Gustave Flaubert (UK /ˈfloʊbɛər/ FLOH-bair, US /floʊˈbɛər/ FLOH-bair,[1][2] French: [ɡystav flobɛʁ]; 12 December 1821 – 8 May 1880) was a French novelist. Highly influential, he has been considered the leading exponent of literary realism in his country. According to the literary theorist Kornelije Kvas, "in Flaubert, realism strives for formal perfection, so the presentation of reality tends to be neutral, emphasizing the values and importance of style as an objective method of presenting reality".[3] He is known especially for his debut novel Madame Bovary (1857), his Correspondence, and his scrupulous devotion to his style and aesthetics. The celebrated short story writer Guy de Maupassant was a protégé of Flaubert. On the occasion of Flaubert's 198th birthday (12 December 2019), a group of researchers at CNRS published a neural language model under his name.[4][5] 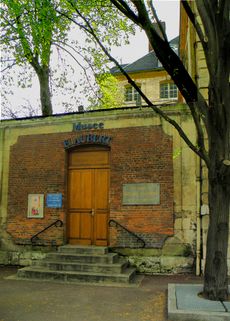 Flaubert was born in Rouen, in the Seine-Maritime department of Upper Normandy, in northern France. He was the second son of Anne Justine Caroline (née Fleuriot; 1793–1872) and Achille-Cléophas Flaubert (1784–1846), director and senior surgeon of the major hospital in Rouen.[6] He began writing at an early age, as early as eight according to some sources.[7]

He was educated at the Lycée Pierre-Corneille in Rouen,[8] and did not leave until 1840, when he went to Paris to study law. In Paris, he was an indifferent student and found the city distasteful. He made a few acquaintances, including Victor Hugo. Toward the end of 1840, he travelled in the Pyrenees and Corsica.[9] In 1846, after an attack of epilepsy, he left Paris and abandoned the study of law.

From 1846 to 1854, Flaubert had a relationship with the poet Louise Colet; his letters to her have survived.[9] After leaving Paris, he returned to Croisset, near the Seine, close to Rouen, and lived there for the rest of his life. He did however make occasional visits to Paris and England, where he apparently had a mistress.

Politically, Flaubert described himself as a "romantic and liberal old dunce" (vieille ganache romantique et libérale),[10] an "enraged liberal" (libéral enragé), a hater of all despotism, and someone who celebrated every protest of the individual against power and monopolies.[11][12]

With his lifelong friend Maxime Du Camp, he travelled in Brittany in 1846.[9] In 1849–50 he went on a long journey to the Middle East, visiting Greece and Egypt. In Beirut he contracted syphilis. He spent five weeks in Istanbul in 1850. He visited Carthage in 1858 to conduct research for his novel Salammbô.

Flaubert never married and never had children. His reason for not having children is revealed in a letter he sent to Colet, dated 11 December 1852. In it he revealed that he was opposed to childbirth, saying he would "transmit to no one the aggravations and the disgrace of existence".

Flaubert was very open about his sexual activities with prostitutes in his writings on his travels. He suspected that a chancre on his penis was from a Maronite or a Turkish girl.[13] He also engaged in intercourse with male prostitutes in Beirut and Egypt; in one of his letters, he describes a "pockmarked young rascal wearing a white turban".[14][15]

According to his biographer Émile Faguet, his affair with Louise Colet was his only serious romantic relationship.[16]

Flaubert was a diligent worker and often complained in his letters to friends about the strenuous nature of his work. He was close to his niece, Caroline Commanville, and had a close friendship and correspondence with George Sand. He occasionally visited Parisian acquaintances, including Émile Zola, Alphonse Daudet, Ivan Turgenev, and Edmond and Jules de Goncourt.

The 1870s were a difficult time for Flaubert. Prussian soldiers occupied his house during the War of 1870, and his mother died in 1872. After her death, he fell into financial difficulty due to business failures on the part of his niece's husband. Flaubert suffered from venereal diseases most of his life. His health declined and he died at Croisset of a cerebral hemorrhage in 1880 at the age of 58. He was buried in the family vault in the cemetery of Rouen. A monument to him by Henri Chapu was unveiled at the museum of Rouen.[9]

His first finished work was November, a novella, which was completed in 1842.[24]

In September 1849, Flaubert completed the first version of a novel, The Temptation of Saint Anthony. He read the novel aloud to Louis Bouilhet and Maxime Du Camp over the course of four days, not allowing them to interrupt or give any opinions. At the end of the reading, his friends told him to throw the manuscript in the fire, suggesting instead that he focus on day-to-day life rather than fantastic subjects.[25]

In 1850, after returning from Egypt, Flaubert began work on Madame Bovary. The novel, which took five years to write, was serialized in the Revue de Paris in 1856. The government brought an action against the publisher and author on the charge of immorality,[9] which was heard during the following year, but both were acquitted. When Madame Bovary appeared in book form, it met with a warm reception.

In 1858, Flaubert travelled to Carthage to gather material for his next novel, Salammbô. The novel was completed in 1862 after four years of work.[26]

Drawing on his youth, Flaubert next wrote L'Éducation sentimentale (Sentimental Education), an effort that took seven years. This was his last complete novel, published in the year 1869.[27]

He wrote an unsuccessful drama, Le Candidat, and published a reworked version of The Temptation of Saint Anthony, portions of which had been published as early as 1857. He devoted much of his time to an ongoing project, Les Deux Cloportes (The Two Woodlice), which later became Bouvard et Pécuchet, breaking the obsessive project only to write the Three Tales in 1877. This book comprises three stories: Un Cœur simple (A Simple Heart), La Légende de Saint-Julien l'Hospitalier (The Legend of St. Julian the Hospitaller), and Hérodias (Herodias). After the publication of the stories, he spent the remainder of his life toiling on the unfinished Bouvard et Pécuchet, which was posthumously printed in 1881. It was a grand satire on the futility of human knowledge and the ubiquity of mediocrity.[9] He believed the work to be his masterpiece, though the posthumous version received lukewarm reviews. Flaubert was a prolific letter writer, and his letters have been collected in several publications.

At the time of his death, he may have been working on a further historical novel, based on the Battle of Thermopylae.[28]

Flaubert famously avoided the inexact, the abstract and the vaguely inapt expression, and scrupulously eschewed the cliché.[29] In a letter to George Sand he said that he spent his time "trying to write harmonious sentences, avoiding assonances".[30][31]

Flaubert believed in and pursued the principle of finding "le mot juste" ("the right word"), which he considered as the key means to achieve high quality in literary art.[32] He worked in sullen solitude, sometimes occupying a week in the completion of one page, never satisfied with what he had composed.[9] In Flaubert's correspondence he intimates this, explaining correct prose did not flow out of him and that his style was achieved through work and revision.[29]

This painstaking style of writing is also evident when one compares Flaubert's output over a lifetime to that of his peers (for example Balzac or Zola). Flaubert published much less prolifically than was the norm for his time and never got near the pace of a novel a year, as his peers often achieved during their peaks of activity. Walter Pater famously called Flaubert the "martyr of style".[32][33][34][35]

In the assessment of critic James Wood:[36]

Novelists should thank Flaubert the way poets thank spring; it all begins again with him. There really is a time before Flaubert and a time after him. Flaubert decisively established what most readers and writers think of as modern realist narration, and his influence is almost too familiar to be visible. We hardly remark of good prose that it favors the telling and brilliant detail; that it privileges a high degree of visual noticing; that it maintains an unsentimental composure and knows how to withdraw, like a good valet, from superfluous commentary; that it judges good and bad neutrally; that it seeks out the truth, even at the cost of repelling us; and that the author's fingerprints on all this are paradoxically, traceable but not visible. You can find some of this in Defoe or Austen or Balzac, but not all of it until Flaubert.

As a writer, other than a pure stylist, Flaubert was nearly equal parts romantic and realist.[29] Hence, members of various schools, especially realists and formalists, have traced their origins to his work. The exactitude with which he adapts his expressions to his purpose can be seen in all parts of his work, especially in the portraits he draws of the figures in his principal romances. The degree to which Flaubert's fame has extended since his death presents "an interesting chapter of literary history in itself".[9] He is also credited with spreading the popularity of the color Tuscany Cypress, a color often mentioned in his chef-d'œuvre Madame Bovary.

Flaubert's lean and precise writing style has had a large influence on 20th-century writers such as Franz Kafka and J. M. Coetzee. As Vladimir Nabokov discussed in his famous lecture series:[37]

The greatest literary influence upon Kafka was Flaubert's. Flaubert who loathed pretty-pretty prose would have applauded Kafka's attitude towards his tool. Kafka liked to draw his terms from the language of law and science, giving them a kind of ironic precision, with no intrusion of the author's private sentiments; this was exactly Flaubert's method through which he achieved a singular poetic effect. The legacy of his work habits can best be described, therefore, as paving the way towards a slower and more introspective manner of writing.

The publication of Madame Bovary in 1856 was followed by more scandal than admiration; it was not understood at first that this novel was the beginning of something new: the scrupulously truthful portraiture of life. Gradually, this aspect of his genius was accepted, and it began to crowd out all others. At the time of his death, he was widely regarded as the most influential French Realist. Under this aspect Flaubert exercised an extraordinary influence over Guy de Maupassant, Edmond de Goncourt, Alphonse Daudet, and Émile Zola.[9] Even after the decline of the Realist school, Flaubert did not lose prestige in the literary community; he continues to appeal to other writers because of his deep commitment to aesthetic principles, his devotion to style, and his indefatigable pursuit of the perfect expression.

His Œuvres Complètes (8 vols., 1885) were printed from the original manuscripts, and included, besides the works mentioned already, the two plays Le Candidat and Le Château des cœurs. Another edition (10 vols.) appeared in 1873–85. Flaubert's correspondence with George Sand was published in 1884 with an introduction by Guy de Maupassant.[9]

He has been admired or written about by almost every major literary personality of the 20th century, including philosophers and sociologists such as Michel Foucault, Roland Barthes, Pierre Bourdieu, and Jean-Paul Sartre, the latter of whose partially psychoanalytic portrait of Flaubert in The Family Idiot was published in 1971. Georges Perec named Sentimental Education as one of his favourite novels. The Peruvian novelist Mario Vargas Llosa is another great admirer of Flaubert. Apart from Perpetual Orgy, which is solely devoted to Flaubert's art, one can find lucid discussions in Vargas Llosa's Letters to a Young Novelist (published 2003). In a public lecture in May 1966 at the Kaufmann Art Gallery in New York, Marshall McLuhan claimed: "I derived all my knowledge of media from people like Flaubert and Rimbaud and Baudelaire."[38]

Biographical and other related publications