Gustavus Adolphus College is a private liberal arts college affiliated with the Evangelical Lutheran Church in America located in St. Peter, Minnesota, United States. A coeducational, four-year, residential institution, it was founded in 1862 by Swedish Americans. To this day the school is firmly rooted in its Swedish and Lutheran heritage. The premier event on campus is the annual Nobel Conference, which features Nobel Laureates and other world-renowned scholars explaining their expertise to a general audience.

The college presents its mission as tied to the fact that it is a church-related college: A "private residential liberal arts college firmly rooted in its Swedish and Lutheran heritage.” While the institution offers many majors, the school also presents itself as a place where "a mature understanding of the Christian faith" is nurtured; so that “students are encouraged to work toward a just and peaceful world.” Many students are involved in volunteer work, and service learning is integrated into many of the courses on campus.[weasel words] 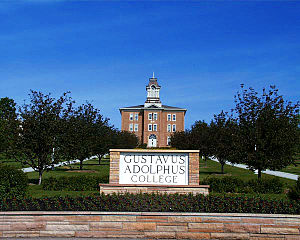 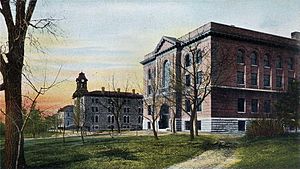 The college was founded in 1862 as a Lutheran parochial school at Red Wing by Eric Norelius, pastor. Originally named Minnesota Elementarskola (elementary school in Swedish), it moved the following year to East Union, an unincorporated town in Dahlgren Township. In 1865, on the 1,000th anniversary of the death of St. Ansgar, known as the "Apostle of the North", the institution was renamed and incorporated as St. Ansgar's Academy.

During World War II, Gustavus Adolphus College was one of 131 colleges and universities nationally that took part in the V-12 Navy College Training Program which offered students a path to a Navy commission.[2]

Founding of the Nobel Conference

The annual Nobel Conference was established in the mid-1960s when college officials asked the Nobel Foundation for permission to name the new science building the Alfred Nobel Hall of Science as a memorial to the Swedish inventor, Alfred Nobel. Permission was granted, and the facility's dedication ceremony in 1963 included officials from the Nobel Foundation and 26 Nobel Laureates. Following the 1963 Nobel Prize ceremonies in Stockholm, college representatives met with Nobel Foundation officials, asking them to endorse an annual science conference at the College and to allow use of the Nobel name to establish credibility and high standards. At the urging of several prominent Nobel laureates, the foundation granted the request, and the first conference was held at the college in January 1965. 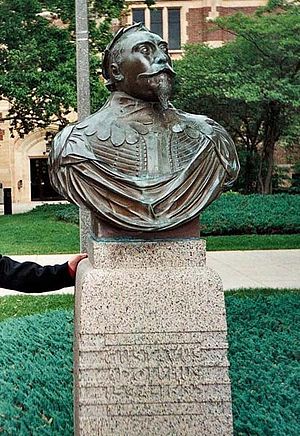 A bust of Gustav II Adolf of Sweden on campus

Gustavus Adolphus is currently ranked among the best 100 national liberal arts colleges by U.S. News & World Report. In 2014, Gustavus ranked 76th rising from 85th in the 2013 rankings.[3] Students choose from over 70 programs of study with 75 majors in 24 academic departments and three interdisciplinary programs (including 14 honors majors), ranging from physics to religion to Scandinavian studies. The College's Writing Across the Curriculum program fosters writing skills in all academic disciplines. Since 1983, the college has had a chapter of the academic honor society Phi Beta Kappa. The school offers an alternative interdisciplinary general education program known as the Three Crowns Curriculum. Recently the college instituted a test-optional admission policy, making it the first private college in Minnesota to forgo the ACT/SAT score requirement on its application.

The campus features science facilities, computer and language labs, and a large, new dining facility. The college's Christ Chapel, which seats 1500 people, stands in the center of campus. Gustavus' first building in St. Peter, affectionately known as "Old Main," originally housed the entire college. Major renovations to the building were completed in 2005. In the Fall of 2011, a new social science center, Beck Hall, was opened on campus. The campus includes 33 sculptures by the late Minnesota sculptor, Paul Granlund, an alumnus of the college who for many years was sculptor-in-residence. Every tree indigenous to Minnesota is grown in the Linnaeus Arboretum. In 2009 students founded Big Hill Farm, which grows produce for the cafeteria and aims to connect the campus to sustainable agriculture. 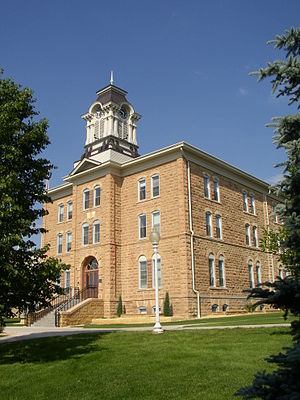 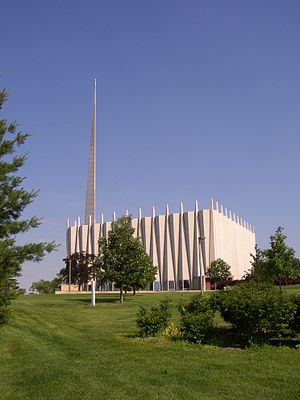 “Old Main” was the first building erected at Gustavus Adolphus College when its cornerstone was laid on August 12, 1875.[4] Contracted to O. N. Ostrom and constructed from Kasota limestone, the total cost of the building was around $25,000.[4] Old Main was completed in 1876 and dedicated on October 31 of that year. Originally referred to as the “School Building,” as more buildings were erected, it became known as the “Main Building” and by 1905, it became commonly referred to as "Old Main."[4]

The building was heated by wood stoves and housed the entire college in the first years of the institution before other buildings were added. It originally contained several classrooms, sleeping quarters for students, faculty, and the president as well as a kitchen, dining room, chapel, library, and museum.[5] Until 1920, it was tradition for seniors to gather on the building’s roof for a sunrise breakfast the morning of commencement.[5]

On its 50th anniversary in 1926, Old Main underwent a renovation from funds provided by the Minnesota Conference.[4] The 1998 tornado, which destroyed much of the Gustavus campus, resulted in the need to repair Old Main’s bell tower. Seven years later in 2005 another renovation was completed; the building now houses the Office of the Chaplains and the religion, political science, philosophy, and classics departments. 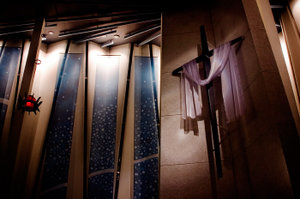 Christ Chapel is a church located in the center of Gustavus Adolphus College. Constructed from March 2, 1959 to fall 1961, the chapel was dedicated on January 7, 1962. Construction of the chapel was made possible by gifts from the congregations of the Lutheran Augustana Synod, a predecessor body of the Evangelical Lutheran Church in America, which is affiliated with the college. Ecumenical services are held each weekday and on Sundays during the academic year. There is seating for 1,500 people in the chapel, with 1,200 on the main floor and an additional 300 in the balcony. It is the largest seating area on campus.

The chapel and surrounding grounds are adorned by the sculptures of Paul T. Granlund, the former artist-in-residence at Gustavus Adolphus College.

The organ in Christ Chapel was originally built by Hillgreen-Lane at the time the Chapel was built. It has been significantly altered in the last 30 years. These renovations, carried out by David Engen and more recently by the Hendrickson Organ Company of St. Peter, include a new console with solid state combination and relay, moving several ranks of pipes from an antiphonal position in the basement into the main organ above the balcony, restructuring the Swell mixture, and extensive repairs following the tornado of 1998. It currently contains 55 speaking ranks of pipes, played from a four-manual console, and has a preparation on the new Great chest for a mounted Kornet V stop.[7]

The Chapel also houses a small portative organ of three stops on one manual which is used for accompanying and especially for continuo playing in Baroque compositions.

On March 29, 1998, the spire, which towers above the chapel, was toppled by a tornado that left most of St. Peter, Minnesota in ruins. On March 17, 2008, the cross that was atop the spire was hung from the ceiling in Christ Chapel during a service marking the 10-year anniversary of the tornado.

The majority of the college's 2,600 students (known as "Gusties") live in residence halls on campus, in college-owned houses, and, a small minority, in theme areas, such as the Carlson International Center, CHOICE substance-free housing, and the Swedish House. Students with permission from the college may choose to live off-campus within the community of St. Peter or elsewhere.

Nearly 1/5 of students are active in Greek life at Gustavus, where there are currently twelve recognized Greek organizations on campus. This includes several Greek organizations founded at Gustavus, including the largest sorority on campus, Delta Phi Omega, the Epsilon Pi Alpha fraternity, Tau Mu Tau sorority, and the Tau Psi Omega fraternity (also known as the Reds).

Many musical ensembles perform throughout the year, including the Gustavus Choir, the Choir of Christ Chapel, the Lucia Singers, the Gustavus Adolphus Symphony Orchestra, Gustavus Wind Orchestra, Gustavus Jazz Lab Band, etc. Theater and Dance events are also a vibrant part of "Gustie Life", with shows every fall and spring and a musical every other year. There are also two art galleries on campus, the Hillstrom Museum of Art and the Schaefer Art Gallery. The college has an independently operated dining service, serving the Market Place cafeteria and Courtyard Cafe. The Princeton Review ranked Gustavus 8th in its "Best Campus Food" category for 2009.

Gustavus is a founding member of the Minnesota Intercollegiate Athletic Conference, MIAC. Key sports at the college are tennis, swimming, golf, basketball, ice hockey, football, and soccer. The school's team name is the Golden Gusties, represented by a lion mascot because Gustavus Adolphus was known as "The Lion of the North." Gustavus has had three players drafted in the NFL Draft: Russ Buckley in 1940, Kurt Ploeger in 1985, and Ryan Hoag in 2003. On March 26, 2014, Gustavus announced it would not continue its men's and women's Nordic skiing team. This will go in to affect in the 2014-2015 school year.

Gustavus Adolphus College is home to several publications and broadcasters: