Hämeenlinna (Swedish: Tavastehus) is a city and municipality of about 68,000 inhabitants[2] in the heart of the historical province of Häme in the south of Finland and is the birthplace of composer Jean Sibelius. Today, it belongs to the region of Tavastia Proper, and until 2010 it was the residence city for the Governor of the province of Southern Finland. Nearby cities include the capital Helsinki (98 km or 61 mi), Tampere (73 km or 45 mi) and Lahti (72 km or 45 mi).

The medieval Häme Castle (Hämeen linna) is located in the city. 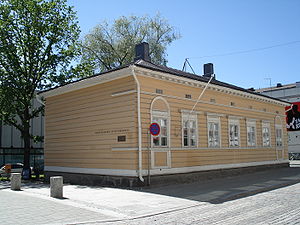 The municipalities of Hauho, Kalvola, Lammi, Renko and Tuulos were consolidated with Hämeenlinna on 1 January 2009.

There was a settlement called Vanaja by the lake Vanajavesi where the city now stands since the Viking Age. The castle was built in the late 13th century to secure Swedish power in central Finland. A village was established near Häme Castle to provide services and goods to its inhabitants.

The village was granted city rights in 1639 and soon after that the King of Sweden moved it one kilometre (0.6 miles) south to the hill on which it still stands.

The city is known for its schools and academies where many famous Finns have studied. Schools, government and the military have characterised Hämeenlinna's life throughout history.

Finland's first railway line opened between Hämeenlinna and Helsinki in 1862. The current Hämeenlinna railway station (Rautatieasema in Finnish) was built in 1921.

The composer Jean Sibelius was born and raised in Hämeenlinna. He graduated from Hämeenlinna Lyseo in 1885.

The folk/Viking metal band Turisas is from Hämeenlinna.

Strongman and actor Jouko Ahola was born in Hämeenlinna. He won the 1997 and 1999 World's Strongest Man, and now serves as one of the judges at the contest.

HC Fribourg-Gottéron forward Antti Miettinen was born in Hämeenlinna in 1980 and returns there in the off-season.

Kimi Räikkönen (Formula One driver) and Jenni Dahlman were married in 2004 in Hämeenlinna.

Largest employers (by number of employees) [6] 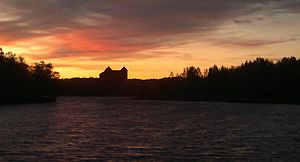 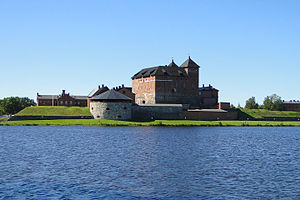 Hämeenlinna is twinned with: