Hafting is a process by which an artifact, often bone, metal, or stone, is attached to a haft (handle[1] or strap). This makes the artifact more useful by allowing it to be shot (arrow), thrown (spear), or used with more effective leverage (axe or hammer). When constructed properly, hafting can tremendously improve a weapon's damage and range. It is estimated that hafted weapons were most common during the Upper Paleolithic and Middle Paleolithic. Hafting was a significant milestone in the history of technology. It was one of the first tools where hominins took separate elements and united them into a single tool increasing the efficiency and use of it. The development of hafting was considered a significant milestone of humans by archaeologists. It was not only a significant improvement in the technology at the time but archaeologists also believed that hafting shows the progression and development of the human mind and shows the path toward a world of complex tool making of the past. The idea of assembling two different kinds of materials into one object that improves the functioning of the tool overall shows the mental capacity of the people of that time and gives archaeologist a better understanding of the progression of human life.

Hafting weapons is perhaps best known for its use by humans in prehistory, but it is still practiced by enthusiasts today and the handle of a tool such as an ax is still known as a haft. Many people still practice the hafting techniques by using old-fashioned methods to figure out the best way to attach a handle onto tools, while improving the overall structure and function. Hafting has evolved through the past and the idea can still be seen in the structure of modern day tools such as hammers, axes, and many other hand tools. The evolution of hand tools such as hammers, and axes would be greatly altered had the people of our past failed to invent the idea of hafting. The methods of hafting and the hafting process have also varied and evolved over the years. 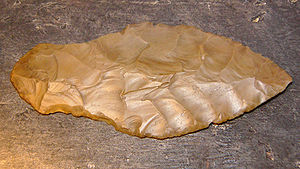 There must be some way to attach the artifact to the strap or shaft, and to this end, flanges are often created on one end (the end opposite the cutting edge). Flanges are produced by a process of knapping or grinding the excess stone away, resulting in indentations in the piece.

If a shaft or handle is to be used, it must also be prepared in some way. Wood is commonly used, and many people prefer Big Leaf Maple due to its soft structure that allows them to easily chip away at the end of the shaft to which the tool is to be affixed. A good piece of wood would have a diameter large enough to provide adequate strength yet small enough to hold comfortably for long periods of time. A common practice of hafting is to remove the outer layer of bark where your hand would be to prevent cuts and the painful imperfections found in bark. Attaching the tool to the shaft can be difficult which is why there are two main methods used to soften the wooden shaft including burning the end, and/or soaking it in water. These soften the material to easily allow the slits to be cut vertically into the center of the shaft. This provides a place for the "head" of the tool or weapon to fit. Alternatively, the shaft may be split down the center which allows the artifact to fully sit within the shaft, and once fully wrapped up, can be much stronger.

The artifact can then be inserted into the slit, and fixed to the shaft by tying around the flanges with a suitable material. Materials such as Australian Sea Grass Cordage, and split deer intestine can be used due to its high strength and durability once installed. Some people will wrap the material around the handle as well to add grip. The main disadvantage with wrapping the tool onto the shaft arises after usage when the fibers lose their tension and become loose. High humidity is also a contributing factor to the fibers losing tension. On occasion, glue is added for extra support. When glue or any other resin is used, the hafting is said to be mastic. Mastic hafts are also very strong and reliable since there is little to no movement of the tool. Glue also has an advantage of absorbing shock when hardened, which helps with cushioning. Back before glue was readily available, people would process deer hide into glue. The main downside of mastic hafts is the time consuming and difficult construction process. Alternatively, the head may simply be forced into the shaft, if the shaft is soft enough, eliminating the need for a slit (and perhaps improving durability). If a strap is used, it is tied directly to the flanges of the artifact.

Generally it takes a much longer time to create the actual haft binding than it does the tool used in the half. The tool, such as a projectile point, typically takes up to twenty minutes whereas the haft binding takes several hours. Often many times throughout a hafts life cycle, the tool will be replaced or sharpened and reattached to the shaft to keep the haft as effective and precise as possible.

More than 125,000 years ago, early Archaic Homo sapiens such as Homo heidelbergensis developed the extensive use of hafted stone tools. Over time, hafting evolved and tools became deadlier with more control. Evolution has brought hafts with small shafts and dull stone tools to longer stronger shafts with sharper, narrower tools that were better suited for piercing and cutting. In much more recent times, hafted axes and weapons have benefited from tapering. By offsetting the diameters of a tool with a cylindrical base, and a hole in the shaft, a much more secure fit can be made, assuring the ax head stays in place. Hafting stone points in particular was an important advancement in the weapons of early humans. These hafted stone points increased the force and effectiveness of these tools therefore allowing people to hunt and kill animals more efficiently. The increased efficiency of hunting and killing animals is believed to have allowed for people of this time to have regular access to meat and other high quality foods. The increase in the consumption of meat around this time could be directly linked to increases in brain size that is reported in the archaeology record of this time. The invention of hafting by people more than hundreds of thousands of years ago has directly contributed to the health and lives of people in the past and also people in the future.

Multiple lines of evidence indicate that ~500,000-year-old stone points from the archaeological site of Kathu Pan 1 (KP1), South Africa, functioned as spear tips.[2] This has led teams of researchers to come to the conclusion that common ancestors of Homo sapiens and Neanderthals started hafting almost 500,000 years ago.