From Infogalactic: the planetary knowledge core
Jump to: navigation, search
This article is about French commune. For other uses, see Haguenau (disambiguation). 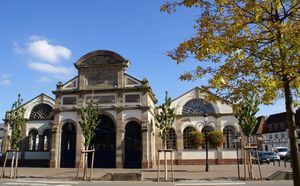 Haguenau (French: Haguenau, pronounced: [aɡəno]; Alsatian: Hàwenau [ˈhaːvənaʊ] or Hàjenöi; German: Hagenau) is a commune in the Bas-Rhin department of France, of which it is a sub-prefecture.

It is second in size in the Bas-Rhin only to Strasbourg, some 30 km (19 mi) to the south. To the north of the town, the Forest of Haguenau (French: Forêt de Haguenau) is the largest undivided forest in France.

Haguenau was founded by German dukes and has swapped back and forth several times between Germany and France over the centuries, with its spelling altering between "Hagenau" and "Haguenau" by the turn. It was last German at the end of World War I, then briefly part of the independent Republic of Alsace-Lorraine before being annexed by France in 1919.

Haguenau dates from the beginning of the 12th century, when the German dukes of Swabia erected a hunting lodge on an island in the Moder River. The medieval King and Holy Roman Emperor Frederick I Barbarossa fortified the settlement and gave it town rights, important for further development, in 1154. On the site of the hunting lodge he founded an imperial palace he regarded as his favourite residence. In this palace were preserved the "Crown Jewels of the Holy Roman Empire", i.e. the jewelled imperial crown, sceptre, imperial orb, and sword of Charlemagne.

Richard of Cornwall, King of the Romans, made it an imperial city in 1257. Subsequently through Rudolph I of Germany (House of Habsburg) Haguenau became the seat of the Landvogt of Hagenau, the German imperial advocatus in Lower Alsace. In the 14th century, it housed the executive council of the Decapole, a defensive and offensive association of ten German towns in Alsace against French aggression and related political instability. In the Peace of Westphalia in 1648, the Alsace was ceded to France, which had, in the past, repeatedly invaded and looted the region. In 1673 King Louis XIV had the fortifications as well as the remains of the king's palace razed in order to extinguish German traditions. Haguenau was recaptured by German troops in 1675, but was taken again by the French two years later, when it was nearly destroyed by fire set by looting French troops.

In 1793 Prussians and Austrians had occupied Lower Alsace from the Lauter to Moder to support the Royalists and before the year's end were driven back over the border by the French Revolutionary Army, causing the “great flight”.

In 1871 Haguenau was ceded to the German Empire upon its victory in the Franco-Prussian War; the community was made part of Alsace-Lorraine, with its Germanic spelling–Hagenau–restored.

The Haguenau Airport was built in 1916 by the German military to train fighter and bomber pilots to fight in World War I.[3]

Hagenau was part of the briefly independent Republic of Alsace-Lorraine after World War I, before being annexed by France in 1919.

In the Second World War, Germany retook the town in 1940. In November 1944 the area surrounding Haguenau was under the control of the 256th Volksgrenadier Division under the command of General Gerhard Franz.[4]

On 1 December 1944, the 314th Infantry Regiment of the 79th Division, XV Corps, 7th U.S. Army, moved into the area near Haguenau, and on 7 December the regiment was given the assignment to take it and the town forest just north that included German ammunition dumps. The attack began at 0645, 9 December, and sometime during the night of 10 December and the early morning of 11 December the Germans withdrew under of the cover of darkness leaving the town proper largely under American control.[5]

Before they withdrew, the Germans demolished bridges, useful buildings, and even the town park. However, as experienced by Haguenau throughout its history, the Germans came back and retook the town in late January. Most of the inhabitants fled with the assistance of the U.S. Army. The Americans launched an immediate counterattack to retake the town.[6] The 313th Infantry Regiment of the 79th Division was relieved by the 506th PIR of the 101st Airborne Division on 5 February 1945.[7] The 36th Infantry Division would relieve the 101st on 23 February 1945.[8] On March 15 the Allied Operation Undertone, a combined effort of the U.S. Seventh and French 1st Armies of the U.S. Sixth Army Group was launched to drive the Germans back along a 75 km line from Saarbrücken to Haguenau. The last German soldier was not cleared out of the town until March 19, 1945, after brutal house-to-house fighting.

Much of the town had been destroyed despite the Allied reluctance to use artillery to clear out the Germans.[9] The town is the site where Medal of Honor recipient Morris E. Crain (Technical Sergeant, U.S. Army, Company E, 141st Infantry, 36th Infantry Division) earned the medal at the cost of his life to give covering fire for his men on 13 March 1945.[10]

The town has a well balanced economy. Centuries of troubled history in the buffer lands between France and Germany have given Haguenau a rich historical and cultural heritage which supports a lively tourist trade. There is also a thriving light manufacturing sector centred on the industrial zone to the west of the town. Here the presence nearby of significant retail developments testifies to Haguenau's importance as a regional commercial centre. The recent extension of the ring road has improved access to the commercial and industrial zones and reduced the traffic congestion which used to be a frequent challenge for vehicle drivers using the road which follows the line of the old town walls on the western side of town. 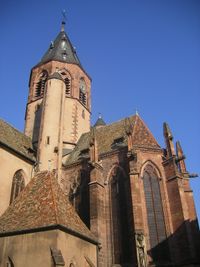 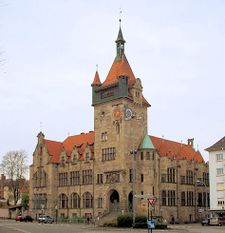 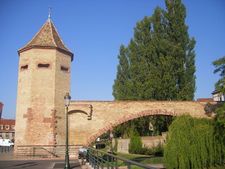 In spite of the extensive destruction Haguenau suffered during the many wars experienced by Alsace, especially the Thirty Years War, the French conquest in 1677 and World War II, she still possesses monuments from nine centuries, even if nothing is left of arguably the most prestigious of them, Frederick I Barbarossa's imperial palace (Kaiserpfalz).

Medieval Haguenau retains three gates from its former fortification, the Tour des Chevaliers (Tower of the knights), the Tour des Pêcheurs (Tower of the fishermen) and the Porte de Wissembourg (Wissembourg gate), two fairly large Gothic churches, Saint-Georges and Saint-Nicolas, an ancient water-mill and the old custom-house (Ancienne Douane). Both Saint-Georges and Saint-Nicolas Church have lost many of their artistic treasures over the centuries, especially their medieval stained glass windows and outside sculptures. Still, both display to this day some fine liturgical furniture (altars, choir stalls, organ cases, church tabernacles, calvaries...). Saint-Nicolas has become the receptacle for the baroque wooden decoration of the church of the destroyed Neubourg Abbey nearby.

French Baroque and classicism has bequeathed the town several buildings, among which the former hospital and the current town hall. The Synagogue (1820) is a fine example of French Neo-classicism, as is the theatre (Théâtre municipal) (1846). The large Hop hall (Halle au houblon) is a good example of historicism in architecture. It was built by the French in 1867 and extended twice by the Germans, in 1881 and 1908.

The Institut universitaire de technologie de Haguenau (IUT) was founded in 2006. It is a branch of the University of Strasbourg.

Haguenau is twinned with Landau (Germany).

Episode Eight of TV WWII Miniseries Band of Brothers is set in Haguenau.