The Halberstadt D.II was a biplane fighter aircraft of the Luftstreitkräfte (Imperial German Army Air Service) that served through the period of Allied air superiority in early 1916. As the first-ever biplane configuration fighter aircraft to serve in combat for the German Empire, it had begun to be superseded in the then-forming Jagdstaffeln by the superior Albatros fighters by the second half of that year, although small numbers of Halberstadts continued in use well into 1917. 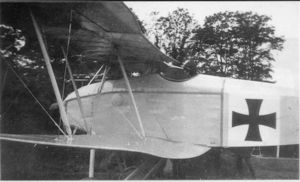 The D.II was the production version of the experimental D.I.[1] Lightened to improve performance, it also featured staggered wings and a more powerful 120 hp Mercedes D.II engine. The side and frontal radiators that had been tried in the D.I were replaced by a wing mounted radiator, similar to that later used by the Albatros D.III and D.V. The two bay wings were very strongly braced, with the trailing edge a wooden member, as opposed to the wire or cable common on many World War I German single-engined aircraft. Photographic evidence indicates that many examples were rigged with washout on the lower wings – giving the impression of a curved or twisted lower wing trailing edge. In some photos even the upper wings have a similar sort of "trailing edge droop" on the fixed section inboard of the ailerons.[2] The cockpit was raised in relation to where it had been on the D.I, which required a dorsal turtledeck to be built up atop the rear fuselage to fair the cockpit into the lines of the fuselage. Lateral control was by ailerons, designed to use a single-forward-projecting control horn for one of the twin aileron cable's connections, with the twin cables for each surface running from the lower fuselage, outwards through the lower wing and upwards to the forward horns and the ailerons' lower surfaces, a common system for early German World War I biplane aircraft that had been used previously on the 1914-vintage DFW B.I unarmed two-seater as just one example, and on the later Albatros D.I fighter that replaced the Halberstadt D.II in 1916. Like the earlier Fokker Eindecker, the Halberstadt D.II had no fixed tail surfaces and over-sensitive "Morane"-style balanced elevators, and rudder with no fixed fin were used for the tail surface design.[3] Although it must have shared the typical "Morane" elevator sensitivity and the controls cannot have been well harmonised, it was very manoeuvrable in skilled hands and could be dived safely at high speed.[4] A single synchronised 7.92 mm (.312 in) lMG 08 "Spandau" machine gun fired through the propeller arc, from a mostly-exterior mount beside the starboard side of the engine cylinders.

If the only performance figures available for the type are accurate, the Halberstadt fighter’s speed and climb were little better than the Eindecker’s and inferior to such Allied contemporaries as the Nieuport 11 and the DH.2 but it earned the respect of Allied fighter pilots[1] and was a preferred mount of the pilots of the early Jagdstaffeln, until the Albatros D.I became available.

Like other early German fighter types, the D.II was at first supplied in ones and twos to the ordinary six-aircraft reconnaissance units or Feldflieger Abteilungen of what would become the Luftstreitkräfte in October 1916, then from February 1916 onward through the summer of that year gathered into small specialised fighter units – the Kampfeinsitzer-Kommandos or "KEK" units. When the first true fighter Jagdstaffeln were formed in mid-1916, the Halberstadt was the best fighter available[4] and was used by Oswald Boelcke to demonstrate his famous pioneering air fighting tactics (the Dicta Boelcke) to the new units (although he is also recorded as flying a Fokker D.III at this period). His Halberstadt was painted bright blue[1] – one of the first documented instances of the gaudy personal finishes applied by German fighter pilots to their mounts for the remainder of the war.

In service, unlike the previous Fokker Eindeckers and succeeding D-series biplanes from every other manufacturer of the era, the Halberstadt-built D-series fighters bore no marked IdFlieg-issued military serial numbers anywhere on their exteriors. The license-built Aviatik and Hannover-constructed examples of the Halberstadt D-series fighters usually had IdFlieg-issued serial numbers on their rear fuselage sides.[5]

As the new Albatros fighters came into service the Halberstadts were quickly replaced, although a few survived into early 1917.[6] Manfred von Richthofen flew a red Halberstadt D.II for a few weeks in February and March 1917, after the spar of his Albatros D.III cracked in combat.

Believed to have been first tried within the first six months of 1916, future German rocketry pioneer Leutnant Rudolf Nebel, then flying as a fighter pilot with Jasta 5, one of the earliest German fighter squadrons within the Luftstreitkräfte, used a Halberstadt D.II aircraft of that unit in the first known German attempt at arming an aircraft with wing-mounted rockets as long range armament. Leutnant Nebel used a set of four improvised tubular launchers, two mounted per side on the wings, with a signal rocket being fired from each tube for the unofficial trial. According to Leutnant Nebel's apparently "undated" account, he took off on a defensive mission when 25 Allied aircraft appeared in the air near Jasta 5's base. He managed to fire his improvised rocket armament at a distance of 100 m (330 ft) from the Allied fighter formation, in a "head-on" attack at it and scared one British pilot into surrendering as the British aircraft landed safely in German territory, with Leutnant Nebel landing no more than 20 m (70 ft) away, to ensure the British pilot's capture. Just over a week later, Leutnant Nebel used his improvised rocket armament again and blew the propeller off an Allied aircraft, causing it to crash land.[7]

In mid-October 1916, another attempt was made to arm a Halberstadt D.II with rockets, this time for observation balloon attacks with a more formal method, using eight Le Prieur-like rockets mounted on the outer wing struts, the way that the French Nieuport 11 had been armed nearly a year earlier. Problems with the ignition system on the rockets prevented the system from being experimented with any further.[8]

In late 1916, the Halberstadt D.II was the first known aeroplane for an official trial, with a special unit named the FT-Versuchsabteilung (Radio Telegraphy Experimental Detachment), with the "FT" possibly meaning Funk-Telegraphie, of air communications using radio communications (via Morse Code) in directing fighter aircraft. IdFlieg sanctioned the test, which resulted in the creation of a radio-telegraphy transceiver for the flight leader's aircraft, weighing 25–30 kg (55-60 lb) along with the battery, aircraft engine-driven generator and aerials. Receiving gear for the other aircraft in a combat formation was similarly devised, with the radio receiver weighing 12.5–15 kg (27.5-33 lb). By early 1917, the FT-Versuchsabteilung was making combat trials with the radio gear with Halberstadt D.III and D.V aircraft and by late September 1917 with the famous Jagdgeschwader I unit commanded by Manfred von Richthofen, especially Jasta 4. Later trials using the more advanced Albatros D.III and Albatros D.Va fighters used the gear for the first attempts at an air-based version of ground-controlled interception of Allied bomber aircraft, using visual ground spotters as the ground component by the home defence Kampfeinsitzerstaffel units.[9]

Aviatik of Germany built the D.II under license. It was originally known as the Aviatik D.I (not to be confused with their Austrian subsidiary's independently-designed Aviatik (Berg) D.I) but was later called the Halberstadt D.II(Av).[10]

The Halberstadt D.III primarily differed from the D.II version in its substitution of the Argus As.II 90 kW (120 hp) straight-six engine, which differed from the usual Mercedes D.II powerplant in having its camshaft in the engine block and using pushrods to operate the overhead valves, rather than having a camshaft running atop all of the cylinders as in a single overhead cam engine. A total of 50 D.III examples were built by Halberstadt, with the first 30 ordered in July 1916 and the last 20 ordered in August 1916.[11]

The D.IV version, of which only three were built to an order placed in early March 1916, changed the wing bracing layout to a single bay, dispensed with the twin bracing struts for the "all moving" vertical tail rudder surface, and used a Benz Bz.III 110 kW (150 hp) straight-six engine for power, with a small conical spinner for better streamlining. Tested by IdFlieg in October 1916, this type was rejected for further evaluation due to a poor forward field of view for the pilot.[12]

The D.V version was a less radical departure from the earlier D.II version and mostly differed from the D.II, in having its four-member cabane strut structure supporting a central panel for the upper wing, rather than both upper wing panel's wing roots meeting along the centreline of the aircraft, for better forward pilot vision. It also used the D.III version's Argus As.II engine and changed the mounting position of the aircraft's 7.92 mm (.312 in) lMG 08 machine gun from the right to the left side of the nose. A total of 57 D.V aircraft were built, from orders placed in October 1916 and January–June 1917, with 31 of these being sent to Germany's ally in the Central Powers, the Ottoman Empire.[13]