Hale County is a county of the U.S. state of Alabama. As of the 2010 census, the population was 15,760.[1] Its county seat is Greensboro.[2] It is named in honor of Confederate officer Stephen Fowler Hale.[3]

Hale County was established following the end of the American Civil War, on January 30, 1867. Located in the west-central section of the state, it was created from portions of Greene, Marengo, Perry, and Tuscaloosa counties. The vast majority came from Greene County. The first American settlers hailed from Georgia, Tennessee, Kentucky, and the Carolinas.[4][5]

Hale County is connected to three major twentieth century artists: Walker Evans photographed the area in 1936 while he collaborated with James Agee on the 1941 book Let Us Now Praise Famous Men. Since the 1960s, artist William Christenberry, born in Tuscaloosa, has been photographing various structures in Hale County as part of his multi-media artistic investigations. More recently, Hale County has become the home of the nationally-recognized Auburn University Rural Studio, an architectural outreach program founded by architect and artist Samuel Mockbee and D. K. Ruth.[5] It is also the birthplace of Eugene Sawyer, the second African American mayor of Chicago.[6]

Since the American Civil War, whites controlled economic and political power in Hale County. However, in 1997 after a highly contested mayoral election the city of Greensboro elected its first black mayor, John E. Owens Jr. In 2006, both black and white county residents came together and elected their first black sheriff, Kenneth W. Ellis, who was formerly the Moundville police chief.[citation needed]

Like many Blackbelt counties, Hale County has experienced economic decline, particularly in the southern end of the county. Many businesses and manufacturing plants have closed in and around Greensboro (the county seat). The northern portion of the county, however, has experienced population and industrial growth due to its close proximity to Tuscaloosa County 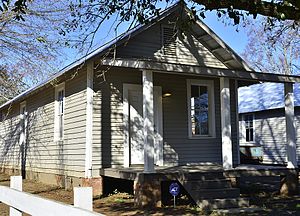 The Farquhar Cattle Ranch, a former Alabama Department of Corrections facility for men,[14] was in an unincorporated area of the county, about 8 miles (13 km) east of Greensboro.[15]

Greensboro, the county seat, is home to the 'Safe House Museum'. On March 21, 1968, Martin Luther King Jr. attended a meeting at Greensboro's St. Matthew Church, and then spent the night in this house where he sought refuge from the Ku Klux Klan. The museum reveals the struggle for equality for African Americans in Alabama, and its curator, Ms. Theresa Burroughs, was both a family friend of King, and a foot soldier in the Civil Rights Movement.[5][16]

Greensboro is also home to a large number of antebellum-era houses and churches, including some that are listed on the National Register of Historic Places such as Glencairn and Magnolia Grove.[5][17]