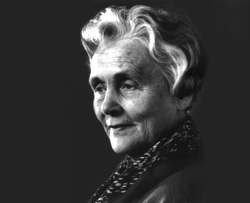 Halldis Moren Vesaas (18 November 1907 – 8 September 1995) was a Norwegian poet, translator and writer of children's books. She established herself as one of the leading Norwegian writers of her generation.[1][2]

She was born on a family farm near Trysil in Hedmark county, Norway. Her father was the Norwegian story writer, poet, and playwright, Sven Moren. She was the eldest and only girl in a family of five children. She attended the teacher college in Elverum 1925-1928, and then held various jobs in Hamar and Oslo. In 1930 she moved to Switzerland, where she worked for three years as secretary. In April 1934, she married the Norwegian author, Tarjei Vesaas (1897-1970). They settled on the Midtbø farm in Vinje in Telemark County where her husband worked as a teacher (1941–43).[3]

She debuted in 1929 at 22 years old with a collection of poetry, Harp and Dagger (Harpe og dolk). Her more notable books of poetry would include Speech of Troubled Times (Tung tids tale), The Tree (Treet), In a Different Forest (I ein annan skog) and House of Life (Livshus). She composed and translated for the theater, especially Det Norske Teatret in Oslo, wrote articles on various topics and was an external publishing consultant. She sat on the board of the Riksteatret (1949-1969). In 1938, her first children's book translation was published. Her writing won great acclaim in Norway for her brave and personal expressions of women's life in its several stages: youth, marriage, motherhood, widowhood and second love in old age.[4]

She was awarded the Mads Wiel Nygaards Endowment in 1977. She was appointed Commander of the Order of St. Olav in 1984. She was also a Knight of the National Order of Merit, France's second-highest order.[5]