In oceanography, a halocline (from Greek hals, halo- ‘salt’ and klinein ‘to slope’) is a subtype of chemocline caused by a strong, vertical salinity gradient within a body of water. Because salinity (in concert with temperature) affects the density of seawater, it can play a role in its vertical stratification. Increasing salinity by one kg/m3 results in an increase of seawater density of around 0.7 kg/m3.

In certain high latitude regions (such as the Arctic Ocean, Bering Sea, and the Southern Ocean) the surface waters are actually colder than the deep waters and the halocline is responsible for maintaining water column stability- isolating the surface waters from the deep waters. In these regions, the halocline is important in allowing for the formation of sea ice, and limiting the escape of carbon dioxide to the atmosphere. Haloclines are also found in fjords, and poorly mixed estuaries where fresh water is deposited at the ocean surface. 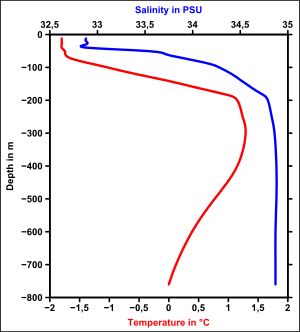 In the plot, one can discern three layers:

A halocline can be easily created and observed in a drinking glass or other clear vessel. If fresh water is slowly poured over a quantity of salt water, using a spoon held horizontally at water-level to prevent mixing, a hazy interface layer, the halocline, will soon be visible due to the varying index of refraction across the boundary.

A halocline is most commonly confused with a thermocline - a thermocline is an area within a body of water that marks a drastic change in temperature.

Haloclines are common in water-filled caves near the ocean. Less dense fresh water from the land forms a layer over salt water from the ocean. For underwater cave explorers, this can cause the optical illusion of air space in caverns. Passing through the halocline tends to stir up the layers.