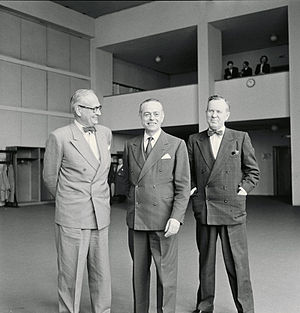 Halvard Lange, left, with Gaetano Martino and Lester B. Pearson, the "three wise men" of NATO, in 1956.

He was arrested by the Nazi German occupying forces in 1942 and spent the rest of the war in various concentration camps.

He was the Norwegian foreign minister from 1946 till 1965, except for a month in 1963 during the administration of John Lyng.

Just before taking the job of foreign minister, he became a member of the Norwegian Nobel Committee in 1945; although he went on leave in 1946, when he took up the foreign minister's job, he remained officially on the committee until 1948. He was viewed as "right-wing" politician in the Norwegian Labour Party, partially because of his strong support for Western alignment.

Mr. Lange was, together with Lester B. Pearson and Gaetano Martino, one of the "three wise men" on the "Committee of Three" advising NATO on ways to strengthen its non-military cooperation. A result of this work was the formation of the NATO Science Programme in 1957.[1]