Hampshire College is a private liberal arts college in Amherst, Massachusetts, United States. It was opened in 1970 as an experiment in alternative education, in association with four other colleges in the Pioneer Valley: Amherst College, Smith College, Mount Holyoke College, and the University of Massachusetts Amherst. Together they are now known as the Five Colleges, or the Five College Area.

The College is widely known for its alternative curriculum, socially liberal politics, focus on portfolios rather than distribution requirements, and reliance on narrative evaluations instead of grades and GPAs. In some fields, it is among the top undergraduate institutions in percentage of graduates who enroll in graduate school. Fifty-six percent of its alumni have at least one graduate degree and it is ranked 30th among all US colleges in the percentage of its graduates who go on to attain a doctorate degree (notably first among history doctorates).[2]

The idea for Hampshire originated in 1958 when the presidents of Amherst, Mount Holyoke, and Smith Colleges, and the University of Massachusetts Amherst, appointed a committee to examine the assumptions and practices of liberal arts education. Their report, “The New College Plan,” advocated many of the features that have since been realized in the Hampshire curriculum: emphasis on each student’s curiosity and motivation; broad, multidisciplinary learning; and close mentoring relationships with teachers.

In 1965, Amherst College alumnus Harold F. Johnson donated $6 million toward the founding of Hampshire College. With a matching grant from the Ford Foundation, Hampshire’s first trustees purchased 800 acres (3.2 km2) of orchard and farmland in South Amherst, Massachusetts, and construction began. Hampshire admitted its first students in 1970.[3]

For several years immediately after its founding in the early 1970s, the large number of applications for matriculation caused Hampshire College to be among the most selective undergraduate programs in the United States.[4] Its admissions selectivity declined thereafter because of declining application popularity. The school's number of applications increased again in the late 1990s, causing increased admissions selectivity since then. The college's rate of admissions is now comparable to that of many other small liberal arts colleges.

The school has been financially challenged since its founding, in large part because the college lacked a founding endowment to rely upon for stability of income, and it relied almost entirely upon tuition income for operations. As of 2012, the endowment was a very modest $35,739,555.[5]

In recent years, the school has been on more solid financial footing, though lacking a sizable endowment. Its financial stability relies on fundraising efforts of its most recent past presidents, Adele Simmons and Gregory S. Prince, Jr.. The College has issued a draft for a "sustainable campus plan" and a "cultural village" making possible the residence of non-profit organizations not affiliated with the school on its campus. The cultural village includes the National Yiddish Book Center and the Eric Carle Museum of Picture Book Art.

On April 1, 2004, president Gregory Prince announced his retirement, effective at the end of the 2004–2005 academic year. On April 5, 2005, the Board of Trustees named Ralph Hexter, formerly a dean at University of California, Berkeley's College of Letters and Science, as the college's next president, effective August 1, 2005. Hexter was inaugurated on October 15, 2005. The appointment made Hampshire one of a small number of colleges and universities in the United States with an openly gay president.[6]

Hampshire College describes itself as "experimenting" rather than "experimental," to emphasize the changing nature of its curriculum. From its inception, the curriculum has generally had certain non-traditional features:

The curriculum is divided into three "divisions" rather than four grades (freshman, sophomore, junior, senior), and students can complete these divisions in varying amounts of time. A student on track to graduate in a traditional four years of college will usually will spend their first year in Division I, their second and third year in Division II and their fourth year in Division III. The divisions each consist of different requirements for students to complete:

The Hampshire College faculty are organized broadly in defined Schools of thought:

The Five College Program in Peace and World Security Studies (PAWSS) is based at Hampshire; its director is Michael Klare.[10] The national reproductive rights organization Civil Liberties and Public Policy (CLPP) operates on Hampshire's campus, where they host an annual conference. [11] In 2014 Hampshire announced the formation of a new concentration, in Psychoanalytic Studies. [12]

Hampshire College is the youngest of the schools in the Five-College Consortium. The other schools are Amherst College, Mt. Holyoke College, Smith College and the University of Massachusetts Amherst.[13]

Students at each of the schools may take classes and borrow books at the other schools, generally without paying additional fees. They may use resources at the other schools, including internet access, dining halls, and so forth. The five colleges collectively offer over 5,300 courses, and the five libraries have over eight million books.[14] The Pioneer Valley Transit Authority (PVTA) operates bus services between the schools and the greater Pioneer Valley area.[15]

There are two joint departments in the five-college consortium: Dance and Astronomy.[16]

In the spring of 2004, a student group calling itself Re-Radicalization of Hampshire College (Re-Rad) emerged with a manifesto called The Re-Making of a College, which critiques what they see as a betrayal of Hampshire's founding ideas in alternative education and student-centered learning. On May 3, 2004, the group staged a demonstration that packed the hall outside the President's office during an administrative meeting. Response from the community has generally been amicable and Re-Rad has made some progress. 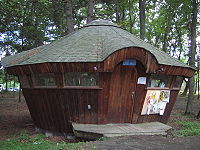 The Yurt is home to Hampshire's student radio station

The Re-Radicalization movement is responding in part to a new "First-Year Plan" that changes the structure of the first year of study. Beginning in the Fall of 2002, the requirements for passing Division I were changed so that first-year students no longer had to complete independent projects (see Curriculum above). Though still a major source of contention, this change is rapidly fading from memory as most students who entered under the old plan have graduated or are in their final year. Re-Rad submitted its own counter-proposal in both 2006 and 2007, but these proposals were not acted on, and no follow-up was attempted.

The Re-Radicalization of Hampshire College assisted the administration in launching a pilot program known as mentored independent study. This program paired ten third semester students with Division III students with similar academic interests to complete a small study—observed by, and subject to the approval of, a faculty member.[17]

While some students worry about what they see as Hampshire's headlong plunge into normality, the circumstances of Hampshire's founding tends to perennially attract students who revive the questions about education the institution was founded on, and who challenge the administration to honor the founding mission. Unsurprisingly, then, Re-Rad was not the first student push of its type. Similar efforts have sprung up at Hampshire with some regularity, with varying impacts. In 1996, student Chris Kawecki spearheaded a similar push called the Radical Departure, calling for a more holistic, organic integration of education into students' lives.[18] The most durable legacy of the Radical Departure was EPEC, a series of student-led non-credit courses.[19] A more detailed account of movements such as these can be found in a history of Hampshire student activities, an account written by alumnus Timothy Shary (F86) that was commissioned by Community Council in 1990; he has subsequently been a faculty member at Clark University of Worcester, Massachusetts, and the University of Oklahoma[20]

In 1979, Hampshire was the first college in the nation to divest from apartheid South Africa (with the nearby University of Massachusetts Amherst second).[21] Legal and financial research undertaken by student Michael Current and faculty member Kurtis Gordon was promoted nationally by business activists Douglas Tooley and Debbie Knight.[citation needed]

In November 2001, a controversial All-Community Vote at Hampshire declared the school opposed to the recently launched War on Terrorism, another national first that drew national media attention, including scathing reports from Fox News Channel and the New York Post ("Kooky College Condemns War"). Saturday Night Live had a regular sketch, "Jarret's Room," starring Jimmy Fallon, which purports to take place at Hampshire College but is inaccurate. It refers to non-existent buildings ("McGuinn Hall," which is actually the Sociology and Social Work building at fellow cast member Amy Poehler's alma mater, Boston College) and features yearbooks, tests, seniors, fraternities, three-person dorm rooms, and a football team—none of which the school has ever had (though in the Fall 2005, 2006, and 2007 semesters the college experienced a higher than expected number of freshmen and temporarily had to convert some common spaces into three-person dorms). The sketch also claims that the college is actually in New Hampshire (a common mistake).

Alumnus Ken Burns wrote of the college: "Hampshire College is a perfect American place. If we look back at the history of our country, the things we celebrate were outside of the mainstream. Much of the world operated under a tyrannical model, but Americans said, 'We will govern ourselves.' So, too, Hampshire asked, at its founding, the difficult questions of how we might educate ourselves... When I entered Hampshire, I found it to be the most exciting place on earth."[citation needed] Loren Pope wrote of Hampshire in the college guide Colleges That Change Lives: "Today no college has students whose intellectual thyroids are more active or whose minds are more compassionately engaged." In 2006, the Princeton Review named Hampshire College one of the nation’s "best value" undergraduate institutions in its book "America’s Best Value Colleges."

Notable past and present faculty

Presidents of the college