The Hanke-Henry Permanent Calendar (HHPC) is a proposal for calendar reform. It is one of many examples of leap week calendars, calendars which maintain synchronization with the solar year by intercalating entire weeks rather than single days. It is a modification of a previous proposal, Common-Civil-Calendar-and-Time (CCC&T). With the Hanke-Henry Permanent Calendar, every calendar date always falls on the same day of the week. 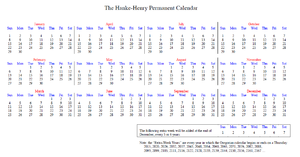 While many calendar reforms aim to make the calendar more accurate, the Hanke-Henry Permanent Calendar focuses on making the calendar perennial, so that every date falls on the same day of the week, year after year.[1] The familiar drift of weekdays with respect to dates results from the fact that the number of days in a physical year (one full orbit of earth around the sun, approximately 365.24 days) is not a multiple of seven. By reducing common years to 364 days (52 weeks), and adding an extra week every five or six years, the Hanke-Henry Permanent Calendar eliminates weekday drift and synchronizes the calendar year with the seasonal change as the Earth circles the Sun. The leap week, or "mini-month", known as "Xtr (or Extra)", occurs every year that either begins or ends in a Thursday on the corresponding Gregorian calendar, and falls between the end of December and the beginning of January.[1] Thus, each year always begins between December 28 and January 3 in the Gregorian calendar. This is effectively the same rule as in ISO week dates.

Under the Hanke-Henry Permanent Calendar January, February, April, May, July, August, October and November have thirty days, while March, June, September, and December have thirty-one, so that each quarter contains two 30 day months followed by one month of 31 days (30:30:31). While the Hanke-Henry Permanent Calendar changes the length of the months, the week and days remain the same.[2] As part of the calendar proposal, time zones would be eliminated and replaced with UTC.

Henry argues that his proposal will succeed where others have failed because it keeps the weekly cycle perfectly intact and therefore respects the Fourth Commandment (Remember the sabbath day, to keep it holy)[3] of Judaism and Christianity. This calendar also urges its own adoption and attempts to convince people it is the best calendar ever proposed. Henry tells supporters of other calendar proposals to support a switch to the C&T.

In 2004, Richard Conn Henry, a professor of astronomy at Johns Hopkins University, proposed the adoption of a calendar known as Common-Civil-Calendar-and-Time, which he described as a modification to a proposal by Robert McClenon. This version had essentially the same structure given above, but inserted its leap week named "Newton" between June and July. The leap rule was chosen to match the ISO week leap rule, to minimise the variation in the start of the year relative to the Gregorian calendar.

He had advocated transition to the calendar on 1 January 2006 as that is a year in which his calendar and the Gregorian calendar begin the year on the same day. After that date passed, he recommended dropping off 31 December 2006 to start in 2007, or dropping 30 and 31 December 2007 to start 2008.[4]

In late 2011 the calendar was revised by Johns Hopkins economist Steve Hanke by moving the leap week from the middle to the end of the year and renaming it "Extra", producing the Hanke-Henry Permanent Calendar. The target date for universal adoption was 1 January 2017 then, but has been postponed to 2018,[5] when the calendar design was changed in early 2016 to adopt Monday as the start of the week, quarter and year, to better comply with existing international standard ISO 8601.

The key difference between Irv Bromberg's calendar proposal Symmetry010 and Hanke/Henry’s is the pattern of month lengths, the former putting the longer month in the middle of each quarter (30:31:30). The more ambitious Symmetry454 furthermore has every month consist of exactly 4 or 5 weeks (28:35:28). Both proposals start the week on Monday and are intended to be used with a different leap rule, resulting in a 293-year leap cycle.

Other proposals, like the Pax Calendar from 1930 and the International Fixed Calendar popularized by Cotsworth and Eastman, feature a perennial calendar with 13 months of 28 days each. The former also has a leap week whereas the latter has one day at the end of each year belonging to no month or week and another in leap years.