Hans-Adolf Prützmann (31 August 1901, Tolkemit, Province of West Prussia - 21 May 1945, Lüneburg) was a Higher SS and Police Leader, as well as an SS-Obergruppenführer. He was a senior Nazi in the administration of Latvia following the German conquest of that country in 1941 and as such was involved to an extent not yet fully determined, in carrying out The Holocaust in the Baltic States.

After completing his studies at the Gymnasium, Prützmann studied agriculture in Göttingen, before he became a member of various Freikorps between 1918 and 1921. Despite being a member, he nevertheless avoided military and typical Freikorps-related aggressive situations. This, however, changed in 1923, when he interrupted his studies to accompany a Freikorps involved in the Upper Silesian uprisings. Afterwards he worked for seven years as an agricultural official in Pomerania, Brandenburg, and East Prussia.

He joined the SA in 1929. Prützmann had become quite a radical soldier as a result of his Freikorps experiences. Since his own personal goals did not match the milder thinking found in the SA, he left the organization in 1930 and transferred to the SS; one of his first command assignments was as the Führer of the 18th SS-Standarte. As of this point in time, Prützmann's career began a steep rise. While a member of the Reichstag, he was appointed SS-Brigadeführer in November 1933, and in February 1934 he was promoted to the rank of SS-Gruppenführer. At the same time, Prützmann was appointed Leader of the SS Upper Division Southwest in Stuttgart. From March 1937 until May 1941, Prützmann led the SS Upper Division Northeast whose headquarters were in Königsberg (now Kaliningrad).

By April 1941, Prützmann had been appointed Generalleutnant (Lieutenant General) of the Police. From June until October 1941, he was Höherer S.S. und Polizeiführer (Higher SS and Police Leader) of Russia-North, the post being responsible for internal security and combatting partisans. He held the same position in Ukraine and Russia-South until the summer of 1944. He also commanded Kampfgruppe "Prützmann" in Ukraine during the early summer of 1944, and was awarded with the German Cross in Gold for his actions.

Role in the Latvia Holocaust 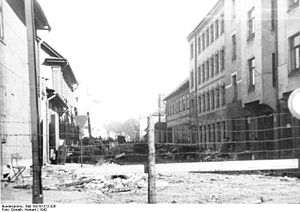 The Riga Ghetto in 1942. Prützmann was responsible for setting up this ghetto. Thousands of Jews were killed here.[citation needed]

From June to November 1941, Prützmann held the post of Higher SS and Police Leader (Höherer SS and Polizeiführer) or HSSPF for Latvia. Effectively this made him ruler or, with,[1] Hinrich Lohse, co-ruler of Latvia. In Latvia killing of Jews and other persons began almost immediately, and at first they were primarily conducted by a mobile killing group (Action Group A (Einsatzgruppe A)). In late July 1941, Einsatzgruppe A moved out of Latvia, and primary responsibility for organizing the murder of Jews then moved to the Latvian office of the SD (Sicherheitsdienst, or Security Service.) As HSSPF Latvia, Prützmann was in charge of the SD and the person responsible for implementing the Final Solution in Latvia.[2]

After the departure of Einsatzgruppe A, a dispute arose among the Nazi rulers of Latvia about their so-called "Jewish problem". One group, headed by Lohse, who was backed by Alfred Rosenberg, wanted to confine the Jews to ghettos, steal all their property, and work them as slave laborers in support of Germany's war effort. Heinrich Himmler, the overall head of the SD, and Prützmann's ultimate boss, wanted the Jews of Latvia murdered right away. Up until November, 1941, the Lohse/Rosenberg faction had somewhat prevailed, and as a result "only" about 30,000 of Latvia's approximately 70,000 Jews had been killed by then. Unhappy with pace at which the SD was murdering people in Latvia, Himmler replaced Prützmann in mid-November 1941 with Friedrich Jeckeln, an experienced murderer who in Ukraine had developed his own "Jeckeln system" of killing 10,000 or more people in a single day. Prützmann was assigned to Ukraine.[2]

Prützmann's precise role as HSSPF Latvia in the murders of Jews and other war crimes in Latvia has never been fully explained. He appears to have been something of a weakling in the struggles the Nazis were having between themselves. It is known that Prützmann was responsible for forcing the Jews of Latvia into ghettos, which allowed them to be later more readily killed by Jeckeln and others. It is also known that when Jeckeln took over as HSSPF Latvia, Prützmann among others reported to him that large numbers of Jews had already been killed.[2]

One of his last promotions came in September 1944 when Prützmann was appointed by Heinrich Himmler as Generalinspekteur für Spezialabwehr (General Inspector of Special Defense) and assigned the task of setting up the Werwolf force's headquarters in Berlin and organizing and instructing the force. Prützmann had studied the guerrilla tactics used by Russian partisans while stationed in the occupied territories of Ukraine and the idea was to teach these tactics to the members of Operation Werwolf.[3] As originally conceived, the Werwolf units were intended to be legitimate uniformed military formations trained to engage in clandestine operations behind enemy lines in the same manner as Allied Special Forces such as Commandos.[4][5]

In early 1945, under orders from Himmler, he directed the assassination of the Allied-appointed mayor of Aachen, Franz Oppenhoff.

Shortly before the war ended, Prützmann was captured by the Allies and became a prisoner of war. While in their custody, he ended his own life. Whether his suicide happened in Lüneburg, or as another account has it, at an interrogation camp at Diest in Belgium is not quite clear, but it seems certain that his date of death was 21 May 1945.