Hans-Georg von Friedeburg (15 July 1895 – 23 May 1945) was a German admiral, the deputy commander of the U-boat Forces of Nazi Germany and the last Commander-in-Chief of the Kriegsmarine. He was the only representative of the armed forces to sign the German instruments of surrender both in Reims on 7 May and in Berlin on 8 May 1945. Generaladmiral von Friedeburg committed suicide shortly afterwards.

Hans-Georg von Friedeburg was born in Strassburg in the German Imperial Territory of Alsace-Lorraine, the son of Prussian officer Karl von Friedeburg (1862–1924). On 1 April 1914 he joined the Imperial Navy as a Seekadett. After the outbreak of World War I, von Friedeburg, promoted to the rank of Fähnrich zur See (Officer Aspirant) served on the dreadnought Kronprinz and took part in the 1916 Battle of Jutland against the British Royal Navy's Grand Fleet. Elevated to Leutnant zur See, he joined the U-boat forces as naval officer on SM U-114 from June to November 1918.

A prominent German naval officer of the post-war period, he was appointed Deputy Commander of the German U-boat fleet in September 1941. Overseeing German U-boat training and deployment of the U-boat bases in France, he later organised U-boat picket lines in the mid-Atlantic to find and attack Allied convoys. Promoted to Rear Admiral in 1942, von Friedeburg assumed command of the German U-boat fleet in February of the following year. He was awarded the Ritterkreuz des Kriegsverdienstkreuzes mit Schwertern on 17 January 1945. He succeeded Grand Admiral Karl Dönitz as Commander-in-Chief of the Kriegsmarine when Dönitz became Reich President upon Hitler's suicide (and per Hitler's last will), and was promoted to general admiral on 1 May 1945. 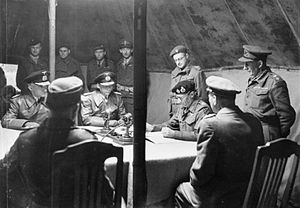 Montgomery (right) and von Friedeburg signing the German surrender at Lüneburg Heath, 4 May 1945

In early May 1945, von Friedeburg was ordered by Dönitz to negotiate the surrender to the Western Allied forces. Arriving at Field Marshal Bernard Montgomery's headquarters in Lüneburg, Germany he was informed that an unconditional surrender to all Allied forces was necessary and not negotiable. Upon receiving permission from Dönitz, he signed an instrument of surrender of all German armed forces in the Netherlands, northwest Germany and Denmark on 4 May 1945.

Von Friedeburg was in Berlin on 8 May 1945, for the signing of the German Instrument of Surrender. Von Friedeburg signed on behalf of the Kriegsmarine, along with Colonel General Hans-Jürgen Stumpff for the Luftwaffe and Generalfeldmarschall Wilhelm Keitel for the Heer and OKW. Marshal Georgy Zhukov and Air Chief Marshal Arthur William Tedder signed for the Soviet Union and SHAEF respectively. Two weeks later, on 23 May 1945, the day the members of the Flensburg Government were arrested, von Friedeburg became a prisoner of war of the British in Plön. Unable to endure the defeat of his country, and having made up his mind in 1944 about this eventuality, he took poison the same day. He was interred in Adelby Cemetery near Flensburg.[1]

His son Ludwig von Friedeburg (1924–2010) was a well-known sociologist and politician (SPD) and served between 1969 and 1974 as minister for culture in the state of Hesse. 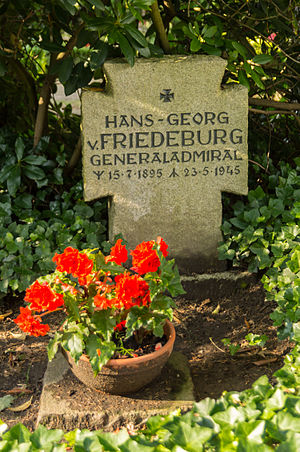