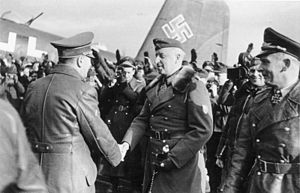 SS-Gruppenführer Hans Baur (19 June 1897 – 17 February 1993) was the Nazi German leader Adolf Hitler's pilot during his political campaigns of the early 1930s. He later became Hitler's personal pilot and leader of the Reichsregierung squadron.[1] Captured by the Soviets at the end of the Second World War in Europe, he endured ten years of imprisonment in the USSR before being released on 10 October 1955 to the French, who then imprisoned him until 1957.

Baur was born Johann Peter Baur in Ampfing, Bavaria and educated at the Erasmus-Grasser-Gymnasium in Sendling-Westpark, Munich.

Baur was called up to the Imperial German Army in 1915, and trained in field artillery at the airfield in Augsburg. He then joined the Luftstreitkräfte (air force) as an artillery spotter. During the war he claimed 6 victories, with 3 additionally unconfirmed.[2] During one flight, Baur's aircraft experienced engine failure and was forced to descend, but he was able to restart the engine. For his victories, Baur was awarded the Iron Cross first class for bravery.[3]

Under the terms of the Treaty of Versailles, Germany had to disband its air force. Baur joined the Freikorps under Franz von Epp, and in the same year became a courier flier for military airmail in Fürth.

In 1926, Baur became a member of the NSDAP (Nazi Party No. 48,113).[4] On 1 April 1931 Baur flew the opening flight of the Berlin-Munich-Rome route, known as the Alpine flight, whose passengers included Nuntius Eugenio Pacelli, Arturo Toscanini and Tsar Boris III of Bulgaria.

Hitler was the first politician to campaign by air travel, deciding that travel by plane was more efficient than travel by railway. Baur first piloted him during the 1932 General Election.[4]

Hitler obtained his first private aeroplane, a Junkers Ju 52/3m with registration number D-2600 (Werk Nr. 4021), in February 1933, on becoming German Chancellor. Powered by BMW 132 licence-built Pratt and Whitney radial engines, it was named Immelmann II after the First World War pilot Max Immelmann.[5] The Fuehrermaschine had a small folding table in Hitler's favourite seat on the right, with a clock, altimeter and airspeed indicator on the bulkhead just in front.

Baur had just became an "air millionaire" of Lufthansa, having flown his millionth kilometre for the airline.[3] As a result of his combination of experience and capability to restart a plane engine in combat, which Hitler took as a sign of fate, Baur was personally selected by Hitler to be his official pilot in February 1933.

Baur was appointed head of the Hitler's personal squadron, initially based at Oberwiesenfeld, Munich.[6] As the Luftwaffe was not yet established, Hitler wanted Baur to be able to command sufficient power and respect to assure his security, and therefore commissioned Baur a Standartenführer (colonel) in the Schutzstaffel (SS No. 171,865).[4]

Upon his arrival in Berlin in 1933, Baur's first task was to expand Hitler's squadron and implement new security procedures. With the approval of then Luft Hansa Director Erhard Milch, an additional Ju 52/3m was designated to meet with Baur's security requirements, named Richthofen.[6] In 1935, 4021 was replaced by 4053, taking the latter's name Buddecke; while 4053 was designated Immelmann II with tail number D-2600.

In 1934, after the death of von Hindenburg, Hitler reorganised the government and created the Regierungsstaffel (Government squadron), making Baur the head. Headquartered at Berlin-Tempelhof Airport, Baur was charged with providing flights and pilots for the Führer's cabinet and for his generals. There were eight planes able to carry 17 passengers each at his disposal. D-2600 remained Adolf Hitler's primary aircraft.[6] 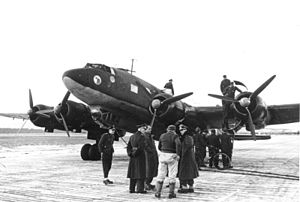 Adolf Hitler's personal Fw 200 Condor, bearing the insignia of the Fliegerstaffel des Führers on its nose

After Hitler became Führer, he increasingly relied on Baur for advice about air war policy and technical developments. He allowed Baur to fill his squadron with experienced Luft Hansa pilots, and train them in military procedures in preparation for the forthcoming war:

Although he tried to convert Baur to vegetarianism, Hitler also invited him to the Reich Chancellery for his favourite meal of pork and dumplings for his 40th birthday, and gave him a Mercedes Benz to replace his personal Ford.[7] In September 1939, the squadron was renamed Die Fliegerstaffel des Führers. Hitler's personal squadron now had a special insignia that was painted on the nose of all planes: a black eagle head on a white background, surrounded by a narrow red ring.[6]

In early 1939, Baur felt that the Führer would be much safer flying in the newly designed Focke-Wulf Fw 200 Condor.[6] Originally configured as a 26-passenger Luft Hansa transport aircraft (Werk Nr. 3099), the plushed-up Condor was named "Immelmann III" registered as D-2600, and it served Hitler until it was destroyed in an Allied bombing raid on 18 July 1944.

On 31 January 1944, Baur was promoted to SS-Brigadeführer (brigadier general) and major general of the police; and on 24 February 1945 became an SS-Gruppenführer (major general) and Generalleutnant of the Police.[4]

During the last days of the war, Baur was with Hitler in the Führerbunker. Baur had devised a plan to allow Hitler to escape from the Battle of Berlin; a Fieseler Fi 156 Storch was held on standby which could take off from an improvised airstrip in the Tiergarten, near the Brandenburg Gate. However, Hitler refused to leave Berlin. On 26 April 1945, the improvised landing strip was used by Hanna Reitsch to fly in Colonel-General Robert Ritter von Greim, appointed by Hitler as head of the Luftwaffe after Hermann Göring's dismissal. During the evening of 28 April, Reitsch flew von Greim out on the same road-strip and Hitler suggested to Baur that he evacuate himself and Martin Bormann the same way.

Baur stayed with him until Hitler committed suicide on the afternoon of 30 April.[8] After Hitler's suicide, Baur found the improvised road-strip too pot-holed for use and overrun by the Soviet 3rd Shock Army. A plan was devised to escape out from Berlin to the Allies on the western side of the Elbe or to the German Army to the North. SS-Brigadeführer Wilhelm Mohnke split up the Reich Chancellery and Führerbunker soldiers and personnel into ten main groups.[9] Baur and Bormann left the Reich Chancellery as part of one of the groups. During his escape, after losing touch with Bormann,[3] Baur was shot in the legs, and the wound was so serious that his right lower leg was later amputated in Posen on 10 June 1945.[10]

Captured by the Soviets in a hospital, Baur was of great interest to his captors, who believed he might have flown Hitler to safety before the fall of Berlin. They also believed he had information concerning stolen art. They especially wanted information concerning the plundering of the Amber Room, (Bernsteinzimmer), in Leningrad. He underwent ten years of imprisonment in the USSR before being released on 10 October 1955 to the French, by whom he was kept prisoner until 1957.[11]

Baur returned to West Germany and in 1957 wrote his autobiography Ich flog mit Mächtigen, which liberally translates as "I flew with [the] mighty." The book was later lengthened and the title was changed to Mit Mächtigen zwischen Himmel und Erde, which translates as "Between Heaven and Earth with [the] Mighty." The French translation is more softly titled J'étais pilote de Hitler: Le sort du monde était entre mes mains, which translates to "I was Hitler's pilot: The fate of the world was in my hands."

The book contains a collection of eyewitness accounts of Hitler's daily activities and conversations and is unique because Hans Baur, as his private pilot and personal friend, was in Hitler's presence practically every day from 1933 to 1945. The book contains an account of the events surrounding the arrest of Ernst Roehm, by Hitler himself, on 30 June 1934 at Bad Wiessee in which Baur took part. The book also tells of Baur's dislike for Hermann Göring (whom Baur describes as a "thick headed glutton"). Hans Baur was one of the few people who was truly close to Hitler. Baur was one of the last persons to see Hitler alive in the Berlin bunker. The book has since been translated into English and is an insider look into Hitler's daily life and doings as leader of the German Reich.

Baur died in Herrsching, Bavaria, of old age ailments in 1993. For a time, his house in Herrsching served as a place of pilgrimage for many veterans of the war. He is interred in the family plot in the Westfriedhof in Munich.[1]

Hans Baur married Elfriede Braur in 1923. Their only daughter Ingeborg was born the following year. After Elfriede Baur's death from cancer in 1935, Baur married again, with Hitler as his best man. His second wife Maria, by whom he had two daughters, died while he was in captivity in the Soviet Union. His third wife, Cresentia, survived him.[7]