After the war he worked for German Chancellor Dr.Konrad Adenauer and then as the speaker of the Amt Blank, later the Minister of Defence, restarting his military career in the Bundeswehr in 1956 as a member of the PANDA Division in Supreme Headquarters Allied Powers Europe (Paris, France), reaching the rank of Oberstleutnant im Generalstab and retiring later to become a journalist as a civilian.

Hans Guhr was born on 24 October 1916 in Dresden, Germany. Like many young Germans, trying to live with his family through the hard times of the post war and the devastating effects of it in the day to day experience, where economy didn't give much for families.[clarification needed] He was an only child, whose father had fought in WWI and survived. In his early years, he was very fond of outdoors activities (completing a bicycle tour in 1934, from Dresden to Sylt), and showing great interest in the army life and horse riding. He would never return to his hometown of Dresden after the war.

After completing high school in 1936, he did the service in the Reichsarbeitsdienst for six month, near Bad Kissingen.

In the begging the 294th Division only took part in the final stages of the French campaign (occupation duty in France for the rest of 1940 and early 1941), and later engage actively in the Balkan campaign. In the first stages of Operation Barbarossa, the Division (which formed part of the 6th Army) took the spearhead of Army Group South, leading the battle deep into soviet soil and achieving very important victories. At this point, Friedrich Paulus was in formal command. Hans would later join the 513th Grenadier Regiment, which was created on 15 October 1942 by the renaming of the 513 Infantry Regiment and the 294th Infantry Division assumed. On 2 November 1943 the II and III Battalion disbanded. The regiment was destroyed in August 1944 in the southern Ukraine. 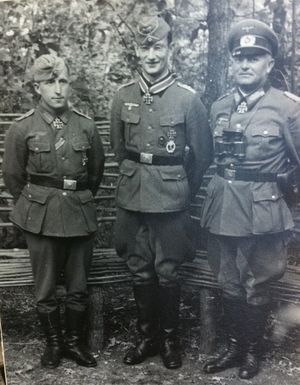 The details of Hans Guhr brave action, which finally got him the Knight's Cross, occurred on 10 September 1942. During the attack carried out by two battalions of the regiment positioned in the bend of the river Don, Lieutenant Guhr - who had been sent to the front line as a liaison - realized that the enemy was bringing in additional forces to a hill overlooking the terrain. Correctly assessing the situation, he concluded that only an immediate and decisive counter-attack would prevent a later attack on the hill that could cost many casualties. He therefore decided to attack the enemy`s defence lines immediately without waiting for any support from the artillery or other heavy weapons. Driving ahead in a jeep and firing his machine gun, he and the few infantry men near him attacked the enemy forces and managed to destroy these in spite of being heavily outnumbered. After overcoming the enemy's resistance, the fortified positions on the hill were taken, over 200 prisoners were captured and all the enemy weaponry was confiscated. However, the enemy also recognized the crucial importance of the hill for further actions and tried for four days to regain their lost positions. They were beaten successfully every time, losing many more soldiers as well as military equipment. Lieutenant Guhr`s bold attack at the top of a few soldiers spared the regiment some heavy fighting.

In Zeithain, Hans met his future wife, Ilse Lemmerzahl who married on 15 November 1942 in Rathaus Schöneberg.

Major Hans Guhr ended the war near of Munich, captured by U.S. forces and released some months later in June 1945 from the prison camp he was held in. At the final days of 1945, just after the end of the conflict in Europe, he started to write some lines about life and war. To become an official reporter of a newspaper in Wiesbaden, he wrote a letter of application and sent a curriculum vitae - four pages and handwritten. He tried to become an interpreter in the office of the prison of Hamelin and worked as an " artist", painting small pictures, colored by his wife.

In 1946 he started his career as a journalist in Hanover (British zone of occupation), and was the first chief reporter of the NWDR (existing as of today) working together with the famous Werner Höfer in the building of the Anzeiger Hochhaus in Hanover. His small office was next to Augstein and Becker, the editors of the Der Spiegel magazine.

In Bonn, Guhr worked for the Rundfunk im amerikanischen Sektor and began to take part collaborating with Dr. Konrad Adenauer. Later he would become third speaker of the Amt Blank.

Hans Guhr re-joined the military service in the newly created Bundeswehr of the Federal Republic of Germany on 5 April 1954. He retired on 1965 holding the rank of Oberstleutnant.

Oberstleutnant Hans Guhr died on 10 February 1969. His son Michael Guhr chose to follow his father’s steps in the Armed Forces of Germany, serving as a Panzergrenadier and reaching the rank of Oberstleutnant and commander of an armored infantry battalion (later infantry battalion of the German/French brigade). He finished in 2006 in the same international staff, SHAPE/MONS, where his father started again his military career.