Hans Jeschonnek (9 April 1899 – 18 August 1943) was a German Generaloberst and a Chief of the General Staff of Nazi Germany′s Luftwaffe during World War II. He committed suicide in August 1943.

Jeschonnek was born in Hohensalza (now Inowrocław) in the Prussian Province of Posen. The son of an assistant secondary school master,[1] he studied at the cadet institute of Lichterfelde. He was commissioned as a Leutnant in 1914 and began flying with Jasta (Fighter Squadron) 40 in 1917.[1] By the time World War I ended, Jeschonnek had shot down two enemy aircraft[1] and received the Iron Cross 1st Class and the Iron Cross 2nd Class.

With the creation of the Reichswehr, Jeschonnek participated in the Silesian Uprisings as a member of the Reichswehr's Cavalry Regiment No. 6.[2] He then worked under Kurt Student in the Army Ordnance Department.[2] Jeschonnek graduated from General Staff training in 1928 as the class valedictorian.[2]

Upon graduation, Jeschonnek worked for a department of the Reichswehr Ministry which was responsible for the building of airplanes prohibited by the Treaty of Versailles. He became the adjutant of Erhard Milch in 1933 and was a protégé of Walther Wever. He was promoted to Captain in Bomber Wing 152 in March 1934 and to Major on 1 April 1935. Jeschonnek served as the Commodore of Training Group III of Air Administrative Area I in Greifswald, which tested aircraft, from 1 October 1936 – 1 October 1937. In the latter year he returned to the Luftwaffe ministry and was promoted to Lieutenant Colonel. Jeschonnek became the Chief of the Luftwaffe Operations Staff on 1 February 1938 and was promoted to Oberst in November of the same year. On 1 February 1939, Jeschonnek replaced Hans-Jürgen Stumpff as the Chief of the General Staff of the Luftwaffe, a position he held until his death. On 14 August 1939, he was promoted to Generalmajor.

On the first day of the invasion of Poland beginning World War II, Jeschonnek called the German Embassy in Moscow to request that the Soviet Union keep its Minsk radio station continually identifying itself, so that German pilots could use it for navigational purposes against Polish targets.[3] He received the Knight's Cross of the Iron Cross on 27 October 1939, after Poland was defeated. With the success of the Luftwaffe in Poland and during the Battle of France, Jeschonnek was promoted to General der Flieger on 19 August 1940.

Although the Luftwaffe had great success during the campaigns against Poland and Battle of France, the poor logistics of the Luftwaffe began to show during the campaigns against Britain, the Soviet Union, and the Mediterranean, especially with the high losses in manpower and materiel. Jeschonnek and Hermann Göring were to blame, as they had underestimated the logistics involved with the campaign.[4] Because Britain continued to resist "the Blitz", Jeschonnek suggested in September 1940 that the Luftwaffe should terror bomb London's residential suburbs, a suggestion declined by Adolf Hitler.[5] Despite the Luftwaffe's failure in the Battle of Britain, Jeschonnek was promoted to Generaloberst on 1 March 1942. 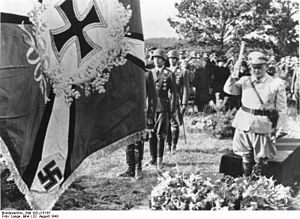 Devotedly loyal to Hitler and feuding with Milch and Göring, Jeschonnek received mounting criticism by Hitler toward the Luftwaffe in general as the branch's capabilities declined during the war.[6] Generalfeldmarschall Albert Kesselring explained:

During the war years, the most impressive personality among the Chiefs of the General Staff was Generaloberst Jeschonnek — an unusually intelligent and energetic person. Even Jeschonnek, however, was not strong enough to oppose Goering successfully (occasionally he did succeed in opposing Hitler) in matters of decisive importance. A very definite lack of harmony brought effective coordination to a standstill.[7] 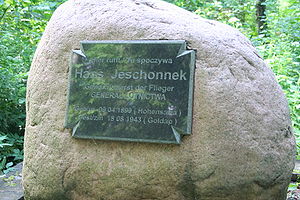 As part of Operation Crossbow, Allied bombing raids struck Peenemünde on the night of August 17–18, 1943; Jeschonnek ordered Berlin's air defenses to fire upon 200 German fighters, in the belief it was enemy aircraft, who had mistakenly gathered near the Reich's capital. When he realized his mistake, Jeschonnek shot himself on August 18, 1943 at Hitler's Wolf's Lair headquarters in Rastenburg, East Prussia.[4] After his death, Eckhard Christian was promoted to Generalmajor and Chief of the General Staff at Hitler's request on 1 September 1944.[8]