Hans Köchler (born 18 October 1948) is a retired professor of philosophy at the University of Innsbruck, Austria, and president of the International Progress Organization, a non-governmental organization in consultative status with the United Nations. In his general philosophical outlook he is influenced by Husserl and Heidegger, his legal thinking has been shaped by the approach of Kelsen. Köchler has made contributions to phenomenology [1][2] and philosophical anthropology[3] and has developed a hermeneutics of trans-cultural understanding [4] that has influenced the discourse on the dialogue of civilizations,[5] particularly as regards the relations between Islam and the West.[6][7] His research in political and legal philosophy—combined with his involvement with the UN—has resulted in a fundamental critique of the state-centered international system and in specific proposals for the democratization of the United Nations Organization [8] and for a viable system of international criminal justice.[9] Köchler has long worked on the philosophical basis of international relations. He came to prominence in the world of international politics when he was nominated by then UN Secretary-General Kofi Annan as an observer at the Pan Am Flight 103 (Lockerbie) bombing trial.

In his student years, Hans Köchler was actively involved as a Board Member of the European Forum Alpbach and established contacts with leading European intellectuals and philosophers such as Manès Sperber, Hans-Georg Gadamer and Rudi Supek of the Praxis school who he invited to his lecture series that he organized from 1969 onwards.[10] At the beginning of the 1970s, he had joined the team around Otto Molden, the founder of the European Forum Alpbach. These were his formative philosophical years; he initially developed an interest in existential philosophy, transcendental philosophy and phenomenology. In particular, he undertook an epistemological critique of Husserl's transcendental idealism][11] and interpreted Heidegger's philosophy of Being in the sense of social critique,[12] opening up—in the Cold War era—a dialogue with humanist philosophers of the Praxis school in Yugoslavia and in Czechoslovakia.[13] As a doctoral student, he also had met in Alpbach with Ernst Bloch, Arthur Koestler and Karl Popper.

In 1972, Köchler graduated at the University of Innsbruck with a doctor degree in philosophy (Dr. phil.) with highest honours ("sub auspiciis praesidentis rei publicae"). In the years following his graduation he expanded his scholarly interest to philosophy of law and later political philosophy.[14] Since the early 1970s he has been promoting the idea of inter-cultural dialogue which—since the last decade—has become known under the slogan of dialogue of civilizations. Köchler first outlined his hermeneutical philosophy of dialogue and his concept of cultural self-comprehension in lectures at the University of Innsbruck (1972)[15] and at the Royal Scientific Society in Amman, Jordan, in March 1974 [16] and discussed that notion in a tour around the world (March–April 1974) for which he got support and encouragement from Austrian Foreign Minister Rudolf Kirchschläger (later to become President of Austria) and in the course of which he met with intellectuals and political leaders on all continents. Among his interlocutors were Yussef el-Sebai, Minister of Culture of Egypt,[17] Prof. S. Nurul Hasan, Minister of Education, Social Welfare and Culture of India, Prince Subhadradis Diskul of Thailand, Charoonphan Israngkul Na Ayudhya, Foreign Minister of Thailand, Prof. Ida Bagus Mantra, Director-General for Culture of Indonesia, and the President of Senegal, Léopold Sédar Senghor.[18] In recognition of his contribution to the dialogue among civilizations he received an honorary doctor degree (Doctor of Humanities honoris causa) from the Mindanao State University (Philippines) (2004).[19] In 2012 he received an honorary doctor degree from the Armenian State Pedagogical University. 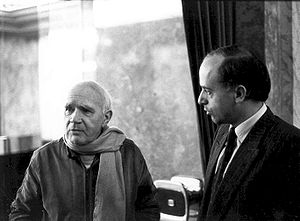 Hans Köchler, right, with French poet Jean Genet who was his guest in Vienna, Austria, for a reading from his text on Palestine in December 1983

In 1982 he was appointed as University Professor of Philosophy (with special emphasis on Political Philosophy and Philosophical Anthropology) at the University of Innsbruck. From 1990 until 2008 he has served as Chairman of the Department of Philosophy at the University of Innsbruck (Austria). At his University, Professor Köchler also has acted as Chairperson of the Arbeitsgemeinschaft für Wissenschaft und Politik (Working Group for Sciences and Politics) since 1971; he was a member of the Doctoral Grants Committee of the Austrian Academy of Sciences (2000–2006) and is Life Fellow—since 2010 Co-President—of the International Academy for Philosophy. Since 2010 he is also a member of the Advisory Board of the Indian Yearbook of International Law and Policy.

Köchler is the recipient of numerous honours and awards such as the History Medal of the Austrian College Society; the award "Apostle of International Understanding" (Unity International Foundation, India); the Honorary Medal of the International Peace Bureau (Geneva); the Honorary Medal of the Polytechnic University of the Philippines; the Royal Datoship of the Sultanate of Marawi (Muslim Mindanao); the Medal of David the Invincible by the Armenian Philosophical Academy; the Gusi Peace Prize (2014). On 18 October 2003 the Hans Koechler Political and Philosophical Society was established in the Philippines.[21] 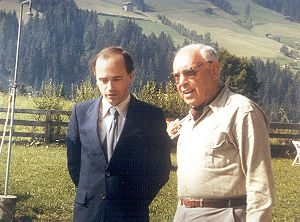 During the 1970s, he co-operated with Cardinal Karol Wojtyła of Kraków, later to become Pope John Paul II, within the framework of the International Society for Phenomenology.[22] He published the first comment articles on the future Pope's anthropological conception.[23] During the 1980s he engaged in a critique of legal positivism (Philosophie—Recht—Politik, 1985) and developed a theory according to which human rights are the basis of the validity of international law (Die Prinzipien des Völkerrechts und die Menschenrechte, 1981). He also dealt with the applicability of democracy in inter-state relations (Democracy in International Relations, 1986). Legal theory led him to questions of political philosophy, and in particular a critique of the representative paradigm of democracy. During the 1990s Köchler got increasingly involved in questions of world order—including the role and philosophical foundations of civilizational dialogue—and in what he has called the dialectic relationship between power and law. On the basis of these reflections, he made major proposals for the reform of the United Nations Organization, in particular the Security Council, and for a comprehensive system of international criminal justice.

Köchler has served in several committees and expert groups dealing with issues of international democracy, human rights and development such as the Research Network on Transnational Democracy sponsored by the European Commission; the Council of Europe's Expert Group on Democratic Citizenship (1998–2000); and the Asia-Europe Foundation’s expert meeting on Cultural, Religious and Social Conceptions of Justice in Asia & Europe (Singapore, 2004).

Köchler calls in his research paper "The “Global War on Terror” and its Implications for Muslim-Western Relations " presented during the International Roundtable Conference at the University of Sains Malaysia, Centre for Policy Research and International Studies (CenPRIS) Penang, Malaysia, during 13-14 December 2007, the "official narrative" of 9/11, told by the American authorities, an "official conspiracy theory". [24] Moreover, he claims that the Western establishment refuses to investigate what really happened on 9/11 and this is part of a collective denial process.[25]

Köchler is the Founder and President (since 1972) of the International Progress Organization (I.P.O.), an international non-governmental organization (NGO) in consultative status with the United Nations and with a membership in over 70 countries, representing all continents. He was the founder and Secretary-General (1973-1977) of Euregio Alpina (Study Group for the Alpine Region), a transnational planning structure for the Alpine region and predecessor of the new concept of the "Euro Regions" in the framework of the European Union. During the 1970s and 1980s Köchler participated in the international phenomenological movement and organized several conferences and colloquia on the phenomenology of the life-world; he was the organizer of the Eighth International Phenomenological Conference in Salzburg (1980) and is the co-founder of the Austrian Society of Phenomenology. Other activities or functions:[26] 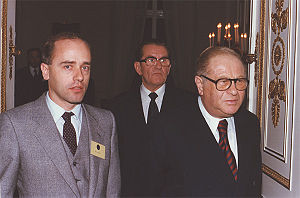 Through his research and civil society initiatives, Professor Köchler made major contributions to the debate on international democracy and United Nations reform, in particular reform of the Security Council. This was acknowledged by international figures such as the German Foreign Minister Klaus Kinkel in 1993. In 1985, he organized the first colloquium on "Democracy in International Relations" on the occasion of the 40th anniversary of the United Nations in New York. With Irish Nobel Laureate Seán MacBride he initiated the Appeal by Lawyers against Nuclear War, which set in motion an international campaign that eventually led to a General Assembly resolution and the issuing of an advisory opinion by the International Court of Justice. As President of the I.P.O. he dealt with the humanitarian issues of the exchange of prisoners of war between Iran and Iraq and with the issue of Kuwaiti POWs and missing people in Iraq. Since 1972, UN Secretaries-General in their statements subsequently acknowledged Professor Köchler's contribution to international peace. 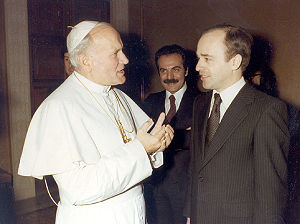 In the framework of his activities as President of the International Progress Organization, he co-operated with numerous international figures such as the Founder President of Senegal, Léopold Sédar Senghor, on the issue of civilizational dialogue; Crown Prince Hassan of Jordan and Cardinal Franz König of Austria on Islamic-Christian understanding;[27] Leo Mates, Secretary-General of the first Non-Aligned summit in Belgrade in 1961, on the principles and future of the non-aligned movement (NAM);[28] Field Marshal Abdul Rahman Sowar el-Dahab, former Head of State of Sudan, on matters of POW exchange and international humanitarian law; Indian President Gyani Zail Singh on issues of international peace; and Sir Thomas Dalyell, former British MP and "Father of the House of Commons," in the case of the criminal investigation into the bombing of Pan Am Flight 103.