Rosenthal grew up in a Jewish family on Winsstraße No. 63, in the Prenzlauer Berg district of Berlin. His childhood was marked by an aggressive antisemitic atmosphere, the result of rising German Nazism. His father died of kidney failure in 1937, after he had lost his job at Deutsche Bank AG. When his mother died of colorectal cancer in 1941, Hans and his younger brother Gert (born 1932) found themselves in the orphanage. Starting in 1940, Hans was forced to participate in unfree labour, while his brother was deported and like many other relatives died in the Holocaust. After Hans escaped the last deportation of German Jews (German: Fabrikaktion) in February 1943, he went into hiding and until 1945 was able to stay at a safe house in a small garden allotment in Berlin-Lichtenberg, where three German women helped him to survive. 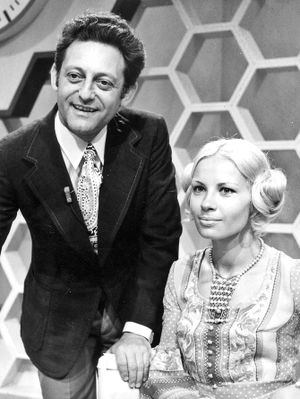 The most popular of these, the TV show Dalli, Dalli (derived from Kashubian: dali, dali! or Polish: dalej!, "Hurry Up!"), aired 153 times from 1971 to 1986. Celebrities had to compete in several fast-paced quiz rounds and games of skill, critiqued by a panel of judges. Even today, Rosenthal is known in Germany for his catchphrase Sie sind der Meinung, das war ... ? ("So you all think that was... ?") when he thought something impressive had been done. The TV audience then answered Spitze! ("Great!"), at which point Rosenthal would jump into the air. Because he was not tall, he was often referred to affectionately as Hänschen Rosenthal (literally "Little Hans").

He was a member of the Central Council of Jews in Germany from the 1960s onwards. He often took his vacation in Utersum on the island of Föhr, of which he was eventually made an honorary citizen. From 1965 until 1973 Rosenthal was chairman of the Tennis Borussia Berlin football club. Rosenthal started a foundation called Schnelle Hilfe in Akuter Not (which roughly translates as "Fast Help in Dire Need").

In 1980, Rosenthal published his autobiography Zwei Leben in Deutschland ("Two Lives in Germany"). In 1986, along with Paul Spiegel, he started an international media agency, which promoted actors, TV presenters and artists. In the same year Rosenthal fell ill with stomach cancer and was no longer able to work as a TV host. He died in 1987 in Berlin, aged 61.