Hans Speidel (28 October 1897 – 28 November 1984) was a German general and diplomat, who was one of the major military leaders of West Germany during the early Cold War. The first full General in West Germany, he was a principal founder of the Bundeswehr and a major figure in German rearmament, integration into NATO and international negotiations on European and Western defence cooperation in the 1950s. He served as Commander of the Allied Land Forces Central Europe (COMLANDCENT) from 1957 to 1963 and then as President of the German Institute for International and Security Affairs from 1964.

Speidel joined the German Army in 1914, fought in the First World War, and stayed with the Army as a career soldier after the war. He served as chief of staff to Field Marshal Erwin Rommel during the Second World War and was promoted to lieutenant general in 1944. Speidel participated in the 20 July Plot to assassinate Hitler, and he was tasked with recruiting Rommel for the resistance. After the plot failed he was arrested by the Gestapo. At the end of the war, he escaped from Nazi prison and went into hiding. He was the only major player in the 20 July Plot to survive the war.

During the early Cold War, Speidel emerged as one of the major military leaders of West Germany, and played a key role in German rearmament, Western international negotiations on defence cooperation and West German integration into NATO. He is thus regarded as one of the founders of the Bundeswehr. He was appointed as the military advisor of Chancellor Konrad Adenauer in 1950 and joined the predecessor of the Federal Ministry of Defence in 1951, was the West German chief delegate to the conference on the Treaty establishing the European Defence Community from 1951 to 1954 and was a lead negotiator when West Germany joined NATO. In 1955 he became a director-general in the Federal Ministry of Defence with the military rank of lieutenant-general in the Bundeswehr, and in 1957 he became the first officer to be promoted to full General in West Germany. He served as COMLANDCENT from 1957 to 1963, with headquarters at the Palace of Fontainebleau in Paris. Speidel was also a historian by training, taught at the University of Tübingen and wrote several books. He received the Grand Cross with Star and Sash of the Order of Merit of the Federal Republic of Germany in 1963. In 1964 he became President of the German Institute for International and Security Affairs, the German government's main think tank in international relations.

He was the father of Brigadier General Hans Helmut Speidel and the father-in-law of European Commissioner and liberal politician Guido Brunner. A German Army military base, the General Dr Speidel Barracks, was named in his honour in 1997. 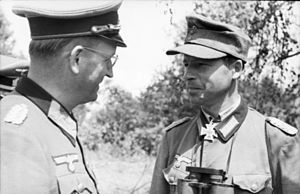 On 26 August 1944, Speidel answered the phone when Alfred Jodl, the OKW chief of staff, called Field Marshal Walter Model, commander in chief of the western front, with Hitler's order to start targeting Paris immediately with V1 and V2 rockets. Model was not in. Speidel never did pass on the order to his superior.[1] He had studied in Paris and knew how valuable and culturally important the art in Paris was. 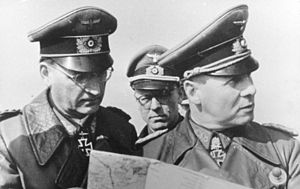 Speidel, a professional soldier and nationalist conservative, agreed with those aspects of Hitler's policy that returned Germany to its place as a world power, but disagreed with the Nazis' racial policies. He was involved in the 20 July Plot to kill Hitler and had been delegated by anti-Hitler forces to recruit Rommel for the conspiracy, which he had cautiously begun to do prior to Rommel's injury in a British strafing attack on 17 July 1944. Speidel managed to become Rommel's confidant, purely by chance: Lucie Rommel, after having an argument with the wife of Alfred Gause (Rommel's then Chief-of-Staff) about who had the more honourable place at a wedding, decided to not only evict the Gause couple out of her house but to order her husband to dismiss Alfred Gause as well. Rommel chose Speidel, a fellow Swabian, as his new Chief-of-Staff.[2][3]

Following the assassination attempt, the Gestapo rounded up, tortured and executed some five thousand Germans, including many high-ranking officers. Speidel's involvement was suspected by the Gestapo, and he was arrested on 7 September 1944. Rommel, in his final letter to Hitler of 1 October 1944, appealed for Speidel's release, but received no answer. Speidel appeared before an Army court of honour. According to an affidavit left by Heinz Guderian and Heinrich Kirchheim, during interrogation he blurted out Rommel's name. Maurice Remy comments that Speidel's testament did not truly betray Rommel, although Speidel probably blamed himself until his death for his revered Field Marshal's fate afterwards. Unknown to Speidel though, his statement offered nothing new or startling to the interrogators, who had already obtained from other co-conspirators the information that Rommel not only knew but agreed with the assassination.[4] Gerd von Rundstedt, Heinz Guderian and Wilhelm Keitel refused to expel him from the German Army. Thus he was not compelled to appear before Roland Freisler's People's Court, which would have been a death sentence. He was jailed for seven months by the Gestapo. As Allied forces approached the location where he was held, he slipped from his captors and went into hiding. He was freed by French troops on 29 April 1945.

In 1950, Speidel was one of the authors of the Himmerod memorandum which addressed the issue of rearmament (Wiederbewaffnung) of the Federal Republic of Germany after World War II. As an important military adviser to the government of Konrad Adenauer, he was instrumental in the creation of the Bundeswehr, and later as a four-star general (the first to be awarded this rank by the Bundeswehr, together with Adolf Heusinger), he oversaw the smooth integration of the Bundeswehr into NATO.[5][6] 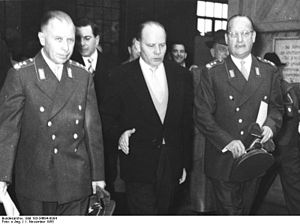 According to an article in Der Spiegel, which cited documents released by the Bundesnachrichtendienst in 2014, Speidel may have been part of the Schnez-Truppe, a secret illegal army that veterans of the Wehrmacht and Waffen-SS established up from 1949 in Germany.[7]

After the war Speidel served for some time as professor of modern history at Tübingen and in 1950 published his book Invasion 1944: Rommel and the Normandy Campaign before being involved in both the development and creation of the new German Army (Bundeswehr) which he joined, reaching the NATO rank of full general. He was subsequently appointed Supreme Commander of the Allied NATO ground forces in Central Europe in April 1957, a command that he held until retirement in September 1963. His headquarters were at the Palace of Fontainebleau in Paris.

In 1960, Speidel took legal action against an East German film studio which portrayed him as having been privy to the assassinations of King Alexander I of Yugoslavia and French Foreign Minister Louis Barthou in 1934, as well as having betrayed Field Marshal Erwin Rommel to the Nazis after the 20 July Plot in 1944. He successfully claimed damages for libel.[8] 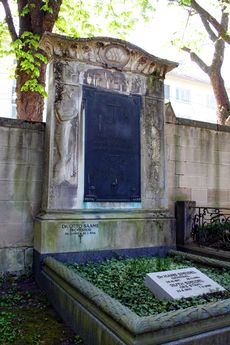