From Infogalactic: the planetary knowledge core
Jump to: navigation, search
For other uses, see Hardwood (disambiguation).

Hardwood is wood from dicot angiosperm trees. The term may also be used for the trees from which the wood is derived; these are usually broad-leaved temperate and tropical forests. In temperate and boreal latitudes they are mostly deciduous, but in tropics and subtropics mostly evergreen. Hardwood contrasts with softwood (which is from gymnosperm trees).

Hardwood should not be confused with the term "heartwood", which can be from hardwood or softwood. 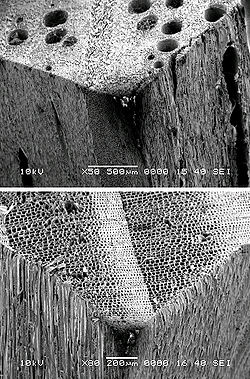 Hardwoods are produced by angiosperm trees that reproduce by flowers, and have broad leaves. Many species are deciduous. Those of temperate regions lose their leaves every autumn as temperatures fall and are dormant in the winter, but those of tropical regions may shed their leaves in response to seasonal or sporadic periods of drought. Hardwood from deciduous species, such as oak, normally shows annual growth rings, but these may be absent in some tropical hardwoods.

Hardwoods have a more complex structure than softwoods and are often much slower growing as a result. The dominant feature separating "hardwoods" from softwoods is the presence of pores, or vessels.[1] The vessels may show considerable variation in size, shape of perforation plates (simple, scalariform, reticulate, foraminate), and structure of cell wall, such as spiral thickenings.

As the name suggests, the wood from these trees is generally harder than that of softwoods, but there are significant exceptions. In both groups there is an enormous variation in actual wood hardness, with the range in density in hardwoods completely including that of softwoods; some hardwoods (e.g., balsa) are softer than most softwoods, while yew is an example of a "hard" softwood.

Hardwoods are employed in a large range of applications, including fuel, tools, construction, boat building, furniture making, musical instruments, flooring, cooking, barrels, and manufacture of charcoal. Solid hardwood joinery tends to be expensive compared to softwood. In the past, tropical hardwoods were easily available, but the supply of some species, such as Burma teak and mahogany, is now becoming scarce due to over-exploitation. Cheaper "hardwood" doors, for instance, now consist of a thin veneer bonded to a core of softwood, plywood or medium-density fibreboard (MDF). Hardwoods may be used in a variety of objects, but are most frequently seen in furniture or musical instruments because of their density which adds to durability, appearance, and performance. Different species of hardwood lend themselves to different end uses or construction processes. This is due to the variety of characteristics apparent in different timbers, including density, grain, pore size, growth and fibre pattern, flexibility and ability to be steam bent. For example, the interlocked grain of elm wood (Ulmus spp.) makes it suitable for the making of chair seats where the driving in of legs and other components can cause splitting in other woods.

There is a correlation between density and calories/volume. This makes the denser hardwoods like oak, cherry, and apple more suited for camp fires, cooking fires, and smoking meat, as they tend to burn hotter and longer than softwoods like pine or cedar whose low-density construction and highly-flammable sap make them burn quickly and without producing quite as much heat.