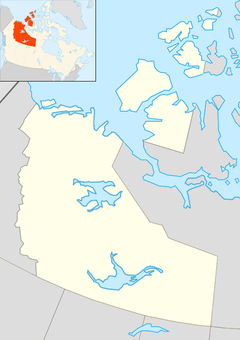 Slavey (/ˈsleɪvi/;[5] also Slave, Slavé) is an Athabaskan language spoken among the Slavey First Nations of Canada in the Northwest Territories where it also has official status.[6] The language is written using Canadian Aboriginal syllabics or the Latin script.

Northern Slavey is an amalgamation of three separate dialects:

The division of Slavey dialects is based largely on the way each one pronounces the old Proto-Athapaskan sounds *dz *ts *ts’ *s and *z.

The consonant inventories in the dialects of Slavey differ considerably. The table above lists the 30 consonants common to most or all varieties. Hare lacks aspirated affricates (on red background), which have merged into fricatives, whereas Mountain lacks /w/ (on blue). In addition, for some speakers of Hare, an alveolar flap /ɾ/ has developed into a separate phoneme.

The most pronounced difference is however the realization of a series of consonants that varies greatly in their place of articulation:[verification needed]

In Slavey proper, these are dental affricates and fricatives; comparative Athabaskan work reveals this to be the oldest sound value. Mountain has labials, with the voiceless stop coinciding with pre-existing /p/. Bearlake has labialized velars, but has lenited the voiced fricative to coincide with pre-existing /w/. The most complicated situation is found in Hare, where the plain stop is (as in Bearlake) a labialized velar, the ejective member is replaced by a /ʔw/ sequence, the voiceless fricative is (as in Mountain) /f/, into which the aspirated affricate has collapsed, and the voiced fricative has (again as in Bearlake) been lenited to /w/.

The following phonological and phonetic statements apply to all four dialects of Slavey.

In Slavey orthography, high tone is marked with an acute accent, and low tone is unmarked.

Tones are both lexical and grammatical.

Slavey morphemes have underlying syllable structures in the stems: CV, CVC, CVnC, V, and VC. The prefixes of the stem occur as Cv, CVC, VC, CV, and C.

Slavey, like many Athabascan languages, has a very specific morpheme order in the verb in which the stem must come last. The morpheme order is shown in the following chart.

A Slavey verb must minimally have positions 13 and 14 to be proper. Here are some examples:

Slavey has three different genders, one of which is unmarked. The other two are marked by go- and de-. These prefixes are added to verb themes. Only some verb themes, however, allow gender prefixes.

Go- is used for nouns that mark location in either time or space. The gender pronoun can be a direct object, an oblique object or a possessor. Here are examples of each [7]

“S/he is painting the house"

“in the shelter of the house"

“floor of the house"

Some examples of these areal nouns are house (ko̜̒e̒), land (de̒h), river (deh), and winder (xay).[7]

De- marks wood, leaves and branches. This gender is optional: some speakers use it and others do not. Examples of its use follows[7]

“A bird’s nest is located"

“S/he is splitting wood"

“They two got stuck in a narrow passage"

The plural is marked with the prefix go-. [7] Dahgogehthe

Like most Athabaskan languages, Slavey has a multitude of classifications. There are five basic categories that describe the nature of an object. Some of these categories are broken up further.[7]

"A clothlike object is in the water" [7]

Slavey has only one structural tense: future. Other tenses can be indicated periphrastically.[7]

“it is just starting to heal"

Perfective is represented in position 11.

"S/he talked for a long time."

The perfective can also be used with a past tense marker to indicate that at the point of reference, which is sometime in the past, the event was completed [7]

“He had built a house"

Imperfective indicates that the reference time precedes the end of the event time.

“I saw him building a house"

Slavey is a verb-final language. The basic word order is SOV.[7]

"The man made the boat"

"The dog bit the child"

girl REFL.mother for parka made.

"The girl made a parka for her mother."

Possessive pronoun prefixes are found in Slavey. These pronouns have the same forms as the direct and oblique object pronouns. The prefixes are listed below with examples.

“I made his/her slippers."

“S/he made his/her slippers."

“our blanket, your pl. blanket"

“Their dog is fast."

“I washed their clothes."

There are both coordinating and subordinating conjunctions in Slavey.

“I cut some wood and then I warmed myself up inside."

people some berry 3 picks and some 3 opt.fish

“Some people will pick berries and some will fish."

“I was supposed to watch the children but he did it instead."

moose 3pl. shoot if 1sg.for thanks

“If they shoot a moose, I'll be grateful."

“Whenever Dora wants to comb my hair, she combs it."

1sg. opt.go to sleep before woodbox 3 is full 1sg. made area

“Before I went to bed, I filled to woodbox."

“I lived here since I was born."

“Because the wood is wet, I can't make fire."

There are three important parts to a relative clause. There is the head, which is the noun that is modified or delimited. The second part is the restricting sentence. The sentence modifies the head noun. The last part is the complementizer.[7]

“the man whom I talked to is tall."

“I saw the dog that chased the rabbit."

North and South Slavey are recognized as official languages of the Northwest Territories; they may be used in court and in debates and proceedings of the Northwest Territories legislature. However, unlike English and French, the government only publishes laws and documents in North and South Slavey if the legislature requests it, and these documents are not authoritative.

In 2015, a Slavey woman named Andrea Heron challenged the territorial government over its refusal to permit the ʔ character, representing the Slavey glottal stop, in her daughter's name, Sakaeʔah, despite Slavey languages being official in the NWT. The territory argued that territorial and federal identity documents were unable to accommodate the character. Heron had registered the name with a hyphen instead of the ʔ when her daughter was born, but when Sakaeʔah was 6, Ms. Heron joined a challenge by a Chipewyan woman named Shene Catholique-Valpy regarding the same character in her own daughter's name, Sahaiʔa.[8]

Also in 2015, the University of Victoria launched a language revitalization program in the NWT, pairing learners of indigenous languages including Slavey with fluent speakers. The program requires 100 hours of conversation with the mentor with no English allowed, as well as sessions with instructors in Fort Providence.[9]

Slavey was the native language spoken by the fictional band in the Canadian television series North of 60. Nick Sibbeston, a former Premier of the Northwest Territories, was a Slavey language and culture consultant for the show.