George Harold "Harry" Beadles (28 September 1897 – 29 August 1958) was a Welsh professional footballer and Wales international. A World War One veteran, he served in the 7th battalion of the Royal Welch Fusiliers, taking part in operations in Turkey, where he was awarded the Serbian Gold medal for his actions in saving a Serbian officer,[2] and Palestine.

On his return to Britain, he played over 100 games in The Football League during his playing career for Liverpool, where he was part of consecutive First Division title winning sides in 1921–22 and 1922–23, Cardiff City and Southport and won 2 caps for Wales in 1925.[3]

One of seven children, Beadles was born in Llanllwchaiarn, on the outskirts of Newtown, Powys, to Thomas, a quarryman who worked on building dams in the Elan Valley Reservoirs among others, and Sarah Ann Beadles (nee Pearce). As a child he attended a local board school as his parents were keen on him receiving an education due to the economic climate in the area but he was forced to leave at the age of 12 in order to help support his family and he instead took up employment at a local warehouse, owned by Pryce Pryce-Jones, as a furrier. His brother Albert had also previously worked at the warehouse but had been killed at the age of 12 after being hit by one of the carts used by the warehouse which was taking part in a parade. Pryce-Jones reportedly paid for the funeral.[4] 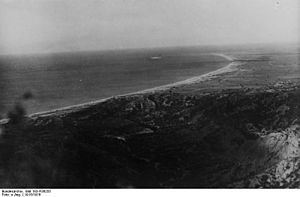 The Suvla Bay in 1915 where Bealdes took part in operations

On the outbreak of World War I in 1914 Beadles, along with two of his older brothers, Ewart and Ernie, enlisted in the Royal Welch Fusiliers, even though he was only 16 years old at the time, under the permitted age of enlistment. While his regiment were stationed in Britain on training exercises, Beadles was a bugle boy but, in 1915, his unit took part in the landing at Suvla Bay in Gallipoli where, despite still being under the minimum age, he served on the frontline as a rifleman. During this time, Beadles performed an action that would later see him awarded the Serbian Gold medal for gallantry.[5] He was awarded the medal after saving the life of a Serbian observer officer who had been wounded in no man's land and was unable to make it back to the line. Under heavy rifle and artillery fire, Beadles helped the officer back, having his cap and epilates shot off in the process but remained unharmed.[4]

He remained on the frontline until December 1915, when the area was evacuated due to the heavy fighting. Due to the extreme cold, Beadles was suffering from frostbite and was found floating and unconscious in the water at the time of the evacuation and was subsequently sent to a military hospital in Malta. After recovering he was sent to re-join his regiment, who were now stationed in Palestine. He took part in all three attempts to capture Gaza and the eventual push to take Jerusalem under the command of Edmund Allenby. During the second battle of Gaza, Beadles witnessed the death of his uncle Richard Pearce who was shot in the head while standing next to him. His brother Ewart was awarded the Military Medal and promoted to the rank of Sergeant for his actions during the battle.[4]

After the conclusion of the war, his unit remained in Palestine until mid 1919. It was here that he met former Wales international George Latham who was a captain in the regiment and the pair would go on to be lifelong friends. During their time in Palestine, Latham and Beadles played football for their divison, the 7th battalion of the Royal Welch Fusiliers, and won the British Forces in Egypt Football League Cup Final in 1919.[4][6]

On his return to Wales, Beadles played for his local side Newtown during th 1919–20 season, winning the Montgomeryshire & District Football League,[7] The following year, he moved to Merseyside, where he turned out for amateur team Graysons of Garston of the West Cheshire Association Football League, a local side that represented a local shipping company, whilst working for the company. Beadles often commented on his role at the company, believing he was only employed due to his footballing skills as he would spend most working days making tea.[8] In June 1921, he signed for Liverpool, one of the leading teams in the country at the time, along with teammate Danny Shone.[4] He made his debut on 24 September 1921 in a 1-0 victory over Chelsea and scored 6 goals in his first 11 appearances for the side as they went on to win the Football League First Division title. However he was never a regular in the side, making just 18 appearances in all competitions during his three years at the club, and struggled to displace the more established players. Following being part of back-to-back league titles, he was given a gold watch by the club.[9] During his time at Anfield, he played in the 1922 FA Charity Shield defeat against Huddersfield Town, however he became frustrated with his lack of playing time and the club not allowing him to play for Wales in order to cover for players who were being called up by England.[4]

He moved to Cardiff City in 1924 where his friend George Latham was working on the training staff. Signed as a replacement for Joe Clennell who had joined Stoke City, Beadles made his debut in a 1-1 draw with Tottenham Hotspur.[5] A consistent scorer at the club, including scoring in the quarter-final of the FA Cup against Leicester City, he was part of the side that reached the 1925 FA Cup Final before losing 1-0 to Sheffield United.[10] During his time at the club Beadles won two caps for Wales, playing in consecutive matches on 14 and 28 February 1925 against Scotland and England in the 1924–25 British Home Championship,[11][12] before being sold to Sheffield Wednesday in order to raise money due to the recession.

Beadles never played in the first team at Sheffield Wednesday, only ever making appearances in the reserve team, and was allowed to join Southport in 1926 where he spent three seasons as captain, finishing as the club's top scorer in all three seasons before leaving the club in April 1929 due to a persistent knee injury, scoring a hat-trick in his final ever game in the Football League, a 6–2 victory over Hartlepool United on 27 April 1929. He spent a short time as a player-coach at Dundalk, making his debut on 25 August 1929 in a match against Shamrock Rovers,[9] but soon retired from football at the end of the season after persistent injuries and his family being unable to settle in Ireland.[4][13][8]

After returning to Merseyside, Beadles spent a short time as a prison officer at Walton jail whilst also working at a local sports equipment retailer. After leaving the jobs he joined Bents Brewery, who at the time were recruiting former professional footballers to front their business. After training as a manager in one of the company's pubs and hotels, he was handed control of The Shakespeare pub in White Chapel and later the Cattle Market Inn in Stanley. Having become an avid Liverpool supporter after his time at the club, Beadles became well known for his final bar calls at the pub, declaring "Time gentlemen please, and Evertonian's".[9]

He impressed the brewery's managers so much that he was put in charge of the company's main hotel, The Hillside in Huyton, Liverpool in 1939 and the pub later became popular with American officers who were stationed at nearby RAF Burtonwood during the Second World War. In the late 1940s, his health declined and he was unable to continue running such a large hotel and, after running a smaller pub, he was forced into early retirement in the 1950s. After a long illness he died on 29 August 1958 at the age of 60 in the village of Sychdyn.[4]