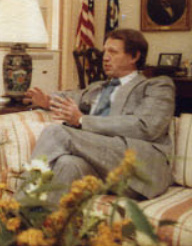 Harry G. Barnes graduated from Amherst College and Columbia University, and served in the U.S. Army from 1944-46. He entered the Foreign Service as consular officer in Bombay, in 1951 and was head of the consular section in Prague in 1953–55. He was publications procurement officer in Moscow in 1957–59. In 1959–62 he was political officer in the Office of Soviet Affairs in the Department of State. He attended the National War College in 1962–63. In 1963–67 he was Deputy Chief of Mission in Kathmandu. Barnes served as Deputy Chief of Mission in Bucharest in 1968–71. After returning to Washington he served as supervisory personnel officer (1971–72) and deputy executive secretary (1972–74) before being named Ambassador to Romania by Richard Nixon.[4]

Although the American government, in particular Henry Kissinger, had supported the rise of dictator Augusto Pinochet, by 1988 the Chilean people started to campaign against extending his rule. Barnes supported the ultimately successful effort, angering Pinochet, who called him "Dirty Harry."[5]

He retired from government service in 1988.

Between 1994 and 2000 he served as the director of the Carter Center's Human Rights and Conflict Resolution Programs from 1994-2000. During this time, he traveled to North Korea and worked on Carter Center initiatives in this area.[6]