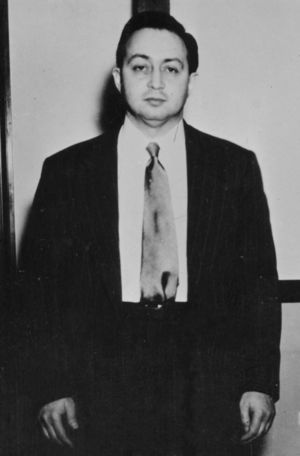 Harry Gold after his arrest by the FBI

Harry Gold (December 11, 1910 – August 28, 1972) was a laboratory chemist who was convicted of being the courier for a number of Soviet spy rings during the Manhattan Project.

Gold was born in Philadelphia, Pennsylvania, to Russian Jewish immigrants. As a young man he became interested in socialism which eventually led him to contacts within the Communist movement.[citation needed]

In 1940, Harry Gold was activated for Soviet espionage by Jacob Golos, but he was not a recruited agent of the rezidentura. This changed in the late 1940s when Soviet Case Officer Semyon Semenov appropriated Gold from Golos.[2] Gold became a formally recruited Soviet agent at this time, and was assigned the codename GUS, or GOOSE. Semenov remained Gold's control officer until March 1944.

In 1950, Klaus Fuchs was arrested in England and charged with espionage. Fuchs confessed that while working in the United States during World War II he had passed information about the atom bomb to the Soviet Union. Fuchs denied working with other spies, except for a courier who collected information from him. When initially shown photographs of suspects, including Gold, he failed to identify him as the courier, but did so after subsequent prompting.[3]

Under interrogation, Gold admitted that he had been involved in espionage since 1934 and had helped Fuchs pass information about the Manhattan Project to the Soviet Union by way of Soviet General Consul Anatoli Yakovlev. Gold's confession led to the arrest of David Greenglass. His testimony resulted in the arrest, trial and execution of Julius and Ethel Rosenberg, though he was later accused by defenders of the Rosenbergs of being a somewhat unreliable witness. Gold's biographer Allen Hornblum has countered these claims, defending the accuracy of Gold's testimony and the tremendous amount of detailed information that he provided to investigators.[4]

Gold was sentenced in 1951 to thirty years imprisonment and was paroled in May 1965, after serving just under half of his sentence. He died in 1972 in Philadelphia, age 62;[5] he was interred in Har Nebo Cemetery in Philadelphia County, Pennsylvania.