Hartwick Pines State Park is a 9,672 acres (39.14 km2) state park in the US state of Michigan, located in Crawford County near Grayling and Interstate 75. It is the third largest state park on Michigan's Lower Peninsula and the state's fifth-biggest park overall. The park contains an old growth forest of white pines and red pines that resembles the appearance of all of Northern Michigan prior to the logging era.

The Hartwick Pines are a 49 acres (0.20 km2) old-growth remnant of a pine grove that was withdrawn from logging by a local timbering firm in 1927. At that time, very little old-growth pine remained in northern Michigan. One of the heirs of the firm's original owners, Karen Michelson Hartwick, donated the grove, which was then 85 acres (0.34 km2) in size, and 8,000 surrounding acres (32.4 km2) of cutover land to the state of Michigan as a memorial to the logging industry.

The state accepted the gift and worked with the Civilian Conservation Corps (CCC) to build the Hartwick Pines Logging Museum adjacent to the grove. The museum was erected in 1934–1935. It contains recreated exhibit rooms, photographs and artifacts of the lumber boom years of northern Michigan. The museum is located in two replica logging camp buildings and also contains outdoor exhibits of logging equipment and an enclosed steam-powered sawmill that is operated during summer special events. The Logging Museum is administered by the Michigan Department of History, Arts and Libraries' Michigan Historical Museum.

The last remaining virgin maple and beech hardwood forest in the state is at Warren Woods State Park. 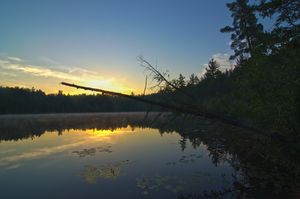 Bright Lake in the park

The Michigan Forest Visitor Center opened in 1995 and is a year-round facility. The building contains an exhibit hall on the history of the forests in Michigan, an auditorium, classroom space, a bookstore operated by the non-profit Friends of Hartwick Pines and restrooms.

A State Recreational Passport is required to enter the park. Visitors are encouraged to park at the visitor center and walk an accessible trail to the big trees. The Old Growth Forest Trail to the pine grove is a loop 1 1⁄4 miles (2.0 km) long. The Old Growth Forest is an even-aged stand of pines estimated to be between 350 and 375 years old. The tallest trees are between 150–160 feet tall, and have a girth of more than four feet DBH (Diameter at breast height). These Eastern White Pine are some of the largest trees in the eastern United States.

Hartwick Pines State Park also contains a campground, a day use area, and a network of four-season trails for summer hiking and winter cross-country skiing. The park offers a number of programs and special events throughout the entire year.

There are two foot trails on the south side of M-93. The wooded Au Sable River foot trail is approximately three miles in length and takes hikers across the East Branch at two different locations. The Mertz Grade Trail winds through forest and field for approximately two miles and was named for the early logging railroad spur it shares for a portion of its distance. Sallin Hansen Lumber Company heavily logged much of the property within Hartwick Pines State Park during the 1880s and 1890s. The Civilian Conservation Corps planted many of the park's trees in the 1930s as part of a massive restoration effort. Hence, this forest is known as "second growth." There are four small lakes located within the State Park. Two of the lakes were originally named Bright and Star Lake. However, there were too many Star Lakes so they settled on Bright and Glory Lake. The Visitor Center has an auditorium that can seat 105 people and an extraordinary nine-projector multi-image slide show. The show is approximately 14 minutes long and shares the story of logging from past right up until today. The Auditorium is used for presentations and programs.[1]

Changes in drilling technology are making it possible to drill for oil and gas under historically nonproductive strata in northern Michigan, including sections of state forests. The state of Michigan decided in September 2014 not to auction off mineral rights under Hartwick Pines.[2]