Gottlob Hartwig Alfred Michael von Ludwiger,[1] best known as Hartwig von Ludwiger, was a German high-ranking officer during World War II and a recipient of the Knight's Cross of the Iron Cross with Oak Leaves. The Knight's Cross of the Iron Cross and its higher grade Oak Leaves was awarded to recognise extreme battlefield bravery or successful military leadership. Hartwig von Ludwiger was responsible for numerous atrocities committed throughout the Balkans. After the war, he was executed by the Yugoslavs as a war criminal.[2][3][4][5]

He also had two sons, both of whom were killed during World War II; Gottlob Hanns-Jochen von Ludwiger (4 June 1921 - 23 September 1942) eventually reached the rank of Oberleutnant and was killed south of Sinyavino.[5][6] Gottlob Klaus-Detlev von Ludwiger was born on 24 August 1923. He rose to the rank of Leutnant and fell near Toruń, Poland on 19 February 1945.[5][6]

Hartwig von Ludwiger was called to the Prussian Army on 17 (or 19) August 1914, shortly after the outbreak of World War I, as an officer candidate.[4] He fought in World War I with the 11th Grenadier Regiment, after being commissioned a Leutnant on July 30, 1915.[1][4] Von Ludwiger served in various platoons and companies as commander and participated in several well-known battles of the "Great War" in the Western Front – the battle of Champagne, the battle of Arras, the battle of Somme, the battle of Flandres and the battle of Maas – earning the Iron Cross 1st Class for his bravery.[4] He was also wounded in action several times and was awarded the Wound Badge in Silver.[7]

After the capitulation of the German Empire in 1918, he was retained in the Reichswehr. During the early 1920s, he was involved in the suppression of the Silesian Uprisings.[1] He rose to the rank of Leutnant (July 1925) and to that of Oberleutnant (1930). Serving in various Infantry Regiments during the military mobilization following Adolf Hitler's rise to power, he was named commander of the 3rd Battalion of the 28th Infantry Regiment in 1936, having the rank of Major.[1] Two years later, on 1 April 1938, he was promoted to Oberstleutnant.[3]

On 1 March 1940, von Ludwiger was appointed commander of the 83rd Infantry Regiment of the 28th Infantry Division, with which he took part in the Invasion of France.[1][3][4] Following Operation Barbarossa, he was awarded the Knight's Cross of the Iron Cross on 15 July 1941, after distinguishing himself "numerous times" in the area of Smolensk in the early stages of the campaign, and was promoted to Oberst on 1 September 1941.[1][3][4] Due to the heavy casualties his regiment (and the division as a whole) suffered while fighting in the Moscow Offensive, the 28th Infantry Division was moved to occupied France to refit as a Jäger (literally "Hunter", the German equivalent of the Rifles) Division on 1 December.[1][3] The 28th Jäger Division was sent back to the front in southern Ukraine, where it participated in the heavy fighting on the Crimean peninsula and especially in the Strait of Kerch.[1] Von Ludwiger was the 163rd officer to be awarded the Oak Leaves on his Knight's Cross for his actions during the battles on 23 December 1942.[3] During his award ceremony, he met his future superior, Hubert Lanz, and his future subordinate Harald von Hirschfeld.[8]

Von Ludwiger was quite active in the anti-Partisan operations. In particular, he was placed in command of a unit consisting mainly of the 724th Jäger Regiment and a Bulgarian regiment, designated Kampfgruppe von Ludwiger (Battle Group von Ludwiger).[11] Aided by the Italian Taurinense Division, Kampfgruppe Ludwiger was tasked with the obliteration of armed guerrillas in the area of Montenegro, mainly Chetniks and Tito's communist partisans. This campaign was launched on 20 May under the codename Fall Schwarz (Case Black).[10] But, as partisans deliberately avoided open battles with the well-equipped German forces (at least in Ludwiger's sector), the overall action of the Kampfgruppe returned rather poor results. Subsequently, the unit was dissolved on 9 June and Ludwiger with his staff returned to Požarevac.[11]

Of course, Ludwiger didn't quit his activities concerning the suppression of partisans. But with chances of extermination of the partisan forces themselves being slim, in the meanwhile Ludwiger launched a terror campaign against the civilian population.[12] Specifically, he implemented the typical 50:1 reprisals ratio, which ordered the execution of 50 civilian hostages for every German killed by partisan activity. As a result, in two months' time, from 1 April to 1 June, Ludwiger's superior, supreme commander of Military District Serbia, General Paul Bader, was virtually flooded with Ludwiger's requests for reprisals, but he nevertheless authorized them. In total, 500 civilians were killed in reprisals for the murder of 8 German soldiers and 2 Serbian mayors from partisans, while numerous villages were looted and torched.[12] 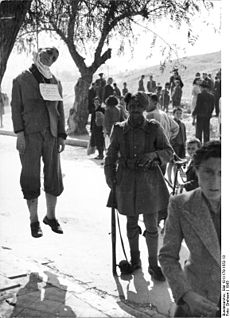 The body of a hanged man, guarded by a man of the collaborationist Security Battalions, in public view, Greece 1943

Upon completion of Operation Black, 104th Jäger Division was ordered to move to Western Greece. While on march to Agrinio, on 10 July, the 2nd Company of the division's Pioneer Battalion was ambushed near the Trichonida Lake by Greek guerrillas, who were reported to be dressed like British soldiers. Two officers and 16 soldiers were killed, while another 20 were wounded and several vehicles were destroyed.[13] The next day, an officer was killed from a hand grenade tossed on his vehicle. Ludwiger, installing his headquarters in Agrinio, applied to carry out his usual reprisal tactics against civilians, but this time his request was rejected from the staff of Army Group "E", as the Germans initially tried to maintain good relations with the Greek population. Despite this, German forces razed a village near Nafpaktos and executed 12 "suspicious gangsters".[14]

After the Allied invasion of Sicily, Italian forces signed an armistice with the Allied troops. The Germans were prepared for this possibility and launched Operation Achse to forcibly disarm Italian troops in southern France and the Balkans. The 1st Company of the 724th Battalion of Ludwiger's division was ordered to disarm the Italian garrison in Kefalonia along with the 1st Mountain Division, something that resulted in one of the largest executions of POWs to be committed during World War II: the massacre of the Acqui Division in September 1943.[Notes 1]

Hartwig von Ludwiger was promoted to Generalleutnant on 1 January 1944.[3] As of by August 1944, Ludwiger's forces continued the reprisals against the Greek population, now aided by SS divisions.[15] Ludwiger wrote in his report that

In the meanwhile however, after the Soviets launched their large summer counteroffensive, Operation Bagration, the German forces in the Balkans faced encirclement. The Germans had evacuated most of mainland Greece by the end of October 1944, but with Romania and Bulgaria defecting to the Soviet Union, Axis forces were stuck in bitter fighting in the northern Balkans, facing guerrilla forces now supported by the Red Army. Towards the end of the war, on 29 April 1945, Ludwiger was promoted to General of the Infantry and took command of XXI. Gebirgs-Armeekorps (XXI Mountain Army Corps).[Notes 2][3][9]

Ludwiger and the surviving elements of his division, which had suffered heavy casualties in the Balkans, were captured towards the end of the war.[2][16] His successor in command of 104th Jäger Division, Generalleutnant Friedrich Stephan was captured as well and was shot in Ljubljana along with three other generals without trial from Yugoslav partisans in early June.[17] Possibly von Ludwiger was captured by Red Army soldiers and was then handed over to the Yugoslavs on 13 May.[3][16]

After being held in a POW camp, von Ludwiger was put on trial before a Yugoslavian court-martial in Belgrade (during the 6th Process of the Yugoslav war crimes trials of German officials) between 27 March and 4 April 1947, along with several German officers, such as Generalmajor Hans Gravenstein and SS-Brigadeführer und Generalmajor der Waffen-SS Karl von Oberkamp, all of whom received the death penalty.[9] Von Ludwiger was specifically indicted for

[...] Harassment, torture and murder of POWs and prisoners of the People's Liberation Army, for torching, looting, kidnapping of non-combatants to concentration camps and violent crimes against women and children.[2]

List of notable decorations and awards presented to Ludwiger throughout his military career:[16]