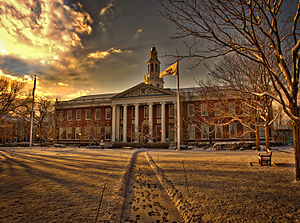 The school started in 1908 under the humanities faculty, received independent status in 1910, and became a separate administrative unit in 1913. The first dean was historian Edwin Francis Gay (1867–1946).

This school of business and public administration was originally conceived as a school for diplomacy and government service on the model of the French Ecole des Sciences Politiques. The goal was an institution of higher learning that would offer a master of arts degree in the humanities field, with a major in business. In discussions about the curriculum, the suggestion was made to concentrate on specific business topics such as banking, railroads, and so on....Professor Lowell said the school would train qualified public administrators whom the government would have no choice but to employ, thereby building a better public administration.... Harvard was blazing a new trail by educating young people for a career in business, just as its medical school trained doctors and its law faculty trained lawyers.[2]

Although the Wharton School of the University of Pennsylvania was the first business school in the United States in 1881, Harvard Business School was the first school to grant an MBA program in 1908. From the start the school enjoyed a close relationship with the corporate world. Within a few years of its founding many business leaders were its alumni and were hiring other alumni for starting positions in their firms.[3][4][5]

At its founding, the school accepted only male students. The Training Course in Personnel Administration, founded at Radcliffe College in 1937, was the beginning of business training for women at Harvard. HBS took over administration of that program from Radcliffe in 1954. In 1959, alumnae of the one-year program (by then known as the Harvard-Radcliffe Program in Business Administration) were permitted to apply to join the HBS MBA program as second-years. In December 1962, the faculty voted to allow women to enter the MBA program directly. The first women to apply directly to the MBA program matriculated in September 1963.[6]

HBS is consistently ranked among the leading business schools in the world. It was ranked 1st in the United States by U.S. News & World Report[13] in 2016.

In the MBA ranking aggregator Poets & Quants, Harvard Business School was ranked 1st in the world.[16]

Students can join one or more of the more than 80 clubs on campus. The Student Association (SA) is the main interface between the MBA student body and the faculty/administration.

The Summer Venture in Management Program (SVMP) is a one-week management training program for rising college seniors designed to increase diversity and opportunity in business education. Participants must be employed in a summer internship and be nominated by and have sponsorship from their company or organization to attend.[17] 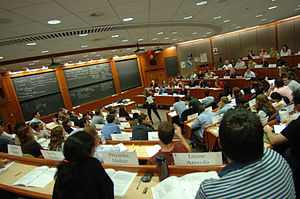 Inside a Harvard Business School classroom

In fall 2010, the Sir Dorabji Tata Trust, and the Tata Education and Development Trust, which are philanthropic arms of the Tata Group gave HBS its biggest ever international donation of $50 million. This donation is funding Tata Hall, named after Ratan Tata (AMP '75), the chairman of Tata Sons Ltd.[18] The facility will be devoted to the Harvard Business School's mid-career Executive Education program. It will be seven or eight stories tall with about 150,000 gross square feet. It will house approximately 180 bedrooms in addition to academic and multi-purpose spaces.[19]

Located in the northeast corner of the HBS campus, Tata Hall will complete the Executive Education quad, which currently includes McArthur, Baker, and Mellon Halls (residence), McCollum and Hawes (classroom), Kresge (dining), and Glass (administration). Its construction started in December 5, 2011 and its completion is scheduled for December 2013.[20]