From Infogalactic: the planetary knowledge core
Jump to: navigation, search
For the architecture program at Harvard University, see Harvard Graduate School of Design. 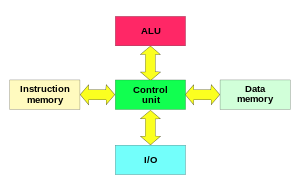 The Harvard architecture is a computer architecture with physically separate storage and signal pathways for instructions and data. The term originated from the Harvard Mark I relay-based computer, which stored instructions on punched tape (24 bits wide) and data in electro-mechanical counters. These early machines had data storage entirely contained within the central processing unit, and provided no access to the instruction storage as data. Programs needed to be loaded by an operator; the processor could not initialize itself.

Today, most processors implement such separate signal pathways for performance reasons, but actually implement a modified Harvard architecture, so they can support tasks like loading a program from disk storage as data and then executing it.

In a Harvard architecture, there is no need to make the two memories share characteristics. In particular, the word width, timing, implementation technology, and memory address structure can differ. In some systems, instructions can be stored in read-only memory while data memory generally requires read-write memory. In some systems, there is much more instruction memory than data memory so instruction addresses are wider than data addresses.

A modified Harvard architecture machine is very much like a Harvard architecture machine, but it relaxes the strict separation between instruction and data while still letting the CPU concurrently access two (or more) memory buses. The most common modification includes separate instruction and data caches backed by a common address space. While the CPU executes from cache, it acts as a pure Harvard machine. When accessing backing memory, it acts like a von Neumann machine (where code can be moved around like data, which is a powerful technique). This modification is widespread in modern processors, such as the ARM architecture and x86 processors. It is sometimes loosely called a Harvard architecture, overlooking the fact that it is actually "modified".

Another modification provides a pathway between the instruction memory (such as ROM or flash memory) and the CPU to allow words from the instruction memory to be treated as read-only data. This technique is used in some microcontrollers, including the Atmel AVR. This allows constant data, such as text strings or function tables, to be accessed without first having to be copied into data memory, preserving scarce (and power-hungry) data memory for read/write variables. Special machine language instructions are provided to read data from the instruction memory. (This is distinct from instructions which themselves embed constant data, although for individual constants the two mechanisms can substitute for each other.)

In recent years, the speed of the CPU has grown many times in comparison to the access speed of the main memory. Care needs to be taken to reduce the number of times main memory is accessed in order to maintain performance. If, for instance, every instruction run in the CPU requires an access to memory, the computer gains nothing for increased CPU speed—a problem referred to as being memory bound.

It is possible to make extremely fast memory, but this is only practical for small amounts of memory for cost, power and signal routing reasons. The solution is to provide a small amount of very fast memory known as a CPU cache which holds recently accessed data. As long as the data that the CPU needs are in the cache, the performance is much higher than it is when the cache has to get the data from the main memory.

Modern high performance CPU chip designs incorporate aspects of both Harvard and von Neumann architecture. In particular, the "split cache" version of the modified Harvard architecture is very common. CPU cache memory is divided into an instruction cache and a data cache. Harvard architecture is used as the CPU accesses the cache. In the case of a cache miss, however, the data is retrieved from the main memory, which is not formally divided into separate instruction and data sections, although it may well have separate memory controllers used for concurrent access to RAM, ROM and (NOR) flash memory.

Thus, while a von Neumann architecture is visible in some contexts, such as when data and code come through the same memory controller, the hardware implementation gains the efficiencies of the Harvard architecture for cache accesses and at least some main memory accesses.

In addition, CPUs often have write buffers which let CPUs proceed after writes to non-cached regions. The von Neumann nature of memory is then visible when instructions are written as data by the CPU and software must ensure that the caches (data and instruction) and write buffer are synchronized before trying to execute those just-written instructions.

Modern uses of the Harvard architecture

The principal advantage of the pure Harvard architecture—simultaneous access to more than one memory system—has been reduced by modified Harvard processors using modern CPU cache systems. Relatively pure Harvard architecture machines are used mostly in applications where trade-offs, like the cost and power savings from omitting caches, outweigh the programming penalties from featuring distinct code and data address spaces.

Even in these cases, it is common to employ special instructions in order to access program memory as though it were data for read-only tables, or for reprogramming; those processors are modified Harvard architecture processors.