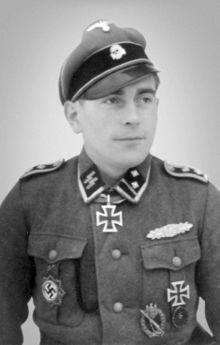 Hauptscharführer of the Waffen-SS (Gustav Schreiber)

Hauptscharführer was a Nazi paramilitary rank which was used by the Schutzstaffel (SS) between the years of 1934 and 1945. The rank was the highest enlisted rank of the SS, with the exception of the special Waffen-SS rank of Sturmscharführer.[1][2]

Translated as "head (or chief) squad leader", (the equivalent of a "Master Sergeant") Hauptscharführer became an SS rank after a reorganization of the SS following the Night of the Long Knives.[3] The first use of Hauptscharführer was in June 1934 when the rank replaced the older SA title of Obertruppführer.[4]

Within the Allgemeine-SS (general-SS), a Hauptscharführer was typically the head SS-non-commissioned officer of an SS-Sturm (company) or was a rank used by enlisted staff personnel assigned to an SS headquarters office or security agency (such as the Gestapo and Sicherheitsdienst; SD).

The insignia for Hauptscharführer was two silver pips, with a silver stripe centred on a black collar patch.[3] On field grey uniforms, the rank was worn with silver collar piping and the Wehrmacht shoulder boards of an Oberfeldwebel.