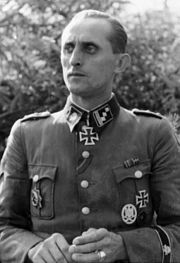 Max Seela, here as SS-Hauptsturmführer of the Waffen-SS 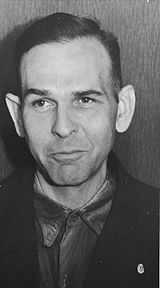 Amon Goeth in 1946, shortly before his execution

The rank of Hauptsturmführer evolved from the much older rank of Sturmhauptführer, created in 1928 as a rank of the Sturmabteilung (SA). The SS used the rank of Sturmhauptführer from 1930 to 1934 at which time, following the Night of the Long Knives, the name of the rank was changed to Hauptsturmführer although the insignia remained the same.[2][3]

Some of the most infamous SS members are known to have held the rank of Hauptsturmführer. Among them are Josef Mengele, the infamous doctor assigned to Auschwitz; Klaus Barbie, Gestapo Chief of Lyon; Joseph Kramer commandant of Bergen-Belsen concentration camp, Alois Brunner, Adolf Eichmann's assistant; and Amon Göth, who was sentenced to death and hanged for committing mass murder during the liquidations of the ghettos at Tarnów and Kraków, the camp at Szebnie and the Kraków-Płaszów concentration camp, portrayed in the film Schindler's List.