The Hawker P.1127 and the Hawker Siddeley Kestrel FGA.1 were the experimental and development aircraft that led to the Hawker Siddeley Harrier, the first vertical and/or short take-off and landing (V/STOL) jet fighter-bomber. Kestrel development began in 1957, taking advantage of the Bristol Engine Company's choice to invest in the creation of the Pegasus vectored-thrust engine. Testing began in July 1960 and by the end of the year the aircraft had achieved both vertical take-off and horizontal flight. The test program also explored the possibility of use upon aircraft carriers, landing on HMS Ark Royal in 1963. The first three aircraft crashed during testing, one at the 1963 Paris Air Show.

Improvements to future development aircraft, such as swept wings and more powerful Pegasus engines, led to the development of the Kestrel. The Kestrel was evaluated by the Tri-partite Evaluation Squadron, made up of military pilots from Britain, the United States, and West Germany. Later flights were conducted by the U.S. military and NASA.

Related work on a supersonic aircraft, the Hawker Siddeley P.1154, was cancelled in 1965. As a result, the P.1127 (RAF), a variant more closely based on the Kestrel, was ordered into production that year, and named Harrier - the name originally intended for the P.1154 - in 1967. The Harrier served with the UK and several nations, often as a carrier-based aircraft.

In 1957, the Bristol Engine Company informed Sydney Camm of Hawker that they had a project to combine their Olympus and Orpheus jet engines to produce a directable fan jet.[1] The original idea on which the engine, named Pegasus,[note 1] was based came from Michel Wibault, a French aviation consultant.[2] Several adaptions and enhancements were made by Bristol to reduce size and weight over Wibault's original concept.[3] Hawker took the planned Pegasus engine as a basis for a plane that could meet the current NATO specification for a Light Tactical Support Fighter to replace the Fiat G.91.[4][5] Prior to the P.1127 project, Hawker Aviation had been working on a replacement for the Hawker Hunter—the Hawker P.1121. However, the P.1121 was cancelled shortly after the 1957 Defence White Paper, which advocated a policy shift away from manned aircraft and towards missiles.[6]

By the end of 1958, barely eighteen months after the start of the project, all the main features of the P.1127 were developed with one exception, the reaction control system - this was resolved by April 1959.[7] As the P.1127 had been developed at a time of deep UK defense cuts, Hawker had to seek commercial funding, and significant engine development funding came from the U.S.[5][8] Wind tunnel tests conducted by NASA Langley Research Center using a sub-scale model showed acceptable flight characteristics.[5][9] Hawker test pilot Hugh Merewether went to the U.S. at NASA's request to fly the Bell X-14.[10] In March 1959, the company's board of directors (Hawker Siddeley then) decided to privately fund two P.1127 prototypes.[11] In late 1959 the British Ministry of Supply contracted for two P.1127 prototypes.[9] 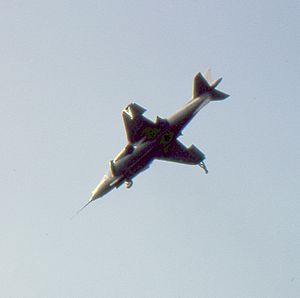 The first "P.1127 Prototype V/STOL Strike Aircraft", serial XP831, was delivered in July 1960 for static engine testing, and in October the Pegasus flight engine was made available. Prior to this Stanley Hooker had asked Camm "I suppose you are going to do some conventional flying first Sydney?" and Camm replied "What for?" Hooker said "Well you know, just to make sure the aeroplane is a nice aeroplane, and everything under control." Camm replied, "Oh, Hawker aeroplanes are always beautiful, nothing wrong with a Hawker aeroplane, not going to bother with that. Vertical first time".[12] The first tethered flight took place at Dunsfold Aerodrome on the 21 October and free flight hover was achieved on 19 November, after which the first publicity photos were released. The second prototype, XP836,[13] made its first take off conventionally on 7 July 1961. The two aircraft proceeded to close the gap between vertical take off and flight, which was achieved by 8 September 1961.[5]

Four more prototypes were ordered. Throughout this period improved Pegasus engines were being developed, with the Pegasus 3 being capable of 15,000 lbf (67 kN) of thrust. Apart from this, the first four aircraft were quite similar, but the fifth, XP980, introduced the taller fin and tailplane anhedral later seen on the Harrier.[14] The fourth machine was used in part to give the Hawker production test pilots P.1127 familiarisation.[14] The first carrier vertical landing was performed by the first prototype on HMS Ark Royal in 1963.[15] The last P.1127, XP984, introduced the swept wing.[14] It was eventually fitted with the 15,000 lbf (66.7 kN) Pegasus 5 and functioned as the prototype Kestrel.[16]

The first three P.1127s crashed, the second and third during development. The first prototype (XP831) crashed at the Paris Air Show in 1963, caused by a speck of dirt in the air feed lines of the nozzle control motor causing the engine nozzles to stick, but the aircraft was fully repaired and resumed development flying. All the pilots involved survived.[17] 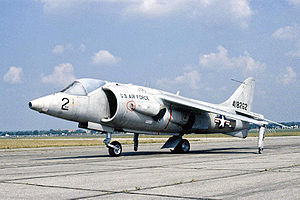 Nine evaluation aircraft were ordered as the Kestrel FGA.1, an improved version of the P.1127, the first flying on 7 March 1964. The Kestrel had fully swept wings and a larger tail than the early P.1127s,[18] and the fuselage was modified to take the larger 15,000 lbf (85 kN) Pegasus 5 engine as in the P.1127/Kestrel prototype XP984.[18] Due to interest from the U.S. and Germany, the Tri-partite Evaluation Squadron (TES) was formed on 15 October 1964 at RAF West Raynham, staffed by military test pilots from Britain, the United States and West Germany.[18]

The Kestrel's first flight was on 7 March 1964. These equipped the Tripartite Evaluation Squadron formed at RAF West Raynham in Norfolk in March 1965.[19] The Evaluation pilots developed a typical sortie routine for the Kestrel of conducting short take-offs (STO) and returning to base on vertical landings.[20] This manner of operation (STOVL) was judged to be the optimal practice.[21] Operating from rough airstrips was also trialled at nearby RAF Bircham Newton, where the aircraft proved adept at traversing boggy ground and taking off from a variety of temporary ground coverings.[22] During testing one aircraft was lost when a pilot tried to do a rolling take-off with the parking brake on;[18] the evaluations were finalised in November 1965.[23]

Six of the eight surviving evaluation aircraft (the three allocated to the U.S. plus those allocated to Germany) were transferred to the U.S.[18] for evaluation by the Army, Air Force, and Navy as the XV-6A Kestrel. After Tri-Service evaluation they were passed to the USAF for further evaluation at Edwards Air Force Base, except for two that were assigned to NASA.[24] One of the two remaining British-based Kestrels was attached to the Blind Landing Experimental Unit (BLEU) at RAE Bedford and the other, XS693, went to Blackburn for modification to take the uprated Pegasus 6 engine.[25]

In addition to some strengthening, there were alterations to the air intake, which had throughout the P.1127 and Kestrel series featured an inflatable lip to smooth the intake airflow when the aircraft was almost stationary. There were concerns about the service life of these devices, so they were replaced with conventional suction relief doors.[26] Experience gained during naval testing on board the commando carrier HMS Bulwark in 1966 convinced project officers that less reactive materials would be substituted for all uses of magnesium in the Kestrel's airframe, in any further prototypes and production aircraft.[27] The Kestrel became the prototype for pre-production Harriers.[28]

NATO requirement NBMR-3 specified a VTOL aircraft, but one with the performance of an aircraft such as the F-4 Phantom II along with VTOL capability. Hawker drafted the P.1150, a supersonic P.1127, and the P.1154, which would meet NBMR-3. The P.1154 was a winner of the NATO competition and prototype construction was already underway at the point of cancellation in 1965. The French government withdrew shortly after its selection over the Dassault Mirage IIIV.[29] The RAF then began looking at a simple upgrade of the Kestrel, and issued Requirement ASR 384 for a V/STOL ground attack jet,[30][31] known as the P.1127 (RAF).[32]

In late 1965, the RAF ordered six pre-production P.1127 (RAF) aircraft.[33] The first P.1127 (RAF) flew on 31 August 1966.[31] An order for 60 production aircraft was formally received by Hawker Aviation in early 1967; at this time the aircraft received the Harrier GR.1 designation.[33][34][35] The Harrier became a successful aircraft in British service, and was exported to several nations, often seeing usage as a carrier-based aircraft. 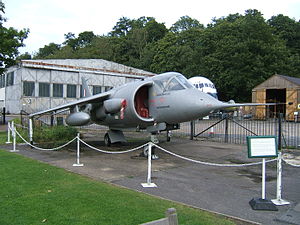 The last of the six P.1127 prototypes (XP984) and the only one with a swept wing, later converted to the first Kestrel prototype with Pegasus 5 engine. 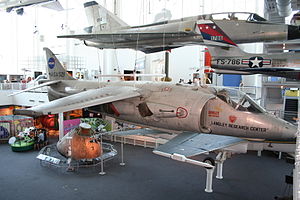