A head-mounted display (or helmet-mounted display, for aviation applications), both abbreviated HMD, is a display device, worn on the head or as part of a helmet, that has a small display optic in front of one (monocular HMD) or each eye (binocular HMD).

There is also an optical head-mounted display (OHMD), which is a wearable display that has the capability of reflecting projected images as well as allowing the user to see through it. 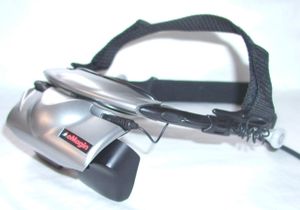 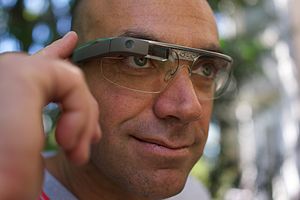 A man controls Google Glass, a type of Optical head-mounted display, using the touchpad built into the side of the device 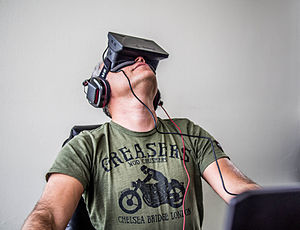 A typical HMD has either one or two small displays with lenses and semi-transparent mirrors embedded in a helmet, eyeglasses (also known as data glasses) or visor. The display units are miniaturised and may include CRT, LCDs, Liquid crystal on silicon (LCos), or OLED. Some vendors employ multiple micro-displays to increase total resolution and field of view.

HMDs differ in whether they can display just a computer generated image (CGI), show live images from the real world or a combination of both.

An optical head-mounted display uses an optical mixer which is made of partly silvered mirrors. It has the capability of reflecting artificial images as well as letting real images to cross the lens and let the user to look through it.

Ruggedized HMDs are increasingly being integrated into the cockpits of modern helicopters and fighter aircraft. These are usually fully integrated with the pilot's flying helmet and may include protective visors, night vision devices and displays of other symbology.

Military, police and firefighters use HMDs to display tactical information such as maps or thermal imaging data while viewing the real scene. Recent applications have included the use of HMD for paratroopers.[1] In 2005, the Liteye HMD was introduced for ground combat troops as a rugged, waterproof lightweight display that clips into a standard US PVS-14 military helmet mount. The self-contained color monocular OLED display replaces the NVG tube and connects to a mobile computing device. The LE has see-through capability and can be used as a standard HMD or for augmented reality applications. The design is optimized to provide high definition data under all lighting conditions, in covered or see-through modes of operation. The LE has a low power consumption, operating on four AA batteries for 35 hours or receiving power via standard USB connection.[2]

DARPA continues to fund research in Augmented Reality HMDs as part of the Persistent Close Air Support (PCAS) Program. Vuzix is currently working on a system for PCAS that will use holographic waveguides to produce see-through augmented reality glasses that are only a few millimeters thick.[3]

Engineers and scientists use HMDs to provide stereoscopic views of CAD schematics.[citation needed] These systems are also used in the maintenance of complex systems, as they can give a technician what is effectively "x-ray vision" by combining computer graphics such as system diagrams and imagery with the technician's natural vision. There are also applications in surgery, wherein a combination of radiographic data (CAT scans and MRI imaging) is combined with the surgeon's natural view of the operation, and anesthesia, where the patient vital signs are within the anesthesiologist's field of view at all times.[4] 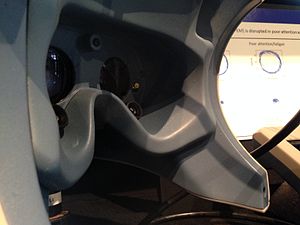 An eye-tracking HMD with LED illuminators and cameras to measure eye movements.

As of 2010, the use of predictive visual tracking measurement to identify mild traumatic brain injury was being studied. In visual tracking tests, a HMD unit with eye-tracking capability shows an object moving in a regular pattern. People without brain injury are able to track the moving object with smooth pursuit eye movements and correct trajectory. The test requires both attention and working memory which are difficult functions for people with mild traumatic brain injury. The question being studied, is whether results for people with brain injury will show visual-tracking gaze errors relative to the moving target.[5] 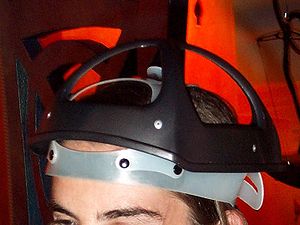 Low cost HMD devices are available for use with 3D games and entertainment applications.

One of the first commercially available HMDs was the Forte VFX-1 which was announced at CES in 1994.[6] The VFX-1 had stereoscopic displays, 3-axis head-tracking, and stereo headphones.

Another pioneer in this field was Sony who released the Glasstron in 1997, which had as an optional accessory a positional sensor which permitted the user to view the surroundings, with the perspective moving as the head moved, providing a deep sense of immersion. One novel application of this technology was in the game MechWarrior 2, which permitted users of the Sony Glasstron or Virtual I/O's iGlasses to adopt a new visual perspective from inside the cockpit of the craft, using their own eyes as visual and seeing the battlefield through their craft's own cockpit.

Sony has released the Personal 3D Viewer (or HMZ-T1), a fully surround-sound headset for 3D gaming and movies.[7]

Sensics demonstrated at CES 2012 a gaming and entertainment goggle that included an on-board Android processor as well as hand tracking to facilitate natural interaction.[8]

Many brands of video glasses can now be connected to video and DSLR cameras, making them applicable as a new age monitor. As a result of the glasses ability to block out ambient light, filmmakers and photographers are able to see clearer presentations of their live images.[9]

The Oculus Rift is an upcoming virtual reality (VR) head-mounted display created by Palmer Luckey that the company Oculus VR is developing for virtual reality simulations and video games.[10]

Headsets are also planned for use with game consoles, such as the PlayStation 4 with PlayStation VR and Xbox One with HoloLens.[11]

A HMD system has been developed for Formula One drivers by Kopin Corp. and the BMW Group. According to BMW, “The HMD is part of an advanced telemetry system approved for installation by the Formula One racing committee… to communicate to the driver wirelessly from the heart of the race pit.” The HMD will display critical race data while allowing the driver to continue focussing on the track. Pit crews control the data and messages sent to their drivers through two-way radio.[12] 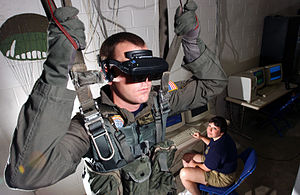 Paratrooper training with an HMD.

A key application for HMDs is training and simulation, allowing to virtually place a trainee in a situation that is either too expensive or too dangerous to replicate in real-life. Training with HMDs cover a wide range of applications from driving, welding and spray painting, flight and vehicle simulators, dismounted soldier training, medical procedure training and more. 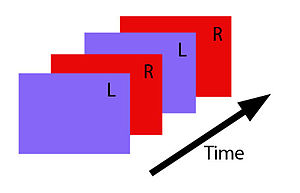 Depth perception inside an HMD requires different images for the left and right eyes. There are multiple ways to provide these separate images:

Time-based multiplexing preserves the full resolution per each image, but reduces the frame rate by half. For example, if the signal is presented at 60 Hz, each eye is receiving just 30 Hz updates. This may become an issue with accurately presenting fast-moving images.

Side-by-side and top/bottom multiplexing provide full-rate updates to each eye, but reduce the resolution presented to each eye. Many 3D broadcasts, such as ESPN, chose to provide side-by-side 3D which saves the need to allocate extra transmission bandwidth and is more suitable to fast-paced sports action relative to time-based multiplexing techniques.

Not all HMDs provide depth perception. Some lower-end modules are essentially bi-ocular devices where both eyes are presented with the same image.

3D video players sometimes allow maximum compatibility with HMDs by providing the user with a choice of the 3D format to be used.

Companies that have produced HMDs include: