Health physics or The Physics of Radiation Protection[1] is the science concerned with the recognition, evaluation, and control of health hazards to permit the safe use and application of ionizing radiation. Health physics professionals promote excellence in the science and practice of radiation protection and safety. Health physicists principally work at facilities where radionuclides or ionizing radiation are used or produced; such as medical institutions, government laboratories, academic and research institutions, nuclear power plants, regulatory agencies and manufacturing plants.

There are many sub-specialties in the field of health physics,[2] including

The field of Health Physics is a subfield of medical physics[3] and are similar to each other in that practitioners rely on the same fundamental science (i.e., radiation physics, biology, etc.) in both fields. Health physicists, however, focus on the evaluation and protection of human health from radiation, whereas medical health physicists and medical physicists use radiation and other physics-based technologies for the diagnosis and treatment of disease.[4]

Practical ionising radiation measurement is essential for health physics. It enables the evaluation of protection measures, and the assessment of the radiation dose likely, or actually received by individuals. The provision of such instruments is normally controlled by law. In the UK it is the Ionising Radiation Regulations 1999.

The measuring instruments for radiation protection are both "installed" (in a fixed position) and portable (hand-held or transportable).

Installed instruments are fixed in positions which are known to be important in assessing the general radiation hazard in an area. Examples are installed "area" radiation monitors, Gamma interlock monitors, personnel exit monitors, and airborne contamination monitors.

The area monitor will measure the ambient radiation, usually X-Ray, Gamma or neutrons; these are radiations which can have significant radiation levels over a range in excess of tens of metres from their source, and thereby cover a wide area.

Interlock monitors are used in applications to prevent inadvertent exposure of workers to an excess dose by preventing personnel access to an area when a high radiation level is present.

Personnel exit monitors are used to monitor workers who are exiting a "contamination controlled" or potentially contaminated area. These can be in the form of hand monitors, clothing frisk probes, or whole body monitors. These monitor the surface of the workers body and clothing to check if any radioactive contamination has been deposited. These generally measure alpha or beta or gamma, or combinations of these.

The UK National Physical Laboratory has published a good practice guide through its Ionising Radiation Metrology Forum concerning the provision of such equipment and the methodology of calculating the alarm levels to be used.[5]

Portable instruments are hand-held or transportable. The hand-held instrument is generally used as a survey meter to check an object or person in detail, or assess an area where no installed instrumentation exists. They can also be used for personnel exit monitoring or personnel contamination checks in the field. These generally measure alpha, beta or gamma, or combinations of these.

Transportable instruments are generally instruments that would have been permanently installed, but are temporarily placed in an area to provide continuous monitoring where it is likely there will be a hazard. Such instruments are often installed on trolleys to allow easy deployment, and are associated with temporary operational situations.

A number of commonly used detection instruments are listed below.

The links should be followed for a fuller description of each.

In the United Kingdom the HSE has issued a user guidance note on selecting the correct radiation measurement instrument for the application concerned [2]. This covers all ionising radiation instrument technologies, and is a useful comparative guide.

Dosimeters are devices worn by the user which measure the radiation dose that the user is receiving. Common types of wearable dosimeters for ionizing radiation include: 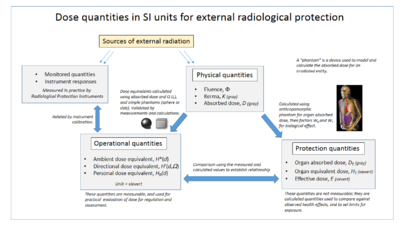 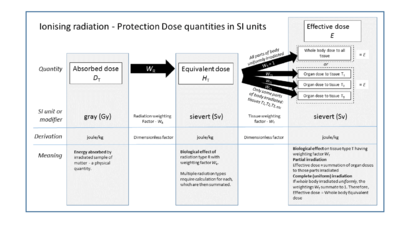 The fundamental units do not take into account the amount of damage done to matter (especially living tissue) by ionizing radiation. This is more closely related to the amount of energy deposited rather than the charge. This is called the absorbed dose.

In 1898, The Rontgen Society (Currently the British Institute of Radiology) established a committee on X-ray injuries, thus initiating the discipline of radiation protection.[10]

According to Paul Frame:[11]

"The term Health Physics is believed to have originated in the Metallurgical Laboratory at the University of Chicago in 1942, but the exact origin is unknown. The term was possibly coined by Robert Stone or Arthur Compton, since Stone was the head of the Health Division and Arthur Compton was the head of the Metallurgical Laboratory. The first task of the Health Physics Section was to design shielding for reactor CP-1 that Enrico Fermi was constructing, so the original HPs were mostly physicists trying to solve health-related problems. The explanation given by Robert Stone was that '...the term Health Physics has been used on the Plutonium Project to define that field in which physical methods are used to determine the existence of hazards to the health of personnel.'

A variation was given by Raymond Finkle, a Health Division employee during this time frame. 'The coinage at first merely denoted the physics section of the Health Division... the name also served security: 'radiation protection' might arouse unwelcome interest; 'health physics' conveyed nothing.'"

Although the United States Nuclear Regulatory Commission permits the use of the units curie, rad, and rem alongside SI units,[12] the European Union European units of measurement directives required that their use for "public health ... purposes" be phased out by 31 December 1985.[13]