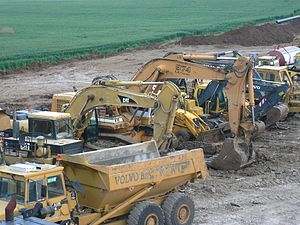 Caterpillar D9L bulldozer, excavators and other heavy equipment vehicles parking near a quarry in Israel. 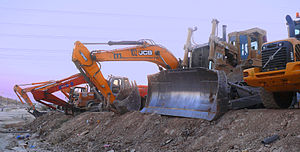 Bulldozer, excavators and other heavy equipment vehicles parking near a quarry. 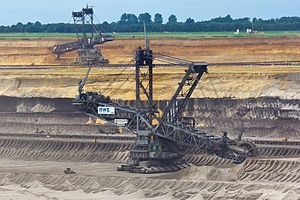 The use of heavy equipment has a long history; the ancient Roman engineer Vitruvius (1st century BCE) gave descriptions of heavy equipment and cranes in ancient Rome in his treatise De architectura. The pile driver was invented around 1500. The first tunnelling shield was patented by Isambard Kingdom Brunel in 1818.

From horses, through steam, to diesel 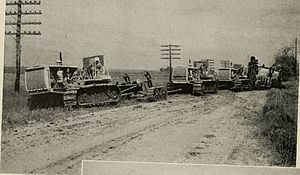 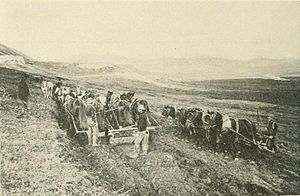 Until the 19th century and into the early 20th century heavy machines were drawn under human or animal power. With the advent of portable steam-powered engines the drawn machine precursors were reconfigured with the new engines, such as the combine harvester. The design of a core tractor evolved around the new steam power source into a new machine core traction engine, that can be configured as the steam tractor and the steamroller. During the 20th century, internal-combustion engines became the major power source of heavy equipment. Kerosene, ethanol andengines were used, but today diesel engines are dominant. Mechanical transmission was in many cases replaced by hydraulic machinery. The early 20th century also saw new electric-powered machines such as the forklift. Caterpillar Inc. is a present-day brand from these days, starting out as the Holt Manufacturing Company. The first mass-produced heavy machine was the Fordson tractor in 1917.

The first commercial continuous track vehicle was the Lombard Steam Log Hauler from 1901. Tracks became extensively used for tanks during World War I, and after the war they became commonplace for civilian machinery such as the bulldozer. The largest engineering vehicles, and the largest mobile land machines altogether, are bucket-wheel excavators, built from the 1920s.

"Until almost the twentieth century, one simple tool constituted the primary earthmoving machine: the hand shovel - moved with animal and human powered, sleds, barges, and wagons. This tool was the principal method by which material was either sidecast or elevated to load a conveyance, usually a wheelbarrow, or a cart or wagon drawn by a draft animal. In antiquity, an equivalent of the hand shovel or hoe and head basket—and masses of men—were used to move earth to build civil works. Builders have long used the inclined plane, levers, and pulleys to place solid building materials, but these labor-saving devices did not lend themselves to earthmoving, which required digging, raising, moving, and placing loose materials. The two elements required for mechanized earthmoving, then as now, were an independent power source and off-road mobility, neither of which could be provided by the technology of that time."[2]

Container cranes were used from the 1950s and onwards, and made containerization possible.

Nowadays such is the importance of this machinery, some transport companies have developed specific equipment to transport heavy construction equipment to and from sites.

These subdivisions, in this order, are the standard heavy equipment categorization. Some contractors place numbers on the side of their equipment corresponding to the category - Grader '02' - followed by a sequential number that usually corresponds to the number it was purchased, for example, 02-112, is the 112th grader a company has purchased since their founding. This allows for easy recognition of the equipment type and the relevant age. 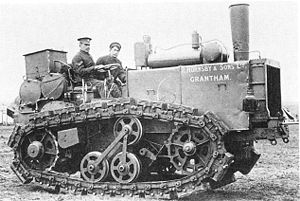 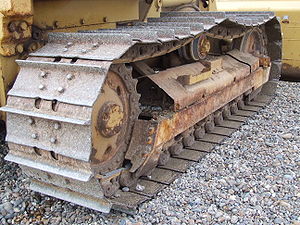 Heavy equipment requires specialized tires for various construction applications. While many types of equipment have continuous tracks applicable to more severe service requirements, tires are used where greater speed or mobility is required. An understanding of what equipment will be used for during the life of the tires is required for proper selection. Tire selection can have a significant impact on production and unit cost. There are three types of off-the-road tires, transport for earthmoving machines, work for slow moving earth moving machines, and load and carry for transporting as well as digging. Off-highway tires have six categories of service C compactor, E earthmover, G grader, L loader, LS log-skidder and ML mining and logging. Within these service categories are various tread types designed for use on hard-packed surface, soft surface and rock. Tires are a large expense on any construction project, careful consideration should be given to prevent excessive wear or damage.

"This system connects components, transmits loads, provides attachment points for implements, and allows the machine to travel over uneven ground. The machine’s frame, articulation, and steering for wheeled equipment are the major parts of this system."[1]

"The control and information systems. These systems enable the operator to direct and control all the other systems and provide information to guide operations or to monitor the performance and health of the equipment."[1]

Much publication about heavy equipment operators focuses on improving safety for such workers. The field of occupational medicine researches and makes recommendations about safety for these and other workers in safety-sensitive positions.

Due to the small profit margins on construction projects it is important to maintain accurate records concerning equipment utilization, repairs and maintenance. The two main categories of equipment costs are ownership cost and operating cost.[5]

To classify as an ownership cost an expense must have been incurred regardless of if the equipment is used or not. These costs are as follows:

Depreciation can be calculated several ways, the simplest is the straight-line method. The annual depreciation is constant, reducing the equipment value annually. The following are simple equations paraphrased from the Peurifoy & Schexnayder text:

For an expense to be classified as an operating cost, it must be incurred through use of the equipment. These costs are as follows:[6]

Die-cast metal promotional scale models of heavy equipment are often produced for each vehicle to give to prospective customers. These are typically in 1:50 scale. The popular manufacturers of these models are Conrad and NZG in Germany, even for US vehicles.

The largest manufacturers based on 2011 revenue data as published by KHL Group:[7]