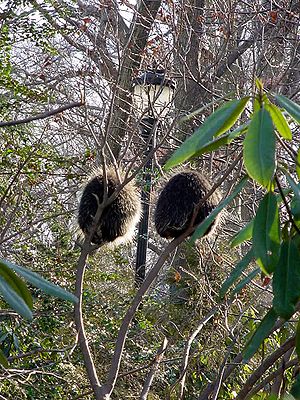 The hedgehog's dilemma, or sometimes the porcupine dilemma, is a metaphor about the challenges of human intimacy. It describes a situation in which a group of hedgehogs all seek to become close to one another in order to share heat during cold weather. They must remain apart, however, as they cannot avoid hurting one another with their sharp spines. Though they all share the intention of a close reciprocal relationship, this may not occur, for reasons they cannot avoid.

Both Arthur Schopenhauer and Sigmund Freud have used this situation to describe what they feel is the state of the individual in relation to others in society. The hedgehog's dilemma suggests that despite goodwill, human intimacy cannot occur without substantial mutual harm, and what results is cautious behavior and weak relationships. With the hedgehog's dilemma, one is recommended to use moderation in affairs with others both because of self-interest, as well as out of consideration for others. The hedgehog's dilemma is used to explain introversion and isolationism.

A number of porcupines huddled together for warmth on a cold day in winter; but, as they began to prick one another with their quills, they were obliged to disperse. However the cold drove them together again, when just the same thing happened. At last, after many turns of huddling and dispersing, they discovered that they would be best off by remaining at a little distance from one another. In the same way the need of society drives the human porcupines together, only to be mutually repelled by the many prickly and disagreeable qualities of their nature. The moderate distance which they at last discover to be the only tolerable condition of intercourse, is the code of politeness and fine manners; and those who transgress it are roughly told—in the English phrase—to keep their distance. By this arrangement the mutual need of warmth is only very moderately satisfied; but then people do not get pricked. A man who has some heat in himself prefers to remain outside, where he will neither prick other people nor get pricked himself.

It entered the realm of psychology after the tale was discovered and adopted by Sigmund Freud. Schopenhauer's tale was quoted by Freud in a footnote to his 1921 work Group Psychology and the Analysis of the Ego (German: Massenpsychologie und Ich-Analyse). Freud stated that his trip to the United States in 1919 was because: "I am going to the USA to catch sight of a wild porcupine and to give some lectures."[1]

The dilemma has received empirical attention within the contemporary psychological sciences. Jon Maner and his colleagues (Nathan DeWall, Roy Baumeister, and Mark Schaller) referred to Schopenhauer's "porcupine problem" when interpreting results from experiments examining how people respond to ostracism and other forms of social rejection.[2] Their results revealed that, for people who are chronically anxious, the experience of rejection led people to be relatively unsociable; but among people with more optimistic dispositions, the experience of rejection led to intensified efforts to get close to others. They concluded,

This last point is worth remembering when one considers the answer that Schopenhauer himself supplied to the porcupine problem. Schopenhauer suggested that people ultimately feel compelled to retain a safe distance from each other. "By this arrangement," he wrote, "the mutual need for warmth is only very moderately satisfied; but then people do not get pricked" (1851/1964, p. 226). Of course, Schopenhauer was known for his sour temperament – "It is hard to find in his life evidences of any virtue except kindness to animals... In all other respects he was completely selfish" (Russell, 1945, p. 758) – and his philosophy was famous for its pessimism.[3]