Böll was born in Cologne, Germany, to a Catholic, pacifist family that later opposed the rise of Nazism. He refused to join the Hitler Youth during the 1930s.[2] He was apprenticed to a bookseller before studying German at the University of Cologne. In 1942 he married Annemarie Cech with whom he was ultimately to have three sons; she later acted as his collaborator on a number of different translations of English and American literature into German that he produced over the years. Conscripted into the Wehrmacht, he served in France, Romania, Hungary and the Soviet Union, and was wounded four times (as well as contracting typhoid fever) before being captured by Americans in April 1945 and sent to a prisoner-of-war camp.[3]

After the war he returned to Cologne and began working in his family's cabinet shop and, for one year, worked in a municipal statistical bureau, an experience which he did not enjoy and which he left in order to take the risk of becoming a writer instead.[4]

Böll became a full-time writer at the age of 30. His first novel, Der Zug war pünktlich (The Train Was on Time), was published in 1949. He was invited to the 1949 meeting of the Group 47 circle of German authors and his work was deemed to be the best presented in 1951.[5]

Böll was extremely successful and was lauded on a number of occasions. In 1953 he was awarded the Culture Prize of German Industry, the Southern German Radio Prize and the German Critics' Prize. In 1954 he received the prize of the Tribune de Paris. In 1955 he was given the French prize for the best foreign novel. In 1958 he gained the Eduard von der Heydt prize of the city of Wuppertal and the prize of the Bavarian Academy of Arts. In 1959 he was given the Great Art Prize of the State of North-Rhine-Westphalia, the Literature Prize of the city of Cologne, and was elected to the Academy of Science and the Arts in Mainz.

In 1960 he became a member of the Bavarian Academy of Fine Arts and gained the Charles Veillon Prize.

In 1972 he received the Nobel Prize for Literature "for his writing which through its combination of a broad perspective on his time and a sensitive skill in characterization has contributed to a renewal of German literature".[7]

He was given a number of honorary awards up to his death, such as the membership of the American Academy of Arts and Letters in 1974, and the Ossietzky Medal of 1974 (the latter for his defence of and contribution to global human rights).

Böll was President of PEN International, the worldwide association of writers and the oldest human rights organisation, between 1971–1973.[8]

Despite the variety of themes and content in his work, there are certain recurring patterns: many of his novels and stories describe intimate and personal life struggling to sustain itself against the wider background of war, terrorism, political divisions, and profound economic and social transition. In a number of his books there are protagonists who are stubborn and eccentric individualists opposed to the mechanisms of the state or of public institutions.[9]

The 1963 publication of The Clown was met with polemics in the press for its negative portrayal of the Catholic Church and the CDU party.[10] Böll was devoted to Catholicism but also deeply critical of aspects of it (particularly in its most conservative incarnations). In particular, he was unable to forget the Concordat of July 1933 between the Vatican and the Nazis, signed by the future Pope Pius XII, which helped confer international legitimacy on the regime at an early stage in its development.[11]

Böll's liberal views on religion and social issues inspired the wrath of conservatives in Germany.[10][12] His 1972 article Soviel Liebe auf einmal (So much love at once) which accused the tabloid Bild of falsified journalism, was in turn retitled,[clarification needed] at the time of publishing and against Böll's wishes, by Der Spiegel, and the imposed title was used as a pretext to accuse Böll of sympathy with terrorism.[13] This particular criticism was driven in large part by his repeated insistence upon the importance of due process and the correct and fair application of the law in the case of the Baader-Meinhof Gang.[14]

The conservative press even attacked Böll's 1972 Nobel prize award, arguing that it was awarded only to "liberals and left-wing radicals."[10]

Böll was deeply rooted in his hometown of Cologne, with its strong Roman Catholicism and its rather rough and drastic sense of humour. In the immediate post-war period, he was preoccupied with memories of the War and the effect it had—materially and psychologically—on the lives of ordinary people. He made them the heroes in his writing. His Catholicism was important to his work in ways that can be compared to writers such as Graham Greene and Georges Bernanos though, as noted earlier, his perspective was a critical and challenging one towards Catholicism rather than a merely passive one.[15]

He was deeply affected by the Nazis' takeover of Cologne, as they essentially exiled him in his own town. Additionally, the destruction of Cologne as a result of the Allied bombing during World War II scarred him for life; he described the aftermath of the bombing in The Silent Angel. Architecturally, the newly-rebuilt Cologne, prosperous once more, left him indifferent. (Böll seemed to be a pupil of William Morris – he let it be known that he would have preferred Cologne Cathedral to have been left unfinished, with the 14th-century wooden crane at the top, as it had stood in 1848). Throughout his life, he remained in close contact with the citizens of Cologne, rich and poor. When he was in hospital, the nurses often complained about the "low-life" people who came to see their friend Heinrich Böll.[citation needed]

His villains are the figures of authority in government, business, and in the Church, whom he castigates, sometimes humorously, sometimes acidly, for what he perceived as their conformism, lack of courage, self-satisfied attitude and abuse of power. His simple style made him a favourite for German-language textbooks in Germany and abroad.

His works have been dubbed Trümmerliteratur (the literature of the rubble). He was a leader of the German writers who tried to come to grips with the memory of World War II, the Nazis, and the Holocaust and the guilt that came with them. Because of his refusal to avoid writing about the complexities and problems of the past he was labelled by some with the role of 'Gewissen der Nation', in other words a catalyst and conduit for memorialisation and discussion in opposition to the tendency towards silence and taboo. This was a label that he himself was keen to jettison because he felt that it occluded a fair audit of those institutions which were truly responsible for what had happened.[16]

He lived with his wife in Cologne and in the Eifel region. However, he also spent time on Achill Island off the west coast of Ireland. His cottage there is now used as a guesthouse for international and Irish artists. He recorded some of his experiences in Ireland in his book Irisches Tagebuch (Irish Journal); later on the people of Achill curated a festival in his honour. The Irish connection also influenced the translations into German by his wife Annemarie, which included works by Brendan Behan, J. M. Synge, G. B. Shaw, Flann O'Brien and Tomás Ó Criomhthain.[17]

He was the president of the then West German P.E.N. and subsequently of the International P.E.N. organizations. He travelled frequently as a representative of the new, democratic Germany. His appearance and attitude were in complete contrast to the boastful, aggressive type of German which had become infamous all over the world during Hitler's rule. Böll was particularly successful in Eastern Europe, as he seemed to portray the dark side of capitalism in his books; his books were sold by the millions in the Soviet Union alone.[18]

When Aleksandr Solzhenitsyn was expelled from the Soviet Union, he first took refuge in Heinrich Böll's Eifel cottage. This was in part the result of Böll's visit to the Soviet Union in 1962 with a cultural delegation, the first of several trips he made to the country, during which he built friendships with several writers and connections with many producers of dissident literature. Böll had previously recommended Solzhenitsyn for the Nobel Prize for Literature, under the auspices of his position in the West German P.E.N. When Solzhenitsyn was awarded the prize in 1976, he quoted from Böll's works to the reception committee.[19]

In 1976, Böll publicly left the Catholic church, "without falling away from the faith".[20]

Böll's memory lives on, among other places, at the Heinrich Böll Foundation. A special Heinrich Böll Archive was set up in the Cologne Library to house his personal papers, bought from his family, but much of the material was damaged, possibly irreparably, when the building collapsed in March 2009.[21]

His cottage in Ireland has been used as a residency for writers since 1992.[22] 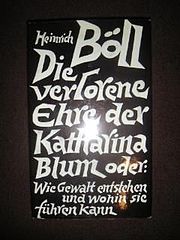