Heinrich Alexander Ludwig Peter Prinz zu Sayn-Wittgenstein[Note 1] (14 August 1916 – 21 January 1944) was a German of aristocratic descent and a Luftwaffe night fighter flying ace during World War II. A flying ace or fighter ace is a military aviator credited with shooting down five or more enemy aircraft during aerial combat.[1] At the time of his death, he was the highest scoring night fighter pilot in the Luftwaffe and still the third highest by the end of World War II, with 83 aerial victories to his credit.[Note 2]

Sayn-Wittgenstein attended numerous schools in various locations. These included a private tutor at Lake Geneva, a boarding school in Neubeuern in Upper Bavaria, a brief stay at Davos in Switzerland, and a private school in Montreux. He received his Abitur from the Realgymnasium, a higher education facility, in Freiburg im Breisgau on 17 December 1935.[3][5]

He joined the Hitler Youth on 12 April 1932 in Freiburg. On 15 January 1933, he became a Kameradschaftsführer (group leader). From Easter 1933 until fall of 1933 he led the group's military-sports activities as a Wehrsportleiter. He then became head of the instruction unit (Ausbildungsschar) until May 1934. From June 1934 he led the work unit 2/1/113 (Gefolgschaft) and received further pre-military sports training at the different camps of the unit 113 (Bann) and at the Regional Leaders' School (Gebietsführerschule).[3]

In April 1937, Sayn-Wittgenstein decided on a military career and joined the 17. Kavallerie-Regiment (17th Cavalry Regiment) in Bamberg. He transferred to the Luftwaffe in the summer of 1937 and, in October, he was accepted at the flight training school in Braunschweig. He received his officer's commission and was promoted to Leutnant (second lieutenant) in June 1938.[6] Sayn-Wittgenstein served on various air bases from where he flew the Junkers Ju 88 and the Heinkel He 111. In the winter of 1938–39 he served as a Kampfbeobachter (combat observer or navigator) in Kampfgeschwader 54 (KG 54—54th Bomber Wing) based at Fritzlar.[7][Note 3]

With the bomber arm

After the outbreak of World War II on 1 September 1939, Sayn-Wittgenstein experienced his first combat action on the Western Front in the Battle of France and, later, during the Battle of Britain. Initially he served as an observer on the He 111 H-3 from Kampfgeschwader 1 "Hindenburg," piloted by Gerhard Baeker, with whom he flew high-altitude missions against the Royal Air Force (RAF) airfield at Biggin Hill.[7]

In the winter of 1940–41, Sayn-Wittgenstein returned to pilot school and took his Luftwaffe Advanced Pilot's Certificate 2 (Erweiterter Luftwaffen-Flugzeugführerschein 2), also known as 'C2'-Certificate, confirming proficiency for blind-flying, a pre-requisite for night duty, and returned to a combat unit in March 1941. In preparation for Operation Barbarossa, the German invasion of the Soviet Union, his unit moved to Eichwalde in East Prussia. In support of Heeresgruppe Nord (Army Group North), KG 1 flew its first missions against Liepāja and then Jelgava and Riga, targeting the heavily-occupied enemy airfields.[8]

In August 1941, Sayn-Wittgenstein transferred to the night fighter force. By this time, he had flown 150 combat missions and was awarded both classes of the Iron Cross (Eisernes Kreuz), Honor Goblet of the Luftwaffe (Ehrenpokal der Luftwaffe) and the Front Flying Clasp of the Luftwaffe for Bomber crews in Gold (Frontflugspange für Kampfflieger in Gold).[8][9]

Sayn-Wittgenstein had left KG 51 by January 1942, after he had volunteered for the night fighter force and been appointed Staffelkapitän (squadron leader) of the 9./Nachtjagdgeschwader 2 (9./NJG 2—9th Squadron of the 2nd Night Fighter Wing) on 1 November 1941.[10] He claimed his first nocturnal victory—a Bristol Blenheim 40 kilometers (25 mi) west of Walcheren—on the night of 6 May 1942, while serving with the Ergänzungsgruppe (Supplementary Group) of NJG 2.[11] He shot down three aircraft in both the nights of 31 July 1942 (victories 15–17) and 10 September 1942 (victories 19–21). Sayn-Wittgenstein received the Knight's Cross of the Iron Cross (Ritterkreuz des Eisernen Kreuzes) on 7 October 1942, after 22 aerial victories.[10] The award was presented by General Josef Kammhuber, after which they both inspected the personnel of 9./NJG 2.[12] 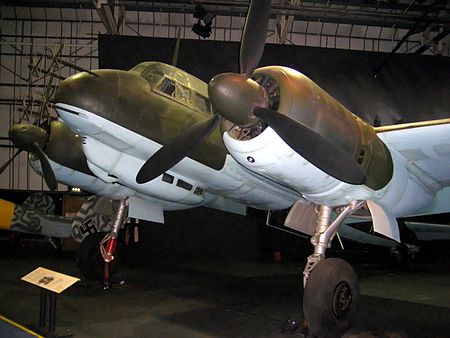 Hauptmann (captain) Sayn-Wittgenstein was moved to the Eastern Front in February 1943 after he had been appointed Gruppenkommandeur (group commander) of the IV./Nachtjagdgeschwader 5 (IV./NJG 5—4th Squadron of the 5th Night Fighter Wing) on 1 December 1942. Here Unteroffizier Herbert Kümmritz joined Sayn-Wittgenstein's crew as his radio and wireless operator (Bordfunker). Kümmritz at this time already had six months of operation experience on board a Messerschmitt Bf 110 serving with the II./Nachtjagdgeschwader 3 (II./NJG 3—2nd Squadron of the 3rd Night Fighter Wing) stationed at Stade. Kümmeritz had studied high frequency technology at the Telefunken Company in Berlin before World War II. Prior to Kümmeritz, Sayn-Wittgenstein had rejected all his previous radio operators after only a few missions.[13] In March and April 1943, Kammhuber ordered IV./NJG 5 to relocate to Rennes, France in defense of the German U-boat bases.[14]

Stationed at Gilze-Rijen the order was issued to convert to the Bf 110 night fighter. Sayn-Wittgenstein flew the Bf 110 for one short flight only, but on the night of 24 June 1943, the aircraft had technical problems and was considered unserviceable. Kümmeritz and Sayn-Wittgenstein took off in their usual Ju 88 C and shot down four Avro Lancaster bombers (victories 32–35). Sayn-Wittgenstein never flew another Bf 110 again, preferring his Ju 88 to the Bf 110.[10][14] The group was relocated to the Eastern Front again and redesignated as I./Nachtjagdgeschwader 100 (I./NJG 100—1st Squadron of the 100th Night Fighter Wing) on 1 August 1943. While stationed at Insterburg, East Prussia, Sayn-Wittgenstein shot down seven aircraft in one mission, six of them within 47 minutes (victories 36–41), in the area north-east of Oryol on 20 July 1943.[10][11]

File:Streib-Wittgenstein-Rall-Nowotny.jpg
From left to right: Hartmann Grasser, Sayn-Wittgenstein shaking hands with Adolf Hitler, Günther Rall and Walter Nowotny at the Führerhauptquartier in Rastenburg on 22 September 1943

Sayn-Wittgenstein claimed three more victories on 1 August 1943 (victories 44–46) and three more on the night of 3 August 1943 (victories 48–50). He was appointed Gruppenkommandeur of the II./NJG 3 on 15 August 1943. Sayn-Wittgenstein became the 290th recipient of the Knight's Cross of the Iron Cross with Oak Leaves (Ritterkreuz des Eisernen Kreuzes mit Eichenlaub) after 54 aerial victories on 31 August 1943. The award was presented at the Führerhauptquartier in East Prussia on 22 September 1943.[15] For these achievements he also received a letter from the commanding general of the 4. Jagd-Division (4th Fighter Division) Generalleutnant (lieutenant general) Joachim-Friedrich Huth.[16]

On 1 December 1943, Sayn-Wittgenstein was ordered to take over command of the II./Nachtjagdgeschwader 2 (II./NJG 2—2nd Groupe of the 2nd Night Fighter Wing). He was appointed Geschwaderkommodore (wing commander) of NJG 2 on 1 January 1944; he had already reached 68 aerial victories. He claimed shooting down six four-engined bombers on the same night (victories 69–74).[10] In late 1943, his wireless operator Kümmeritz went on study leave and was replaced by Feldwebel (warrant officer) Friedrich Ostheimer, who flew with Sayn-Wittgenstein from October 1943 until January 1944.[17]

On the night of 20 January 1944 Sayn-Wittgenstein claimed three enemy aircraft shot down in the Berlin area (victories 76–78). He almost collided with the third burning Lancaster which went into a dive and came very close to his own Ju 88. The Ju 88 went out of control and Sayn-Wittgenstein regained control of his just-flyable aircraft. His radio operator on this mission, Feldwebel Friedrich Ostheimer established contact with the airfield at Erfurt. Since the aircraft began stalling after the wheels and flaps went down the crew decided to belly-land the aircraft. They discovered that about 2 meters (6.6 ft) of the wing had been cut off by the Lancaster's propeller.[18][19]

The next day, 21 January 1944, Sayn-Wittgenstein, wireless operator Ostheimer and board mechanic Unteroffizier Kurt Matzuleit took off on a Zahme Sau (Tame Boar), a combination of ground controlled and airborne radar, night fighter intercept mission flying the Ju 88 R4+XM (Werknummer 750 467—factory number), which normally was assigned to the Technical Officer of NJG 2. At 22:00 contact with the first of five Lancasters was established and shot down which was observed to explode at 22:05. Between 22:10 and 22:15 the second Lancaster was shot down. Observers reported the third Lancaster exploded at approximately 22:30, followed shortly by number four, which hit the ground at 22:40. During the fifth and final attack, the four-engined bomber was burning when their Ju 88 came under attack, presumably from British fighter escorts. In the attack, their left wing caught fire. Sayn-Wittgenstein ordered his crew to jump,[20] and Ostheimer and Matzuleit parachuted to safety from the damaged aircraft.[21]

The next day, Sayn-Wittgenstein's body was found near the wreckage of the Ju 88 in a forest area belonging to the municipality of Lübars by Stendal. His parachute was discovered unopened and it was deduced that he may have hit his head on the vertical stabiliser of his aircraft when trying to escape. The death certificate listed "closed fracture of the skull and facial bone" as his cause of death. He was posthumously awarded the 44th Knight's Cross of the Iron Cross with Oak Leaves and Swords (Ritterkreuz des Eisernen Kreuzes mit Eichenlaub und Schwertern) on 23 January 1944.[21] Heinrich Prinz zu Sayn-Wittgenstein had flown 320 combat missions, 150 of which as a bomber pilot or observer. At the time of his death he was the leading night fighter pilot with 83 aerial victories, with 23 of them claimed on the Eastern and 60 on the Western Front.[10]

On 25 January 1944, Heinrich zu Sayn-Wittgenstein's death was announced in the Wehrmachtbericht, an information bulletin issued by the headquarters of the Wehrmacht. He was buried on 29 January 1944 in the Geschwader cemetery at the Deelen Air Base. His remains were re-interred in 1948. He is now resting next to Prinz Egmont zur Lippe-Weißenfeld at Ysselsteyn in the Netherlands.[22]

The question who shot down Sayn-Wittgenstein is unanswered. Friedrich Ostheimer remained convinced that they were shot down by a long range intruder de Havilland Mosquito night fighter. However, no Mosquito pilot claimed an aerial victory that night. A closer analysis reveals that three Mosquitos, two Serrate-equipped aircraft from No. 141 Squadron RAF and one from No. 239 Squadron RAF, participated in the attacks on Magdeburg. Only one Mosquito had enemy contact: No. 141's squadron Mosquito F.II, DZ303, piloted by Pilot Officer Desmon Snape with Flying Officer L. Fowler as his radar operator reported radar contact at 23:15 south of Brandenburg. After three to four minutes of pursuit they encountered a Ju 88 with its position lights on. They attacked the Ju 88 and believed to have damaged it behind its cockpit, but they did not claim a victory. This encounter exactly matches the time and area in which Sayn-Wittgenstein was killed.[23]

Night fighter pilot Wilhelm Johnen commented on the arrival of Sayn-Wittgenstein at his unit: "... A madman, I thought, as I took my leave. Once outside I got into conversation with the Prince's crew. Among other things they told me that their princely coachman had recently made his radio operator stand to attention in the plane and confined him to his quarters for three days because he (the radio operator) had lost his screen [radar contact with the enemy] during a mission."[24][25]

Herbert Kümmeritz recalled that Sayn-Wittgenstein often used his seniority and rank to ensure that he would get the best initial contact with the incoming bombers. He would often wait on the ground until the best contact was established. If another fighter had already engaged the enemy before Wittgentein arrived, the prince would announce on the radio "Hier Wittgenstein—geh weg!" (Wittgenstein here, clear off!)[26]

Wolfgang Falck felt that Sayn-Wittgenstein was not officer-material. Falck described him as: "...not the type to be a leader of a unit. He was not a teacher, educator or instructor. But he was an outstanding personality, magnificent fighter and great operational pilot. He had an astonishing sixth sense—an intuition that permitted him to see and even feel where other aircraft were. It was like a personal radar system. He was an excellent air-to-air shot."[27]

His mother, Princess Walburga, commented that: "... he was boundlessly disillusioned and boundlessly disappointed. In 1943 he contemplated the thought of shooting Hitler. It was only out of sense of honor and duty that Heinrich went on fighting, carried along by the ambition to overtake Major Lent in his score of enemy aircraft shot down".[28] In her memoirs, Tatiana von Metternich reported that Wittgenstein planned to kill Hitler after the ceremony at which he received his Knight's Cross of the Iron Cross in 1943. He said, "I am not married, I have no children—I am expendable. He will receive me personally. Who else among us can ever get as near to him?"[29]