Heinrich Gotthard von Treitschke (15 September 1834 – 28 April 1896) was a nationalist[1] German historian, political writer and National Liberal member of the Reichstag during the time of the German Empire. He was an outspoken nationalist, who favored colonialism, and opposed the British Empire, and the Catholics, Poles and socialists inside Germany.

Treitschke was born in Dresden. He was the son of an officer in the Saxon army who rose to be governor of Königstein and military governor of Dresden. Treitschke went deaf at a young age, and so was prevented from entering public service. After studying at the universities of Leipzig and Bonn, where he was a student of Friedrich Christoph Dahlmann, he established himself as a Privatdozent at Leipzig, lecturing on history and politics. At one point he became very popular with the students, but his political opinions made it impossible for the Saxon government to appoint him to a professorship.[2]

At that time Treitschke was a strong Liberal; he hoped to see Germany united into a single state with a parliamentary government, and all the smaller states swept away.

Every virile people has established colonial power. All great nations in the fullness of their strength have desired to set their mark upon barbarian lands and those who fail to participate in this great rivalry will play a pitiable role in time to come.[3]

It also discusses the Social Darwinian theories of brutal competition among races. In an essay published in 1862, Treitschke praised the "pitiless racial struggle" of Germans against Lithuanians, Poles and Old Prussians; he claimed that "magic" emanated from "eastern German soil" which had been "fertilised" by "noble German blood". While his main objective was to give historical legitimisation to germanising of Poles that found themselves under Prussian rule, the praise of a mythical migration eastward conducted by German ancestors would eventually become a means of legitimising claims to further eastern territories.[4]

In 1863 he was appointed professor at Freiburg; in 1866, at the outbreak of the Austro-Prussian War, his sympathies with the Kingdom of Prussia were so strong that he went to Berlin, became a Prussian subject, and was appointed editor of the Preussische Jahrbücher. His violent article, in which he demanded the annexation of the Kingdoms of Hanover and Saxony, and attacked with great bitterness the Saxon royal house, led to an estrangement from his father, a personal friend of the king. It was only equalled in its ill humour by his attacks on Bavaria in 1870. After holding appointments at Kiel and Heidelberg, he was made professor at Humboldt University in Berlin in 1874.[5]

In 1871, Treitschke became a member of the Reichstag, and from that time till his death he was one of the most prominent figures in Berlin.

On Heinrich von Sybel's death Treitschke succeeded him as editor of the Historische Zeitschrift. He had outgrown his early Liberalism and become the chief panegyrist of the House of Hohenzollern. He made violent and influential attacks on all opinions and all parties which appeared in any way to be injurious to the rising power of Germany. He supported Chancellor Otto von Bismarck and his to subdue the Socialists, Poles and Catholics (Kulturkampf)--the attempts were unsuccessful because the victims organize themselves and use universal male suffrage to their advantage in the Reichstag until Bismarck finally backed down.

As a strong advocate of colonial expansion Treitschke was a bitter enemy of the British Empire. He was to a large extent responsible for the chauvinistic Anglophobia feeling of the last years of the 19th century.

In the Reichstag Treitschke had originally been a member of the National Liberal Party, but in 1879 he was the first to accept the new commercial policy of Bismarck, and in his later years he joined the Moderate Conservatives, though his deafness prevented him from taking a prominent part in debate.

Treitschke was one of the few important public figures who supported antisemitic attacks which became prevalent from 1878 onwards.[6] He accused German Jews of refusing to assimilate into German culture and society, and attacked the flow of Jewish immigrants from Russian Poland. Treitschke popularized the phrase "Die Juden sind unser Unglück!" ("The Jews are our misfortune!"), which was adopted as a motto by the Nazi publication Der Stürmer several decades later. He made several antisemitic remarks such as:

The Jews at one time played a necessary role in German history, because of their ability in the management of money. But now that the Aryans have become accustomed to the idiosyncrasies of finance, the Jews are no longer necessary. The international Jew, hidden in tile mask of different nationalities, is a disintegrating influence; he can be of no further use to the world.[7]

Because of his prominent status, Treitschke's remarks aroused widespread controversy.[8]

Treitschke was held in high regard by political elites of Prussia and Chancellor Bernhard von Bülow personally declared that he kept a copy of von Treitschke's book for "several years" on his desk.[9] In 1896, Treitschke died in Berlin at the age of 61. He is buried at the Alter St.-Matthäus-Kirchhof Berlin.

Throughout his life, Treitschke supported the idea of war and racism, going as far as praising conquest of other nations and eradication of those who perish, writing "Brave peoples expand, cowardly peoples perish." and claiming that people of African heritage are "inferior"[10][11][12] Supporting the idea of humiliating conquered nations he wrote:

In the unhappy clash between races, inspired by fierce mutual enmity, the blood-stained savagery of quick war of annihilation is more humane, less revolting, than the specious clemency of sloth which keeps the vanquished in a state of brute beasts.[13] 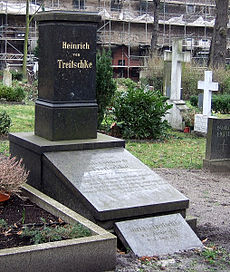 Treitschke approached political history as a German nationalist and focused on those periods and characters in which great political problems were being worked out: above all, he was a patriotic historian, and he never wandered far from Prussia. His great achievement was the History of Germany in the Nineteenth Century. The first volume was published in 1879, and during the next sixteen years four more volumes appeared; at his death he had advanced to the year 1847.

He also wrote biographical and historical essays, and essays on contemporary politics. The most important essays were collected as Historische und politische Aufsatze.[14] A selection from his more controversial writings was made under the title Zehn Jahre deutscher Kämpfe; in 1896 a new volume appeared, called Deutsche Kämpfe, neue Folge. After his death his lectures on political subjects were published under the title Politik. He also brought out in 1856 a short volume of poems called Vaterländische Gedichte, and another volume in the following year. His first works to be translated into English were two pamphlets on the war of 1870, What we demand from France (London, 1870), and The Baptism of Fire of the North German Confederation (1870).

Treitschke's students included Heinrich Class, Hans Delbrück, W. E. B. Du Bois, Otto Hintze, Max Lenz, Erich Marcks, Friedrich Meinecke, Karl Peters, Ludwig Schiemann, Gustav Schnürer, Georg Simmel and Friedrich von Bernhardi. During World War I, many writers in the West, particularly in Britain, blamed Bernhardi for creating attitudes among the political class of Germany that were seen as an incitement to war. This view was repeated and amplified by historians such as Fritz Fischer, who deemed him a chief influence on decision-makers before World War I.