Heinrich Gottfried Otto Richard von Vietinghoff, otherwise (de: genannt) Scheel (6 December 1887 – 23 February 1952) was a German Colonel-General (Generaloberst) of the German Army (Heer) during the Second World War. He was also a recipient of the Knight's Cross of the Iron Cross with Oak Leaves (German: Ritterkreuz des Eisernen Kreuzes mit Eichenlaub). He is best known for commanding the German and Italian troops in German-occupied Italy in 1945.

Vietinghoff was born in Mainz, Grand Duchy of Hesse into a family of Westphalian Uradel.[1] His military career was strongly supported by his parents, Artillery Lt. Gen. Heinrich Otto Konrad von Vietinghoff, otherwise Scheel (1857–1917) and Leona von Vietinghoff, otherwise Scheel (formerly Leona von Schmettow) (1861–1942). He joined the army at the age of fifteen, exaggerating his age in the first few years.[citation needed] 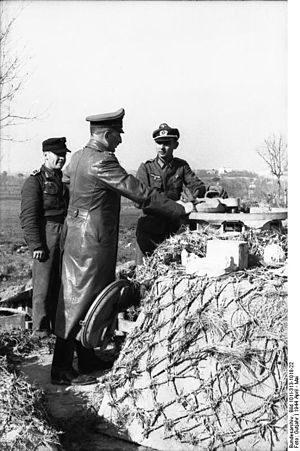 On 24 November 1938, Vietinghoff was appointed commander of the 5th Panzer Division and took part in the invasion of Poland under Wilhelm Ritter von Leeb. He was promoted to General in June 1940 after which he led the German XLVI Panzer Corps in the invasion of Yugoslavia. During Operation Barbarossa his Corps was part of Army Group Centre under Generalfeldmarschall Fedor von Bock. Vietinghoff also later served with General Heinz Guderian in the German Second Panzer Army.

From December 1941 to August 1943 he was Commander-in-Chief of the German Fifteenth Army in France (The HQ of the 15th Army is today a museum in Tourcoing, near Lille in northern France, Musée du 5 Juin 1944). In Italy from August 1943 onwards he commanded German Tenth Army, which was responsible for the telling delaying actions through the successive defensive lines built across Italy. Notable in this context were the defences on the Winter Line from November 1943 to May 1944 and the fighting in the autumn of 1944 on the Gothic Line. In October 1944 he was temporarily raised to overall command in Italy (Army Group C) when Field Marshal Albert Kesselring was seriously injured in a car crash.[2] In January 1945, on Kesselring's return, he left Italy to command Army Group Courland in East Prussia. When Kesselring was moved in March 1945 to command German Army Command West (OB West) in France, Vietinghoff returned as the supreme German commander in Italy.[3]

At the end of April 1945, he made contact with the Allied forces and on April 29, his representative General Karl Wolff signed on his behalf at the Royal Palace in Caserta the instrument of surrender on 2 May 1945 at noon. Afterwards he spent two and a half years in British captivity at Bridgend Island Farm (Special Camp XI) among numerous other German prisoners of war. He was released in September 1947.

After the war Vietinghoff was a member of the expert group dealing with the question of German rearmament. In October 1950 he wrote the Himmeroder memorandum on behalf of the Adenauer government, on West German contributions to European defence. He died on 23 February 1952 in Pfronten.[1]