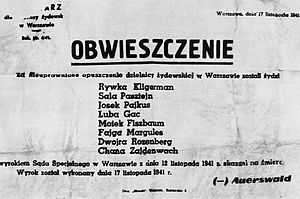 Heinz Auerswald (26 July 1908 – 5 December 1970) was a German lawyer and member of the SS in Nazi Germany, which he joined in 1933. He was "Kommissar für den jüdischen Wohnbezirk" ("Commissioner for the Jewish residential district") in Warsaw from April 1941 to November 1942. He along with Hans Biebow administrated and managed the Warsaw Ghetto's productionalist policy of economic independence providing the Ghetto with essential materials for its inhabitants continual survival until the adoption of the final solution. The Nazi strategy was to cause mass starvation in the ghetto by ensuring that if no resident "received no more than 800 calories of low-protein food per day, the entire population would be dead in nine months."[1] Under Auerswald's leadership, bodies of Jews lay in the streets of the Warsaw ghetto "as garbage" because their families could not afford to pay for funerals and destitution reached "unimaginable proportions."[2]

He was investigated by the West German government in the 1960s, but was not tried.