Heinz Reinefarth, 26 December 1903 – 7 May 1979) was a German SS commander during World War II and government official in West Germany after the war. During the Warsaw Uprising of August 1944 his troops committed numerous atrocities. After the war Reinefarth became the mayor of the town of Westerland and member of the Schleswig-Holstein Landtag. Despite Polish demands for extradition, he was never convicted of any war crimes.

Reinefarth was born in Gnesen (Gniezno), Province of Posen. After finishing the gymnasium in 1922, he joined the law faculty of the University of Jena. He graduated in 1927 and passed the 1st degree state exams. Until 1930 he completed his application at the local court in Jena and was promoted to judge. On 1 August 1932, he joined the NSDAP and received a relatively low number of party id card (1,268,933). In December of the same year he joined the SS.

Shortly before the outbreak of World War II Reinefarth was conscripted as a reserve Feldwebel. For his actions during the Invasion of Poland he received the 2nd Class Iron Cross. He took part in the 1940 campaign against France, for which he was awarded the Knight's Cross of the Iron Cross. On 20 April 1942, he was promoted to SS-Brigadeführer, the equivalent of Generalmajor in the Wehrmacht.

After promotion to brigadier, Reinefarth was appointed as General Inspector of SS in the Protectorate of Bohemia-Moravia. In September 1943, he was transferred to Berlin where he served in the Ministry of Order Police (Hauptamt Ordnungspolizei). On 29 January 1944, Reinefarth was assigned to be SS and Police Leader in Reichsgau Wartheland (Polish Poznań Voivodeship annexed by Germany in 1939). In this post he was responsible for organising repressions against Poles and other nationalities.[1] During the Warsaw Uprising he complained that his soldiers lacked ammunition to execute all prisoners.[2]

After the outbreak of the Warsaw Uprising, Reinefarth was ordered to organise a military unit consisting of personnel from various security units and head for Warsaw. Upon arrival, his forces (Kampfgruppe Reinefarth) were included in the Korpsgruppe von dem Bach of General Erich von dem Bach-Zelewski who was ordered by Heinrich Himmler to quell the rebellion. From 5 August 1944, Reinefarth's group took part in fighting in the Wola area. 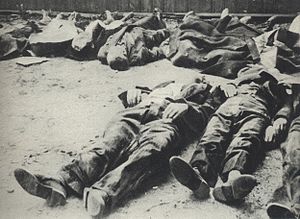 In two days, the units of Reinefarth and SS-Oberführer Oskar Dirlewanger executed approximately 60,000 civilian inhabitants of Warsaw in what is known as the Wola Massacre. In one of his reports to the commander of the German 9th Army Reinefarth stated that "we have more prisoners than ammunition to kill them".[1] After securing the Wola area, his troops took part in heavy fighting against the Armia Krajowa in the Old Town. In September, his forces were transferred to attack the boroughs of Powiśle and Czerniaków, where they committed further atrocities, including killing of POWs and wounded found in military hospitals. In all 150,000–200,000 Polish civilians were killed during the uprising. For his actions during the Warsaw Uprising Reinefarth was awarded the Oak Leaves to his Knight's Cross of the Iron Cross on 30 September 1944.

In December 1944, Reinefarth was given command over the XVIII SS Corps in the central Oder river area. Between January and March 1945, he commanded the defence of Kostrzyn nad Odrą ("Festung Küstrin"). He declined to defend it to the last man and Hitler found fault with the way he withdrew his troops. Himmler, acting on Hitler's order, had Reinefarth arrested at the end of March 1945. Later he was sentenced to death by a military court. However, the sentence was not carried out, and he continued to command those of his troops that managed to leave the fortress; they were renamed as the XIV SS Corps.

After World War II, the Polish authorities demanded his extradition. However, the British and American authorities of occupied Germany decided that Reinefarth could be useful as a witness at the Nuremberg Trial. After the trials, he was arrested for war crimes, but the local court in Hamburg released him shortly afterwards on the grounds of lack of evidence. West Germany ruled that depositions were not sufficient to secure his conviction, and also, that genocide was not in the criminal code of Nazi Germany and therefore, would not be applied retroactively.[3]

Reinefarth went on to live a normal life similar to other war criminals and Holocaust perpetrators living in West Germany including SS-Obersturmführer Arnold Strippel from Majdanek concentration camp,[4] and Oberscharführer Fiedler from Chełmno extermination camp.[5] In December 1951, he was elected Mayor of the town of Westerland, the main town on the island of Sylt. In 1962, he was elected to the parliament (Landtag) of Schleswig-Holstein.[6] After his term ended in 1967, he worked as a lawyer. Despite numerous demands by Poland, he was not extradited. Since the German courts had ruled that there was no evidence of him committing any crimes, he was considered not guilty in the eyes of the law and the federal government. He received a General's pension upon retirement.[7] He died on 7 May 1979 in his mansion on Sylt.