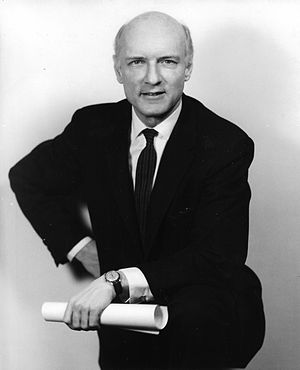 Heinz von Foerster in 1963 at the Biological Computer Laboratory, University of Illinois

Von Foerster was born in 1911 in Vienna, Austria-Hungary, as Heinz von Förster. He was the grandson of Austrian architect Emil Ritter von Foerster. He studied physics at the Technical University of Vienna and at the University of Breslau, where in 1944 he received a Ph.D. in physics.[2]

He moved to the USA in 1949, and worked at the University of Illinois at Urbana-Champaign, where he was a professor of electrical engineering from 1951 to 1975. From 1962 to 1975 he also was professor of biophysics and 1958–75 director of the Biological Computer Laboratory. Additionally, in 1956–57 and 1963–64 he was a Guggenheim-Fellow. From 1963 to 1965 he was president of the Wenner-Gren-Foundation for anthropological research.[1]

He knew well and was in conversation with John von Neumann, Norbert Wiener, Humberto Maturana, Francisco Varela, Gordon Pask, Gregory Bateson, Lawrence J. Fogel and Margaret Mead, among many others. He influenced generations of students as a teacher and inclusive, enthusiastic collaborator.

Von Foerster was influenced by the Vienna Circle and Ludwig Wittgenstein. He worked in the field of cybernetics and is known as the inventor of second-order cybernetics.[citation needed] He made important contributions to constructivism.[3] He is also known for his interest in computer music and magic.

In 1949 von Foerster started work at the University of Illinois Urbana-Champaign at the electron tube laboratory of the Electrical Engineering Department, where he succeeded Joseph Tykociński-Tykociner. With his students he developed many innovative devices, including ultra-high-frequency electronics[4]

In 1958 he formed the Biological Computer Lab, studying similarities in cybernetic systems in biology and electronics.[6]

He was the youngest member of the core group of the Macy conferences on Cybernetics and editor of the five volumes of Cybernetics (1949–1953), a series of conference transcripts that represent important foundational conversations in the field. It was von Foerster who suggested that Wiener's coinage "Cybernetics" be applied to this conference series, which had previously been called "Circular Causal and Feedback Mechanisms in Biological and Social Systems".

A 1960 issue of Science magazine included an article by von Foerster and his colleagues P. M. Mora and L. W. Amiot proposing a formula representing a best fit to available historical data on world population; the authors then predicted future population growth on the basis of this formula.[7] The formula gave 2.7 billion as the 1960 world population and predicted that population growth would become infinite by Friday, November 13, 2026 – von Foerster's 115th birthday anniversary – a prediction that earned it the name "the Doomsday Equation."

Based on population data obtained from various sources, von Foerster and his students concluded that world population growth over the centuries was faster than an exponential. In such a situation, doubling-time decreases over time. Von Foerster's tongue-in-cheek prediction of Doomsday on November 13, 2026, was based on an extrapolation into the future of doubling-time, with the finding that doubling-time would decrease to zero on that date.

Responders to his Doomsday prediction objected on the grounds of the finite human gestation time of 9 months, and the transparent fact that biological systems rarely persist in exponential growth for any substantial length of time. Those who knew von Foerster could see in his rejoinders an evident sense of humor.

Recent research has confirmed the basic soundness of von Foerster's findings.[citation needed] The hyperbolic growth of the world population observed until the 1970s has recently been correlated to a non-linear second order positive feedback between demographic growth and technological development that can be spelled out as follows:[8]