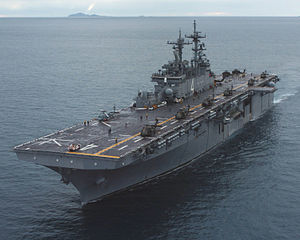 Helicopter carriers can either have a full-length aircraft deck like HMS Ocean,[1] or have a large helicopter deck, usually aft, as in the Soviet Navy's Moskva class, the Chinese Navy's Type 0891A or RFA Argus. A full-length deck maximises deck space for helicopter landing spots. Such a design also allows for a hangar deck.

Pure helicopter carriers are difficult to define in the 21st century. The advent of STOVL aircraft such as the Harrier Jump Jet have complicated the classification; the United States Navy's Wasp class, for instance, carries six to eight Harriers as well as over 20 helicopters. Only smaller carriers unable to operate the Harrier and older pre-Harrier-era carriers can be regarded as true helicopter carriers. In many cases, other carriers, able to operate STOVL aircraft, are classified as "light aircraft carriers". Other vessels, such as the Wasp class, are also capable of embarking troops such as marines and landing them ashore; they are classified as amphibious assault ships.

HMS Hermes and two of her sisters were 22,000 ton fleet carriers converted to "commando carriers" only able to operate helicopters. Hermes was later converted to a STOVL carrier.

Helicopter carriers currently in use 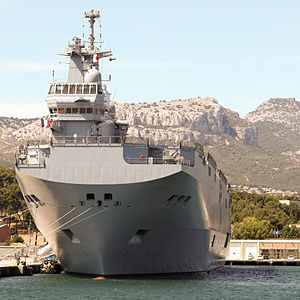 Dixmude a Mistral class helicopter carrier of the French Navy