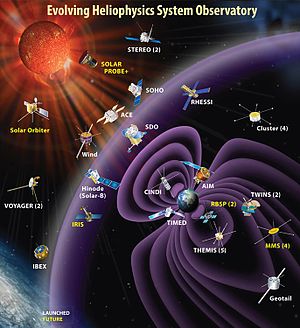 Current and future Heliophysics System Observatory missions in their approximate regions of study.
File:The 2013 Earth-Orbiting Heliophysics Fleet.ogg
Movie showing the NASA heliosphysics missions from near Earth orbit out to the orbit of the Moon.

The term heliophysics means "physics of the Sun" (the prefix "helio" (Attic Greek: helios) means Sun), and appears to have been used only in that sense until quite recently. For example, the Debrecen Heliophysical Observatory is an astronomical observatory owned and operated by Konkoly Thege Miklós Astronomical Institute of Hungarian Academy of Sciences, and has provided solar data and images of the solar surface since the middle of the nineteenth century. In the early times, heliophysics was concerned principally with the superficial layers of the star, and was synonymous with what is now more commonly called "solar physics". Usage was extended explicitly 1981 to its literal meaning, denoting the physics of the entire Sun: from center to corona. As such it was a direct translation from the French héliophysique, which had been introduced to provide a distinction from physique solaire (solar physics). It thus became a subdiscipline of heliology.[1] Early in the 21st century the meaning of the term was extended by Dr George Siscoe of Boston University to include the physics of the heliosphere (the space around the Sun beyond the corona, in principle out to the shock where the solar wind encounters the interstellar medium, but excluding the planets and other condensed bodies), although Siscoe's view of the discipline appears not to contain most of the true realm of endeavour. The term was adopted in Siscoe's restricted sense by the NASA Science Mission Directorate to denote the study of the heliosphere and the objects that interact with it—most notably planetary atmospheres and magnetospheres, the solar corona, and the interstellar medium. Heliophysics combines several other disciplines, including solar physics, and stellar physics in general, and also several branches of nuclear physics, plasma physics and space physics. The recent extension of heliophysics is closely tied to the study of space weather and the phenomena that affect it, and consequently to climatology. To quote Siscoe from a recent conference presentation:

Heliophysics [encompasses] environmental science, a unique hybrid between meteorology and astrophysics, comprising a body of data and a set of paradigms (general laws—perhaps mostly still undiscovered) specific to magnetized plasmas and neutrals in the heliosphere interacting with themselves and with gravitating bodies and their atmospheres.

NASA's restricted use of the term heliophysics has also been adopted in naming the International Heliophysical Year in 2007-2008.