Helmut Rosenbaum (11 May 1913 – 10 May 1944) was a Korvettenkapitän (LT Commander) in Nazi Germany's Kriegsmarine during World War II who commanded U-boat U-2, U-73 and the 30th U-boat Flotilla. He received the Knight's Cross of the Iron Cross, awarded to recognize extreme battlefield bravery or successful military leadership. He is credited with the sinking of six ships for a total of 35,171 gross register tons (GRT) and three warships.

Born in Döbeln, Rosenbaum joined the Reichsmarine (navy of the Weimar Republic) in 1932. After a period of training on surface vessels and service on various U-boats during the Spanish Civil War, he took command of his first U-boat in 1939. After torpedoing and sinking the HMS Eagle on 11 August 1942, Rosenbaum was appointed commander of the 30th U-boat Flotilla. He was killed in an aircraft crash on 10 May 1944.

Helmut Rosenbaum began his naval career with the Reichsmarine on 15 August 1932 as a late for the year member of "Crew 1932" (the incoming class of 1932). He underwent basic military training in the 2nd department of the standing ship division of the Baltic Sea in Stralsund (15 August 1932 – 7 October 1932).[Tr 1][Tr 2] Rosenbaum was then transferred to the training ship Edith (14 October 1932 – 21 October 1932), attaining the rank of Seekadett (midshipman) on 4 November 1932. Following a 14-month stay on board the light cruiser Köln (6 November 1932 – 2 January 1934) he advanced in rank to Fähnrich zur See (officer cadet) on 1 January 1934. Rosenbaum then underwent a number of officer training courses at the Naval Academy at Mürwik and Kiel-Wik, including navigational training cruises on the tender Weser and Nordsee, before transferring to the cruiser Königsberg (19 April 1935 – 26 September 1935). Following his stay on Königsberg he was promoted to Oberfähnrich zur See (Senior Ensign) on 1 September 1935. Rosenbaum then attended more training courses, including a naval artillery course (27 September 1935 – 3 December 1935) and an anti U-boat defense course (4 December 1935 – 14 December 1935), before being posted to the cruiser Nürnberg (15 December 1935 – 11 October 1936). During this assignment Rosenbaum received his officer's commission holding the rank Leutnant zur See (Second Lieutenant) as of 1 January 1936. His stay on Nürnberg was interrupted in February and March to attend another training course at Kiel-Wik.[1]

Rosenbaum then attended various torpedo courses at the torpedo school in Flensburg from mid October 1936 to end of January 1937. His U-boat training began on 1 February 1937 ending with his assignment as watch officer on U-35 in the Saltzwedel Flotilla on 3 April 1937. U-35 at the time was no longer under the command of Hans Rudolf Rösing[2] but rather Hermann Michahelles. 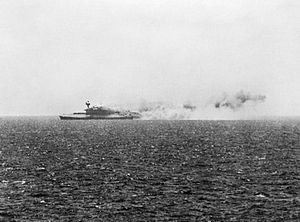 On his second patrol (25 March 1941 – 24 April 1941) on U-73 Rosenbaum departed from Lorient and attacked and sank five ships, returning to St. Nazaire after four weeks at sea.[4] He attacked convoy SC 26 on 3 April 1941 sinking the Alderpool, Indier, Westpool, and British Viscount. This achievement earned Rosenbaum a reference on 4 April 1942 in the Wehrmachtbericht (armed forces report), an information bulletin issued by the headquarters of the Wehrmacht. To be singled out individually in this way was an honor and was entered in the Orders and Decorations' section of a soldier's Service Record Book. The British 8,570 GRT Empire Endurance was sunk on 20 April 1941.

In February 1942 U-73 was heavily bombed during his first Mediterranean patrol but nevertheless managed to reach La Spezia. In August 1942, on his eighth and final patrol (4 August 1942 – 5 September 1942) on U-73, Rosenbaum attempted an attack on convoy WS 21S of Operation Pedestal bound for Malta. On 11 August 1942 he made contact and fired four torpedoes at the aircraft carrier HMS Eagle sinking her in the engagement earning him the Knight's Cross of the Iron Cross (Ritterkreuz des Eisernen Kreuzes) on 12 August 1942 and a further reference in the Wehrmachtbericht.[3]

Following his command of U-73 he took command of the 30th U-boat Flotilla on 1 October 1942. At the same time he held the position of Admiralstabsoffizier (Asto—officer of the admiralty staff) in the staff of the Admiral of the Black Sea. Helmut Rosenbaum was killed in an airplane crash on 10 May 1944 near Constanţa in Romania as commander of the 30th U-boat Flotilla. Rosenbaum was on his way to a meeting with the commanding admiral of the Black Sea.[3] Rosenbaum was posthumously promoted to Korvettenkapitän (LT Commander) on 3 August 1944 with an effective date as of 1 May 1944.[2]