Hendon Aerodrome was an aerodrome in London, England, that was an important centre for aviation from 1908 to 1968.

It was situated in Colindale, seven miles (11.3 km) north west of Charing Cross. It nearly became "the Charing Cross of the UK's international air routes", but for the actions of the RAF after the First World War. It was known as a place of pioneering experiments including the first airmail, the first parachute descent from a powered aircraft, the first night flights, and the first aerial defence of a city.

Henry Coxwell and James Glaisher were the first to fly from Hendon in a balloon called the Mammoth in 1862; and ballooning at the Brent Reservoir was a very popular spectacle for the crowds gathered on bank holidays late in the 19th century. The first powered flight from Hendon was in an 88-foot (27 m) long non-rigid airship built by Spencer Brothers of Highbury. It took off from the Welsh Harp Reservoir in 1909, piloted by Henry Spencer, and the only passenger was Muriel Matters, the Australian suffragette. The first attempt at heavier-than-air flight was by H.P. Martin and G.H. Handasyde, again at the Welsh Harp. They constructed a monoplane with four engines in the ballroom of the hotel[clarification needed], but were never able to get airborne.

Inspired by Louis Blériot’s flight across the Channel, Everett, Edgecumbe and Co began to experiment with an aircraft to be built at their works at Colindale near Hendon, erecting a small hangar to house it. From 1908 to 1910, their "Grasshopper", as the plane was called, taxied about and left the ground briefly, but failed to get truly airborne, although these attempts attracting quite a crowd.

In 1906, before any powered flight had taken place in Britain, the Daily Mail newspaper had challenged aviators to fly from London to Manchester or vice versa, offering a prize of £10,000. The journey had to be completed within twenty-four hours, with no more than two landings.[1] Aircraft and engine design had improved sufficiently by 1910 to make an attempt to win the prize realistic, and both Claude Grahame-White and the French aviator Louis Paulhan prepared for the challenge during April 1910. Grahame-White made two attempts, but it was Paulhan who succeeded. He chose a field on the future aerodrome site as his point of departure. On 27 April he flew 117 miles (188 km) from Hendon to Lichfield, easily the longest flight accomplished in the UK at that time. Before dawn on 28 April he took off and reached Burnage on the outskirts of Manchester after three hours 55 minutes in the air, during a period of just over twelve hours.[2] This was the first true flight from the Hendon site. 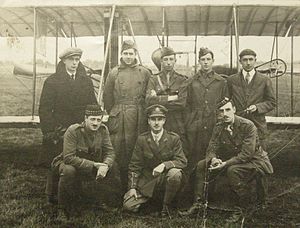 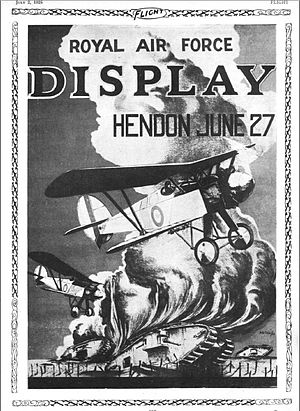 Grahame-White created a new company, the Grahame-White Aviation Company, taking control of more than 200 acres (0.81 km2) of Colindale and converting it into what could be recognised as a proper modern airfield. The first occupants were Horatio Barber's Aeronautical Syndicate Ltd and the Bleriot flying school.[3] From 9 to 16 September 1911, the first official UK airmail was flown between Hendon and Windsor as part of the celebrations of the coronation of King George V.[4]

In 1912, the first Aerial Derby started and ended at Hendon. An estimated three million people turned out across London, forming a human ring around the race circuit to see the aviators fly round the metropolis. An estimated two million of these Londoners had never seen an aircraft in flight before.[5] At Hendon Aerodrome at least 45,000 people paid for admission to the enclosures.[6]

A number of flying schools were located at Hendon, including Grahame-White's, and another established in 1914 by the American aviator George Beatty, in partnership with Handley Page Ltd.[10][11] In November 1916, the War Office commandeered the flying schools, after which the aerodrome trained 490 pilots. Claude Grahame-White and other members of the Royal Naval Air Service (RNAS) mounted a night defence of London in 1915, constituting the very first aerial defence of London.

The Aerodrome was briefly active during the Battle of Britain, but for most of World War II, the Aerodrome was mainly used for transport activities, and flying dignitaries to and from London.

RAF Hendon had three crossed runways with magnetic headings of:

These runways were removed by 1969.

Production of aeroplanes was one of the features of the aerodrome's activities under Grahame-White. During the First World War production increased rapidly. To facilitate the transportation of the 3,500 workers and materials, The Midland Railway built a spur from the embanked main line with a platform close to the main line and a loop around the airfield to the plant. It had been Claude Grahame-White’s conviction that Hendon would become "the Charing Cross of our international air routes", but the Air Ministry took over in 1922, which led to a protracted and ugly legal action lasting until 1925, when Grahame-White left the site.

The end of aviation at Hendon

The use of Hendon as an airfield was under threat even before the war, since it was considered that RAF Hendon would become a target for enemy bombing raids. After the war the airfield was increasingly unsuitable, particularly because the runways were too short, and the proximity of residential areas made matters worse. The RAF argued the military importance of the complex into the 1950s in case future developments in aviation technology might render the base suitable again, but eventually Hendon Borough Council and the London County Council were able to argue that houses were needed more than the aerodrome. The last flying unit, the Metropolitan Communication Squadron, left Hendon in November 1957.[15]

The entrance to the aerodrome can be seen in "the parade" scene in the 1967 film The Dirty Dozen, with at one point a Kirby Cadet glider of the then-resident 617 Volunteer Gliding School of the Air Training Corps launching in the background. Late in 1968, when two of the three runways had been removed, a Blackburn Beverley was flown in to be an exhibit at the new RAF Museum: this was the last aircraft to land in Hendon. The RAF station finally closed in 1987.

The site of the aerodrome is now occupied by the Grahame Park housing estate, Hendon Police College and the RAF Museum which is situated on the southeast side of the site. 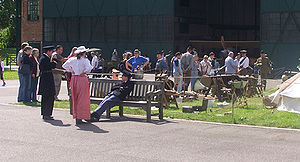 Today, Hendon houses the London branch of the Royal Air Force Museum which portrays the role of the Royal Air Force in the development of aviation and avionics in the United Kingdom. The museum consists of several buildings containing a range of permanent exhibitions including "Our Finest Hour" in the Battle Of Britain Hall which was designed, produced and installed by specialist theme park and museum designers Sarner Ltd,[16] the award winning "Milestones of Flight" which details the major developments in flight technology from 1903 to 2003, two buildings containing various aircraft and helicopters, and part of the Grahame-White Factory, which contains many examples of original aircraft from World War One and the early days of aviation.

Admission to the museum is free; there is however a car parking fee. The museum runs a programme of free events throughout the year suitable for children and young adults as well as a 3D cinema, located in "Milestones of Flight", plus exploration Gallery "Aeronauts Interactive".