Ferdinand Frederick Henri Moissan (September 28, 1852 – February 20, 1907) was a French chemist who won the 1906 Nobel Prize in Chemistry for his work in isolating fluorine from its compounds. Moissan was one of the original members of the International Atomic Weights Committee.

Moissan was born in Paris September 28, 1852, the son of a minor officer of the eastern railway company, Francis Ferdinand Moissan, and a seamstress, Joséphine Améraldine (née Mitel).[1] In 1864 they moved to Meaux, where he attended the local school. In 1870 he left the school without the "grade universitaire" necessary to attend the university. He began working for a chemist in Paris, where he was able to save a person poisoned with arsenic. He decided to study chemistry and began first at the laboratory of Edmond Frémy and later at that of Pierre Paul Dehérain. Dehérain persuaded him to pursue an academic career. He passed the baccalauréat, which was necessary to study at university, in 1874 after an earlier failed attempt. During his time in Paris he became a friend of the chemist Alexandre Léon Étard and the botanist Vasque.

He published his first scientific paper, about carbon dioxide and oxygen metabolism in plants, with Dehérain in 1874. He left plant physiology and turned towards inorganic chemistry; subsequently his research on pyrophoric iron was well received by the two most prominent French inorganic chemists of that time, Henri Etienne Sainte-Claire Deville and Jules Henri Debray. After Moissan received his Ph.D. in 1880, his friend Landrine offered him a position at an analytic laboratory. His marriage, to Léonie Lugan, took place in 1882. They had a son in 1885. During the 1880s, Moissan focused on fluorine chemistry and especially the production of fluorine itself. He had no laboratory of his own, but used several laboratories, for example that of Charles Friedel. There he had access to a strong battery consisting of 90 Bunsen cells which made it possible to observe a gas produced by the electrolysis of molten arsenic trichloride; the gas was reabsorbed by the arsenic trichloride. The electrolysis of hydrogen fluoride yielded fluorine on June 26, 1886. The French academy of science sent three representatives, Marcellin Berthelot, Henri Debray, and Edmond Frémy, to verify the results, but Moissan was unable to reproduce them, owing to the absence from the hydrogen fluoride of traces of potassium fluoride present in the previous experiments. After resolving the problem and demonstrating the production of fluorine several times, he was awarded a prize of 10,000 francs. In subsequent years, until 1891, he focused on the study of fluorine chemistry. He discovered numerous fluorine compounds, such as (together with Paul Lebeau) SF6 in 1901. His research in the production of boron and artificial diamonds and the development of an electrically heated oven capable of reaching 3500°C using 2200 amperes at 80 volts followed by 1900.

His newly developed arc furnace led to the production of borides and carbides of numerous elements (e.g. silicon boride), another of his research areas.

The existence of the element fluorine had been well known for many years, but all attempts to isolate it had failed, and some experimenters had died in the attempt.

Moissan eventually succeeded in preparing fluorine in 1886 by the electrolysis of a solution of potassium hydrogen difluoride (KHF2) in liquid hydrogen fluoride (HF). The mixture was needed because hydrogen fluoride is a nonconductor. The device was built with platinum/iridium electrodes in a platinum holder and the apparatus was cooled to −50°C. The result was the complete isolation of the hydrogen produced at the negative electrode from the fluorine produced at the positive one.[2][3] This is essentially still the way fluorine is produced today. For this achievement, he was awarded the Nobel Prize in 1906. Late in his life, the government of France named him a Commandeur de la Legion d'honneur. 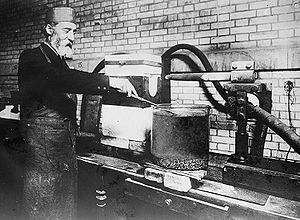 Moissan went on to study fluorine chemistry in great detail, contributed to the development of the electric arc furnace and attempted to use pressure to synthesize diamonds [4] from the more common form of carbon. In 1893, Moissan began studying fragments of a meteorite found in Meteor Crater near Diablo Canyon in Arizona. In these fragments he discovered minute quantities of a new mineral and, after extensive research, Moissan concluded that this mineral was made of silicon carbide. In 1905, this mineral was named moissanite, in his honor. In 1903 Moissan was elected member of the International Atomic Weights Committee where he served until his death.[5]

He died suddenly in Paris in February 1907, shortly after his return from receiving the Nobel Prize in Stockholm. His death was attributed to an acute case of appendicitis.