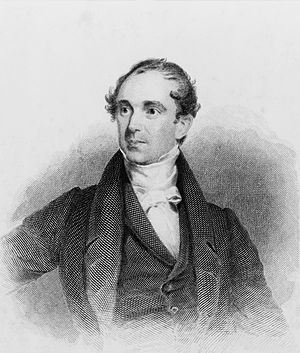 Henry Dilworth Gilpin (April 14, 1801 – January 29, 1860) was an American lawyer and statesman of Quaker extraction who served as Attorney General of the United States under President Martin Van Buren.

He was the son of Joshua Gilpin and Mary Dilworth, and was born in Lancaster, England, just before his parents returned to America. His father had been on extended tour of Britain and Europe, lasting from 1795 to 1801, during which he obtained information about the new manufacturing methods used in paper-making for his family paper mills on Brandywine Creek in Delaware. His mother was from the Quaker Dilworths of Lancaster, England.

The family returned to England for another tour in 1812, and returned to the United States in about 1816, during which time Henry attended school near London. After graduating from the University of Pennsylvania, he studied law with Joseph R. Ingersoll and was admitted to the bar in 1822. He served as U.S. Attorney for the Eastern District of Pennsylvania from 1831 to 1837, and then as Solicitor of the United States Treasury in 1837.[1] During this time he joined the American Philosophical Society and from 1833 to 1835 he was on the board of the Bank of the United States.

President Martin Van Buren named him 14th Attorney General of the United States in 1840. He served until 1841, during which time he presented the U.S. government's side of the Amistad case to the U.S. Supreme Court.

From 7 June 1852 until 13 June 1859 he was president of the Pennsylvania Academy of Fine Arts and a vice president and trustee of the Philadelphia Historical Society, and from 1856 to 1858 he was also a director of Girard College. He was also a secretary and director of the Chesapeake and Delaware Canal. Gilpin died in Philadelphia in 1860.