Herbert Otto Gille (8 March 1897 – 26 December 1966) was a German general, and as a winner of the Knight's Cross of the Iron Cross with Oak Leaves, Swords and Diamonds (German: Ritterkreuz des Eisernen Kreuzes mit Eichenlaub, Schwertern und Brillanten) and of the German Cross in Gold, the most highly decorated member of the Waffen-SS during World War II. By the end of the war he held the rank of SS-Obergruppenfuhrer und General der Waffen-SS and was the last regular officer of the Waffen-SS to be promoted to that rank with date of rank from 9 November 1944.[1]

After the war, Gille became active in HIAG, a lobby group and a revisionist veteran's organisation founded by former high-ranking Waffen-SS personnel in West Germany in 1951.

Born in Gandersheim, Gille began his military career as a first lieutenant in the artillery branch during the First World War and won the Iron Cross First and Second Classes. He left the army in 1919 and remained a civilian working in agriculture and as a car dealer until 1931 when he joined the Nazi Party and the SS.

In 1934 he was re-activated by the SS combat support forces. He became a Company Commander in Ellwangen, then a Battalion Commander of the SS regiment Germania in Arolsen. He later served as the commander of an artillery unit in Jueterbog. As the commander of the 1st Battalion of the SS-V Artillery Regiment Gille participated in the invasion of Poland and in the western campaign. In 1940 he took over the artillery regiment of the 5th SS Panzer Division, led by SS Obergruppenführer Felix Steiner.

With his regiment, Gille participated in the Operation Barbarossa in 1941 and in advance to Kuban in 1942; he received the Knight's Cross on 8 October 1942. He then took command of the Wiking Division (5th SS Panzer Division) on the Eastern Front. Early in 1944, Gille participated in the breakout of the Group Stemmermann during the Korsun encirclement, also known as the Cherkassy Pocket. Gille received the diamonds to his Knight's Cross with Oak Leaves and Swords on 19 April 1944. Shortly after, Gille and members of his staff were flown into the encircled town of Kovel to organize its defense. 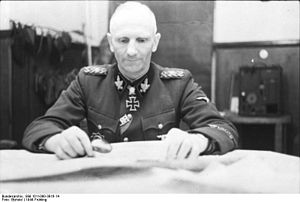 His troops stood strong on the East Prussia border with the 3rd SS Panzer Division and prevented the planned Soviet breakthrough to Berlin in the autumn of 1944 destroying large numbers of Soviet tanks.[citation needed] In January 1945 Gille, as leader of the IV SS Panzer Corps comprising the 3rd and 5th SS Panzer Divisions, was sent to Hungary to attempt to relieve the encircled city of Budapest. However, his troops were unable to break through to the city. In March 1945 he led the IV SS Panzer Corps in the failed Lake Balaton Offensive and following the Soviet counter-offensive his corps was forced to retreat into Austria.

When the end of war was clear, he marched towards the U.S. troops in order to avoid surrendering to Soviet forces. He was held by the U.S. for three years, and released in May 1948.

Despite being an early Nazi Party member, Gille was known for his apolitical views. The author Heinz Höhne in The Order under the Death Head characterized Gille as an enigma and "Nur-Soldat" (soldier – nothing else) who once threatened a newly assigned Weltanschauungsoffizier (political indoctrination officer) with a clean-out squad to gather his uniforms and other possessions and throw them and the officer out of the unit.[citation needed]

After the war Gille worked for a newspaper until 1958. He also owned a small bookshop.

In the early 1950s, Gille became active in HIAG, a lobby group and a revisionist veteran's organisation founded by former high-ranking Waffen-SS personnel in West Germany to campaign for their legal, economic and historical rehabilitation. Gille, alongside Felix Steiner, Otto Kumm and Paul Hausser, became an early leading figure within HIAG.[2]

in 1951 Gille launched the periodical Wiking-Ruf ("Viking Call"). Initially it was aimed at the veterans of the SS Division Wiking. Within its first year of existence, in 1952, it became the official publication of HIAG and was eventually renamed to Der Freiwillige ("The Volunteer").

Gille faced his share of controversy with the organisation. In 1952, HIAG held its first major meeting in Verden. It began respectably, with Gille announcing that the veterans were ready to 'do their duty for the Fatherland' and Steiner declaring support for 'freedom, order and justice'. But the next speaker delivered a different message. Former paratroop general Hermann-Bernhard Ramcke, who had been invited to demonstrate so-called solidarity with the Wehrmacht, condemned the Western Allies as the 'real war criminals' and insisted that the blacklist on which all former SS members then stood would soon become 'a list of honor'.[3] The outburst caused a furor within West Germany. Periodicals as far as the U.S. and Canada carried headlines Hitler's Guard Cheers Ex-chief and Rabble-Rousing General Is Worrying the Allies, with the latter article reporting that Ramcke's speech had been greeted with "roars of approval and cries "Eisenhower, Schweinehund!" ("Pig – Dog")".[4][5]

Internal disagreements began to emerge within HIAG in the mid-1950s as to the stance of the organisation: Steiner and Gille favored a more political, outspoken orientation, while the rest of the leadership favored a moderate approach so that not to jeopardize HIAG's goals of legal and economic rehabilitation, which, in their opinion, could only come from the establishment.[6]

On 26 December 1966 Gille died of a heart attack in Stemmen, near Hannover. He was buried at the local cemetery in Stemmen; however, his grave no longer exists.

Summary of his career